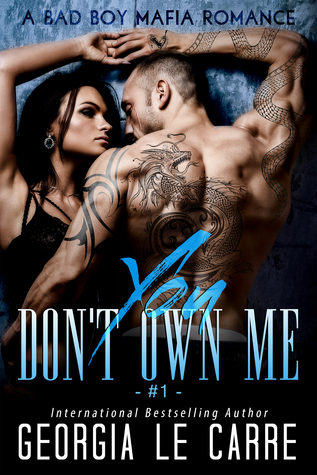 I knew I should have listened to my inner voice. I should never have said yes to helping out my friend, but I did, and the Russian with the dangerous eyes shocked me by how easily he stirred outrageous desires in my body and made me lose complete control. I did the only thing I could. I walked (all right, I ran) away to the sound of his cheap parting shot, ‘you'll be back when you need my help.’

But I haven’t been able to run away from him in my dreams. God knows I’ve tried. Then something unthinkable happens. My sister goes missing while on a backpacking trip, and the ruthless predator is the only one who can help.

He sits in his study, a beautiful, powerful man with eyes cold enough to freeze my blood.
He says he can help, but nothing is for free …

But I'm not a man given to doing favors. I'm an opportunist. There's always a price for my help.

Check out the sneak preview of the first three chapters of this two book series in Dirty Aristocrat. 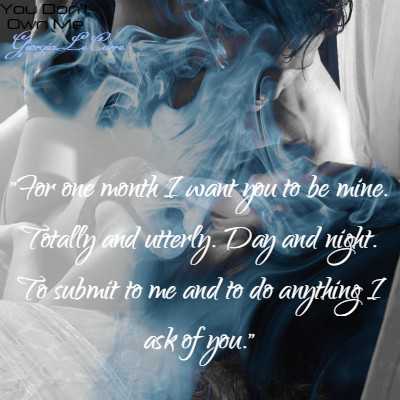 I’ve read this author before so I already knew that she knows very well how to write a great, steamy intriguing story. After reading the blurb I just knew I had to meet this ‘ruthless predator’ named Zane. One again, Georgia Le Carre delivered a sexy as hell, addicting story that kept my attention from start to finish. With a steady pace, engaging, well portrayed characters and hot as hell sexy scenes, ‘You Don’t Own Me’was entertaining as f@ck.

Dahlia meets the Russian mobster Aleksandr Malenkov aka Zane when she’s asked by her best friend to cover one of her massage appointments. She never expected to be so attracted to such a man. She doesn’t know much about Zane, but she can’t tell he’s dangerous. Their first encounter leaves Dahlia with her mouth hanging open. Not only because Zane confuses her for a prostitute, but also because she’s taken aback by his commanding attitude and his sexual power he seems to has over her.

“He pulls me towards his naked body until his rock hard cock twitches against my belly.
A strange languor overtakes me, and I am suddenly struck by the desire to submit. To let him have his way. To let him fuck me hard. Because I know it will be a hard fuck.”

When her sister goes missing on a hiking trip in Australia, Dahlia is desperate. When she doesn’t have a choice she turns to Zane for help. Zane is willing to help her, but makes very clear that nothing is for free. He will help her if she accepts to be his sexual slave mistress for a month.

“Why do you hesitate? You know you want it.
‘To be your sexual slave?’ My voice is hoarse.
To lose control. To have dirty animal sex. To come so hard you can’t stop.”

I enjoyed this one! It was exactly what I wanted – a steamy, entertaining read with two likeable well, developed characters and scorching chemistry. To be honest I found the plot to be a little underdeveloped, but I didn’t care at all since I enjoyed very much the steam aspect.

Dahlia was a likable heroine. She was naïve at times, but not too naïve to get on my nerves, sweet, caring and overall a strong, independent young woman. I loved her feistiness and her stubbornness. She definitely gave as good as she got and I enjoyed that. I liked her attitude when it came to our hero. She wasn’t really afraid of him and even if, like I mentioned above she was a little naïve she wasn’t a doormat.

“He is like an ache … an itch that hasn’t been taken care of.”

Zane was sex on a stick. Possessive and controlling, a truly alpha man he knew what he wanted from the start. Sure, at first he was cold, crude and arrogant with Dahlia, but soon after his attitude towards her changed…kind of.

I loved the passion between these two. They were hot as hell together. Every one of their sexy encounter was deliciously sexy and left me wanting more. There are also some sweet and tender moments between them that I really liked. I’m looking forward to read the next installment.