***Warning. This book contains extreme violence, and scenes that may upset some readers. ***

Jude Pearson could just as well kill me as kiss me most days. He was my captor, my living hell, and yet, he became my saviour, my heart. Stupid. Hes heartless, conditioned to feel nothing, and so I ran... straight into the clutches of his enemy. Joe Campbell wants Jude to suffer, and I just became a pawn in a very dangerous game.

Joe has broken me in every way, everything that I once was stripped away, and in its place is festering hatred and a rage so cold I feel nothing else. I have one purpose. Revenge.

Love makes you weak, it makes you irrational. She was collateral, completely innocent when she was unwillingly dragged into my corrupt world. With the damage Id already caused her, I couldnt let her love me, so I let her go, and now...he has her.

No matter where she is, she will always be mine. This man has taken every-fucking-thing from me, and he has the last thing that matters to me. I will kill him. Slowly. Joe Campbell better run because the devil is fucking coming for him.

Our Wrath binds us, but it may also break us. 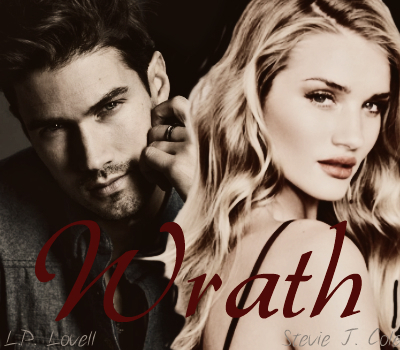 “Wrath” is the second and final installment in this crazy series and picks up right where the first book, – “Wrong” ended. This second book was f@ck-up, intense, angsty, suspenseful and like I mentioned above all kinds of crazy. I’ve been left a couple of times with my mouth hanging open, which obviously I enjoyed, but there were times when I actually wanted to throttle these characters.

“…you know what they say about love… it is the greatest of weaknesses. You just became the weapon I need to destroy him.”

So…despite the feelings she has for Jude, Tor decided to leave him. She knows is better for everyone, so she plans to move back to England. But at the airport she is kidnapped by Joe, the man who destroyed Jude’s family and who wants to destroy Jude as well. Joe is an evil despicable human being and he knows if he wants to destroy Jude, he first has to destroy Tor. Tor is held captive and with every day she’s destroyed more and more.

In the meantime, Jude is willing to do ANYTHING to save Tor, the women who made him feel alive for the first time in years.

“She is the only thing in my life that has ever felt right. It’s fucked up, and it’s wrong, but I love her. She’s fucking everything. “

Tor’s life had been f@cked-up when firstly her boyfriend practically sold her and secondly when she was kidnapped by Joe. But her life gets worse when she is forced by circumstances to keep an important secret from Jude.

Oh my…this one was intense and darker than the first installment and I honestly enjoyed that. What happened with Tor was heartbreaking and all the “visuals” really made me sick. Poor Tor…I liked her in this second book. At times she was like any woman would have been in her situation – scared sh*tless, but at times she was stronger than I actually expected her to be. Honest to God, I totally understood her need for revenge. I would have though and done the same.

If you liked Jude in book1, you will definitely like him more (or even loved him a little) here. His character was well written and for the most part his character had depth. He was simply great with Tor at some point in the story. His need to take her pain away, to heal her warmed my heart and he won me over with his care and gentleness.

The pace of the story was great and the storyline was pretty interesting, but I have to say what happened for a good part of the story wasn’t believable at all. I know it’s fiction, but some parts and aspects of the story were totally ridiculous and OTT. I won’t go into details here, because I don’t want to spoil the experience for anyone, but come on…I rolled my eyes continuously reading the last 20%. I actually thought I was reading another book. Needless to say the ending which was also too rushed for my liking didn’t work for me like at all.

That being said, this second book in the series was good enough, but obviously it wasn’t my favorite book by these two authors.