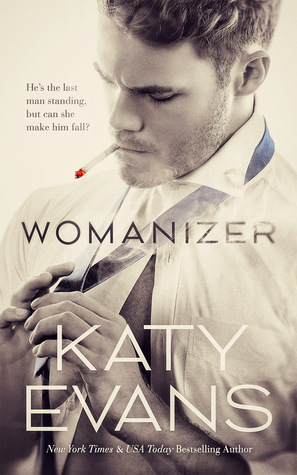 From New York Times and USA Today bestselling author Katy Evans comes a brand new contemporary romance. WOMANIZER is a full standalone, and no other books in the series need to be read.

We were just two strangers. Facing a forbidden attraction, a chemical connection. Neither of us expected or wanted it to amount to more.
But I had never been drawn to a guy the way I was drawn to this one: my brother's best friend, and CEO of the company where I interned.
Even knowing I should stay away, I proved to be too human, after all.
The chemistry was amazing.
The laughs were incredible.
I opened up to him in more ways than I'd opened up to anyone before.
But sex was as far as I'd go.
Just sex because he was too irresistible.
Just sex because I wouldn't be falling for him.
Just sex because I'd leave in three months, and I'd like for my brother not to kill me, and for nobody to find out he was my wicked little secret.
He wasn't the One.
He was just a womanizer.
But for a time, he would be mine.

‘Womanizer’ is the fourth installment in Katy Evans’s series entitled ‘Manwhore’ and features another sexy, manwhore we met before in the previous installments, Callan Carmichael. Katy Evans delivered one sexy, forbidden romance that sucked me in from the very beginning. The one who stole the show for me here was our hero, Callan, who I guarantee will charm the pants off you from the start.

“Love is an illusion. The more you want it, the more it hides”.

Olivia is a 22 years old young woman, who helped by his brother, gets a three-month internship at Carma Inc., a conglomerate of ten-plus huge multibillion-dollar companies involving media, real estate, worldwide investments, and takeovers. Olivia is determined not only to keep her job, but also to climb the ranks on her own merit, even is the CEO is one her brother’s best friends. She has a plan – collecting as much experience as she can in these three months, return to her home town and work for a local company or maybe start her own business.

“I’m not the Devil… I just choose to allow some people to believe that I am.”

One day, on the company’s terrace, she meets the “Hot Smoker Guy”, a gorgeous man who intrigues her like no other. They continue spending some time together every day for a little while, eventually sharing one hot passionate night together. The next day, Olivia finds out the stranger is the one and only, Callan Carmichael, her boss’ boss and her brother best friend. She tries to avoid him at any cost, but Callan has other plans. His new infuriating, sexy employee intrigues him too much for him to stay away, so he’s more determined than ever to make Olivia stay in his bed for the duration of her stay. But Neither of them expects their fling to become something more, their attraction to be so powerful or their plans to be turn upside down by the other.

“Keeping my hands off you is testing my willpower to an extent beyond my limits.” He slips his hand on my thigh, squeezing it. “I want you nightly.”

I enjoyed this one! Olivia and Callan were sexy as f@ck together. I loved the sensual electricity between them and don’t get me started on their sexy times. These two were so sexy and passionate together. I loved all the sex scenes which were well written and detailed.

Callan was a fantastic hero. He was sexy and charming, mysterious and passionate and won me over from the very beginning. He was sweet, loyal and protective and overall, pretty great. Olivia was just an okay character to me. I found her to be a little immature and naïve at times, so unfortunately, I can’t say I connected with her as much as I would have liked. I was a little bothered as well by her inner dialogue which I found to be a little annoying.

Personally, I would have liked more chapters from Callen’s POV, because to be honest, the chapters from his point-of-view were more interesting and well done than Olivia’s. Also, I wouldn’t have minded more angst and even more drama. Just saying!

Overall, ‘Womanizer’ was a quick, sweet and sexy story with great characters and a lovely romance!

Katy Evans is a New York Times, USA Today, and Wall Street Journal bestselling author. Her debut REAL shot to the top of the bestselling lists in 2013 and since then 9 of her titles have been New York Times bestsellers. Her books have been translated into nearly a dozen languages across the world.