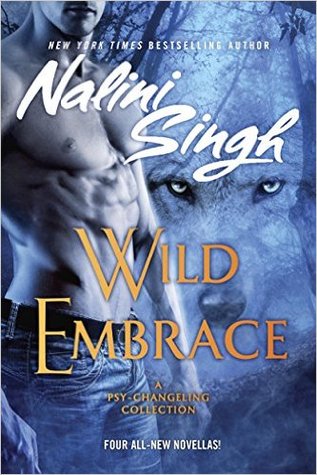 Echo of Silence
In a deep-sea station, Tazia Nerif has found her life’s work as an engineer, keeping things running smoothly. But she wants nothing more than to break down the barrier of silence between her and her telekinetic Psy station commander...

Dorian
A changeling who can never shift lives a life of quiet frustration—until he learns how to let his leopard come out and play...

Partners in Persuasion
Still raw from being burned by a dominant female, wolf changeling Felix will never again risk being a plaything. But for dominant leopard Dezi, he’s the most fascinating man she’s ever met. She just has to convince this gun-shy wolf that he can trust the dangerous cat who wants to take a slow, sexy bite out of him…

Flirtation of Fate
Seven years ago, Kenji broke Garnet’s heart. Now the wolf packmates have to investigate the shocking murder of one of their own. And the more Kenji sees of the woman Garnet has become, the deeper he begins to fall once more. But even his primal instincts are no match for the dark secret he carries...

I was originally going to rate this 2/2.75 stars, but I decided to bump it up after sleeping on it.

Quite frankly, I think it’s just me on this one. So take any comments from here with a grain of salt.

This book contains four separate novellas, so I’ll say a lil somethin’ somethin’ about each one.

I don’t know what it was about this one…

This is one of my ALL time favorite series; but I’ve said it before in my reviews for both Heart of Obsidian and Shield of Winter:

Books about Psy/Psy and Psy/Human pairings are just too sterile for me. They bore me to fucking tears.

Of course, Obsidian was an exception to this for me, but that’s because, well, Kaleb. So even though the story line in this one was cool and I appreciated the progression between Tazia and Stefan…Stefan was no Kaleb…and I found myself skimming.

For everyone else who doesn’t have my Psy/Psy “glitch,” I think you’ll really like this one.

This was probably my favorite novella in this collection.

I LOVE Dorian and it was so amazing to watch his dream come true.

However…once Lucas made an appearance I found myself…

And I had a hard time staying interested in Dorian when I really wanted to go follow Lucas around.

When I was reading the blurb for this novella before it came out, I had a feeling I wouldn’t love this one.

And I was right.

I’m sorry, but I just like my changeling men to be alpha.

So reading about a a submissive male – who is a LEGIT submissive – was just not my jam.

And then, Hawke made appearance.

There went my attention.

Hawke is my ultimate and, after his appearance, all I wanted was…more Hawke appearances.

Of all the novellas in this collection, this was the one I was most looking forward to.

I always though Kenji was entertaining in previous books and I was excited to read his and Garnet’s story.

However, once again, I was thwarted by my own damned self.

I know, Self, we just can’t take you anywhere.

Kenji was classified as a bit of a player in this one, despite having feelings for Garnet since forever; however, of course, he was “damaged” and acting the player to save her from himself.

You know, for her.

So Garnet was of course stuck with the sadz.

And I was stuck with a heavy case of Deja Poo. Now, if it was only that, I would have been fine.

But back in the day, Kenji did Garnet wrong. And yet, it’s Garnet chasing Kenji on this one, when I would have preferred to be the other way around.

After all, he jacked her around in the past so I feel like he should put in some fucking work to get her back, you know?

I wanted some grand gestures.

But then, the final problem?

Hawke showed up yet again.

What can I say?

Overall, I think all other fans of the series will love this collection. And I’m really bummed I didn’t.

But, like I said above, I really do think it’s just me in this case.

So to be clear: I am NOT discouraging anyone from reading this. Quite the opposite actually.

Singh is one of my top authors. Her writing is always flawless and the world she has built here is simply amazing.

All of that remains true in this collection – I just couldn’t connect – trivial as the reasons for that may be.