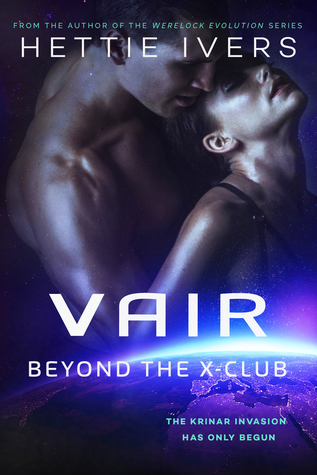 Well... not when you pen an exposé on said alien sex club—carefully omitting the fact that the experiences detailed therein are yours rather than based on the firsthand accounts of nameless interviewees, as your article claims.

And not when the alien club owner you had the wildest night of your life with shows up bearing video footage of your most intimate moments together that refute this.

Amy has two choices: Be exposed as a fraud just as her journalism career is taking off, or agree to Vair’s wicked blackmail terms in exchange for his silence and protection from Krinar authorities.

For a young journalist on a mission to prove her worth, it was always about landing the next big story. Until it became all about playing sex games with a possessive extraterrestrial.

Vair: Beyond the X-Club is a short novel (45K words) set in the world created by Anna Zaires in her Krinar Chronicles, featuring characters introduced in her novelette/short story, The X-Club. The distribution of this work is made possible by special license through the Kindle Worlds publishing program.

If you follow my reviews, you know that Anna Zaires is one of my favorite authors.

The Krinar Chronicles, which takes place in a kind of post-apocalyptic future where a more technologically advanced and socially developed alien race – the Krinar – has come and kind of taken over Earth and all of humanity, is but one of her amazing series.

Now, if you haven’t read it, I realize that the above description makes it sound super fucking janky.

And that it is probably giving you visions of poorly made B movies with green alien tentacles and a slice of Independence Day grandeur.

Now, I for one, adored Independence Day back when it came out. Especially this part:

In fact, I remember 12 year old me standing in a ridiculously long line with Papa Shameless waiting to watch in this thing on opening day on July 4, 1995.

So good. I mean, how can anyone not love the Presidential pep speech delivered so gloriously by a 1990’s Bill Pullman?

Le sigh…if only Thomas J. Whitmore and his airfield PA could be our president for real.

Wait, you say, it says this book is by Hettie Ivers, not Anna Zaires.

I guess Anna Zaires gathered some of her favorite authors and authorial buddies, gave them the go-ahead to write some novellas which take place in her creatively owned alien universe and dubbed said collection The Krinar World.

Well, this is one of those novels.

And not only does this story act as one of those novels, it is actually the continuation of one of Zaires’ short stories, The X-Club.

And I really enjoyed it.

Focusing more on the smut side of things and less on the world-building side, this book was a pure pleasure read and so much fun.

I really enjoyed Ivers’ writing and I will definitely be checking out more of her stuff – especially since it appears she writes one of my favorite genres: PNR smut.

As long as they aren’t expecting any further development or plot growth in the overarching Krinar universe, fans of the series will really enjoy this one.

People who haven’t read the Krinar Chronicles might still enjoy these novellas, although I would definitely recommend reading them first to enrich the experience.

All that said, again, I really enjoyed this one and look forward to more from this author.
I also feel like re-reading the Krinar books again, which I think I will go do now…