This is a novella. To enjoy and understand this title you will have read Empathy and Desolate. This title comes with a warning please read and heed it. 18 only.

When two dark souls connect the draw is too dominant to ignore and the obsession of owning the only color to brighten my dark world too unrelenting to not obey. I left her alone so she could live a normal life but I was weak, how can she live a normal life after so much sinister chaos invaded her world, summoning her own darkness to the surface?

The depraved devil that is me now had an anchor, someone to venture into the black abyss with.

Normal wasn’t a path ever set for Cereus.

She was her Father’s daughter but my soul mate, even if I disputed ever owning one.

She was struggling with out me in her life, the vacant ache inside her leaking out. I can’t not go to her, the need is too strong and like with all of my urges I embrace it. 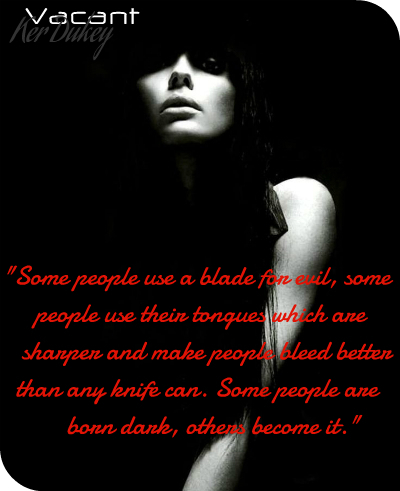 “Even the tamer man holds a devil inside him, whispering and praying life will push the saint into a sinner.”

The story starts with Cereus who’s away at college. She feels lonely and disconnected from the world knowing Ryan could still be alive. She’s suffocating under the weight of her own battle with who she is.

“Ryan turned the lights out and taught me to see in the darkness. Nobody sees me the way he does and I’m hopelessly pursuing the hunter in him. I want to be found or preyed on; if that’s what I am, his prey.”

She knows she means something to Ryan, she knows they had a connection and she doesn’t know how she feels for him. She doesn’t care what he did in the past, he loves him even if she knows he’s a monster. She starts to have some dark thoughts about hurting some girl who tries to make her life miserable.

Ryan misses Cereus and it’s more and more difficult for him to stay away. Cereus is the only one who accepts him, the REAL him, a monster, a psychopath, a killer. She manages to give him what others didn’t, something other than the craving for death and blood. When Cereus gets in trouble Ryan is the first who’s there for her, trying to protect her from others and from herself.

“Everything in life is temporary, Cereus. Everything but us. I will always come for you.”

Like the previous books in the series this was dark, twisted and I really enjoyed every minute of it! I really wish it was longer. The story is fast paced and the plot twists interesting. Ryan is a killer, a psycho, a sadistic motherf@cker but I I have to say that he is an gripping character. He doesn’t care about anything, he is who he is. His soft side is interesting to read about and Cereus’s dark side was intriguing. I really wanted to know more about Cereus and about how she grows into who she’s always been.

Overall, a great read and great addition to the series!