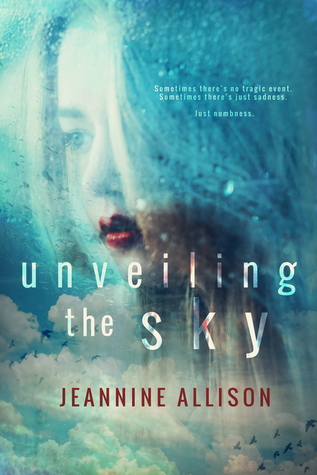 When Alara’s depression reaches its pinnacle she’s left feeling broken, vulnerable, and more than a little uneasy about moving forward. And although she’s made it to the other side she discovers that the hardest battle may simply be moving on and accepting the hardship she’s been given. Because by all accounts she should be happy, but she isn’t and she still can’t understand why. So she’s moving forward, but with the weight of her guilt and the constant fear of another episode, is she really living? Or has the fear of another episode become just as crippling as the episode itself?

Then she meets Gabriel, a grieving soul struggling to get past his mother’s death and figure out his future. As he reconciles his past and begins planning his future, it becomes clear that he wants Alara in it. He wants the sarcastic, fearful girl that always seems just a little bit out of reach. But will the girl who’s never been able to see a future give him a chance? And when he discovers her darkness, will he still love her through it?

Will she let him?

Alara struggles with depression. She’s timid, doesn’t like attention, and interacting with new people is difficult for her. She just goes through the motions of life, hoping that some day it will all get easier for her.

Ever since Gabe lost his mom, his world shattered. He has returned home after leaving for months and gets a job as a bartender. His new roommate is one of Alara’s friends, and that is how he meets her.

I liked Gabe. He knew what he wanted and he went for it. He let Alara set the pace so he wouldn’t rush her, but watching him struggle at being patient was hilarious.

“Maybe I could reverse friend-zone her. I know you just want to be friends, but sorry, I’ve decided you’re my girlfriend.”

These two become friends, spend a lot of time together, open up their hearts to each other, and eventually fall in love. The journey to their HEA wasn’t an easy one, but it is definitely worth it.

Yes, this book was very emotional, but it wasn’t that way all the time. There was enough witty banter to make you smile. I loved how all the friends were extremely close to each other. They were all supporting and caring like one big happy family.

I’m not going to pretend like I know what it’s like to have depression. Because honestly, I don’t. Jeannine did a fantastic job of showing us what people with depression feel, think, and how incredibly hard it can be for them to deal with it.

Everything felt real and honest. The writing was well done, and I never skimmed even though the book was kind of long. It flowed nicely. I want to give a big thanks to the author for letting me receive a copy of this beautiful book. Can’t wait for book two, which is about Naomi—Alara’s best friend.