A sexy new romance about a small-town woman who saves the life of a mysterious man, and finds herself unexpectedly thrown into a whirlwind love affair, featuring bestselling author K. A. Tucker’s signature “well-constructed, pulse-pounding suspense” (USA TODAY).

Twenty-four-year-old truck stop waitress and single mother Catherine Wright has simple goals: to give her five-year-old daughter a happy life and to never again be the talk of the town in Balsam, Pennsylvania: population two thousand outside of tourist season.

And then one foggy night, on a lonely road back from another failed attempt at a relationship, Catherine saves a man’s life. It isn’t until after the police have arrived that Catherine realizes exactly who it is she has saved: Brett Madden, hockey icon and media darling.

Catherine has already had her fifteen minutes of fame and the last thing she wants is to have her past dragged back into the spotlight, only this time on a national stage. So she hides her identity. It works.

Note: This novel is slow burn but there is sexual content at the end. 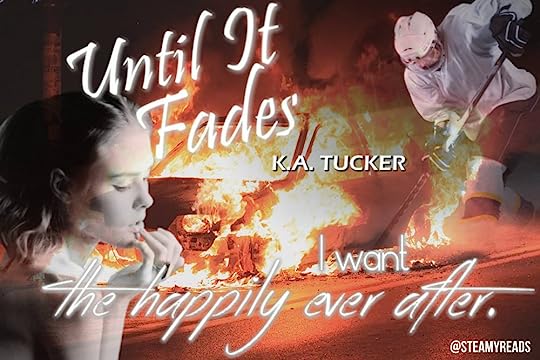 “It does feel magical. It does feel like a fairy tale. That a man like Brett – so charming, so talented, so breathtakingly handsome, so seemingly perfect in every way – would become infatuated with an ordinary woman like me.”

I have had high anticipation for this story for a while now, ever since I read the synopsis. I couldn’t wait to see what K. A. Tucker had in store for us, and I was not disappointed in the least. It was the sweet, slow-burning love story I was hoping for. It’s in those slower sections that you get to know the characters more intimately and it makes you want to travel on their journey right along-side of them.

Until it Fades centres around Catherine Wright; a young truck stop waitress and single mother with a chequered past. Catherine has had a somewhat troubled youth and as a result, is desperate to keep herself hidden from world; especially her small hometown of Balsam. Catherine is no stranger to idle gossip and indiscretions.

One fateful night, after the blind date from hell, Catherine is driving home when she comes across a horrendous car wreck on the side of the road. In an act of complete selflessness and bravery, she dives into the wreckage to save the passenger of car before it is set alight (and in the process injures herself). The person she saves from the accident was none other than Brett Madden, Philadelphia’s star hockey player. Not that Catherine knows who he is.

With her past still haunting her, she is ardent in her protection of her young daughter and family. If the past is ever dredged up, it will cause more shame and humiliation to her and the ones she loves. Catherine is determined to keep her identity hidden and remain out of the spotlight. Brett, however, is determined to find the woman who saved his life.

Once they meet, their attraction for each other is undeniable and neither of them could ignore the feelings that were starting to develop. I have to say though Brett was such a lovable hero. He’s lived in the spotlight for so long, not only as a professional athlete, but also being the offspring of Hollywood royalty, which has in turn led him to being the media’s golden boy. Much to my surprise, he never comes across as a typically arrogant or egotistical famous douche. Instead he’s thoughtful, caring and oh so sweet.

Until it Fades is a really slow-burning romance which I didn’t mind in the least, because I felt it added to the anticipation of a love story developing from friendship; a special bond and connection that was unbreakable. Catherine and Brett truly were kindred spirits.

Once they meet, their relationship turns to a beautiful friendship and Brett was literally in awe of Catherine’s bravery, selflessness and courage. He couldn’t for the life of him understand why a single mom would risk her life to save his.

Until it Fades was such a beautifully well written love story that made me feel all warm and fuzzy. If you love your romance stories to be almost fairy tale like, then definitely check this out, you are sure to fall head over heels for Catherine and Brett.