With his college graduation gown expertly pitched into the trash, Justin Akron is ready for the road trip he planned with his best friend Landry— and ready for one last summer of escape from his mother’s controlling grip. Climbing into the Winnebago his father left him, they set out across America in search of the sites his father had captured through the lens of his Nikon.

As an aspiring photographer, Justin can think of no better way to honor his father’s memory than to scatter his ashes at the sites he held sacred. And there’s no one Justin would rather share the experience with more than Landry.

But Justin knows he can’t escape forever. Eventually he’ll have to return home and join his mother’s Senate campaign. Nor can he escape the truth of who he is, and the fact that he’s in love with his out-and-proud travel companion.

Admitting what he wants could hurt his mother’s conservative political career. But with every click of his shutter and every sprinkle of ash, Justin can’t resist Landry’s pull. And when the truth comes into focus, neither is prepared for the secrets the other is hiding. 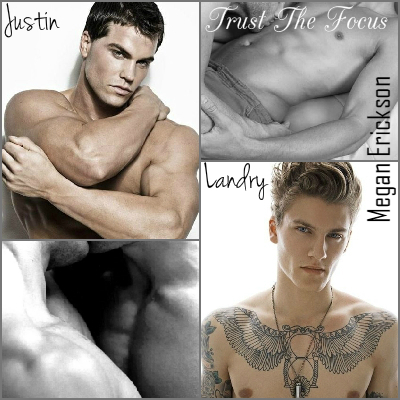 “Trust The Focus” is a sweet and romantic friends to lovers story about life, friendship, growing up and accepting who you are. I didn’t know what to expect since Megan Erickson is a new author to me and especially since this is her first m/m novel, but she really surprised me with this one. A well written story, told entirely from one of the main characters perspective, Justin, “Trust The Focus” was a great debut novel.

Justin Akron is a 22 years boy who lives a lie. He lies everyone about who he really is – that he likes boys, that he is gay. He figured out he is gay since high school and he is aware of the fact he was silent about it too long. He doesn’t want to loses his mother, a conservative woman who plans to run for Senate and he doesn’t want to hurt her conservative political campaign, so he pretends that he is straight. That doesn’t mean he never wondered about what would have happened if he took a different path. Justin’s mother not only controlled without knowing his decision to remain in the closet, but she controlled other aspects of his live as well. Justin loves photography, but to please his mother he’s now a graduate in Political Science with Photography just as a minor.

For the first time in his life Justin stands up for himself when he decides to take a road trip, a road trip that means everything to him. This road trip is not for fun, is for his father, a talented photographer who died some time ago. Justin wants to visits twelve important sites for his father’s life to spread his ashes and he plans to do this with his best friend Landry in his father’s Winnebago Brave RV Camper. Needless to say his mother was not pleased when she found out about Justin’s plans, especially since these plans involve Landry, a tattooed, pierced, gay boy. Landry had been left at a hospital as a baby. He had some serious health problems so no one wanted to adopt him. He spent most of his childhood in a group home of boys until a nice family decide to take him.

Justin and Landry know each other from 6th grade when Justin save Landry from some bullies. They were friends since then so they know each other very well. But they don’t know everything about each other. Justin never told Landry that he is gay and he never told him he likes him more than a friend. Landry has his own secrets and one of them is the fact that he’s in love with his best friend since forever. Time passes, the two guys fallow the plan visiting different sites, they grow closer to each other as friends, but everything changes when Justin is forced by certain circumstances to admit to Landry that he is gay.

“I’m like you,” I repeated.(…)
“You’re like me how? What are you talking about?”(…)
Fuck. Fucking fuck. I’d never said it out loud. I’m not even sure I ever said the words in my head. But I needed to. I was a twenty-two-year-old man. Time to act like one. Own up.
I took a deep breath, and I willed that roller coaster over the crest. “I’m gay.”

It goes without saying everything gets complicated. They start to communicate, they are honest with each other and eventually get involved in a relationship. But none of them forgets Justin will start working for his mom’s political campaign in a couple of months and that she doesn’t know the truth about who Justin really is.

Will Justin allow his mother to dictate him how to life his life or he will grew up and really stand for himself, for who he is and for what he wants?

“This was us. Landry and me. Together in a way I’d dreamed about more times than I could imagine. It was more than just the feeling of being inside him, it was the feeling that being with him, this way, was right. His head thrown back. His legs and stomach quivering with effort. His lips red and shiny. We were always meant to do this. This had always meant to be us.”

I really enjoyed this one! Despite the premise, the angst and drama are low and I must say the plot was pretty solid and well done. Overall I liked the two main characters, even if at times I wanted to punch them in the face. They were a little immature at times, but let’s not forget they are 22 years old, so they are young and inexperienced in many ways. Both of them are characterized well enough in a very realistic way, which I really enjoyed.

I really felt for Justin. Even if he knows who he is and he accepts it, he’s scarred to admit it to his mother and to his friends. He’s not only scarred, he’s angry as well. Angry at himself because he knows he is a coward. And I like the fact he admits that. At least he knows who and what he is.

Landry is a great guy. He is there for Justin when he needs someone, he’s supportive as much as he can be, because he is impatient as hell at times. He really pissed me off one time or two with his impatience, but overall like I said he was great. He is fun and carefree and he’s a great friend. I totally understood why be can be with someone who’s in the closet and I like the fact he shows maturity when he doesn’t judge Justin for his anger.

I loved ‘the note’ – very sweet and emotional and Justin’s coming out and I also enjoyed Landry’s blog and his funny posts.

Like I mentioned above, the angst and drama are pretty low, but some drama in the end felt a little OTT. It didn’t bothered me too much, but I can’t say I understood its purpose. Also, the plot was very convenient at times. Needless to say the story felt a little rushed.
There are some interesting twists, but overall the story was a little predictable. I didn’t care too much about this aspect because the story was enjoyable and I liked how it progressed.

All in all, “Trust The Focus” was a great friends to lovers story with likeable characters, enjoyable storyline and great writing.