When he left for a twelve-month deployment, she knew it would feel like forever before they saw each other again. She didn’t realize how right she was.

When Lance Corporal Brecken Connolly gets taken as a POW, Camryn hopes for the best but steels herself for the worst. In the end, steel was what she needed to survive when he didn’t. She moves on the only way she knows how—gilding herself in more steel.

Years go by.
She builds a new life.
She leaves the old one behind.

Until one day, she sees the face of a ghost on the news. Brecken seems to have risen from the dead, but she knows she can’t perform the same miracle for herself. While Brecken was held in a torture camp for the past five years, she’s been trapped in her own kind of prison. One she can't be saved from.

The man she mourned comes back to join the living, but the girl he wanted to spend his life with isn’t the same woman he comes back for. Brecken isn’t the same person either. The past five years have changed them both. While he’s determined to put the pieces back together, she’s resolved to let hers rot where they shattered.

Broken or not, Brecken wants her back. He’ll do anything to achieve that. Even if it means going against the warden of Camryn’s personal prison—her husband. 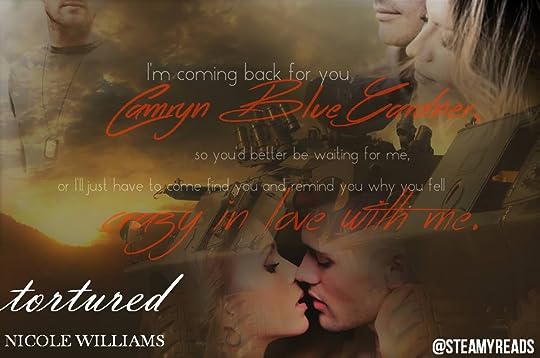 What can I possibly say about ‘Tortured’? Well, I can say a hell of a lot about how much I loved and gushed over this story.

From the moment I had read the synopsis of ‘Tortured’ I just knew I had to get my hands on this story ASAP. I love nothing more than a tortured hero and to then throw in that he is a military hero as well, I knew I was completely done for. Camryn and Brecken’s story was heart-breaking, intense, emotional and passionate. I became completely addicted to this gritty and raw story of torture from the very first page and just could not get enough until the very last.

Camryn and Brecken are childhood sweethearts who have grown up together and their love for each other was the ‘forever kind’, nothing was going to tear them apart. When Camryn is in her final year of high school, Brecken leaves to go on deployment to Iraq for twelve months. He joined the marines as a way to make a better life for Camryn and himself. He leaves her with the promise to return for her in a year so they can get married and start their life together.

“Our scars prove we’re strong. They testify to what we can endure. It’s not weakness carved into them – it’s strength.”

Even though Brecken knew what he was doing was the right thing to do, in order to secure a future for both himself and Camryn, it completely gutted him to leave her behind knowing he wasn’t going to be there to protect her.

There was no doubt in Camryn’s mind that she wouldn’t wait for him, he was the love of her life and even though it was only one year, to her it felt like a life-time. Nothing could prepare her for what was to happen next. Her whole life came crashing down as she witnessed the one thing in the world that she feared the most; Brecken, her life, her forever, was captured live on TV and murdered right before her very eyes.

Fast forward six years and Camryn has moved on the only way she knows how. She’s no longer the girl she once was and as a result has had to make some tough decisions. Her life once again comes to a standing halt when she comes face to face with the ghost from her past.

“To be a hero, you need to do something heroic. All I did was survive.”

Brecken… OMG… he utterly and completely broke my heart. Everything he had to endure over the past six years was absolutely gut-wrenching. He was captured and taken as a prisoner of war (POW) while on deployment in Iraq. He’s returned home for his girl and has been dubbed the country’s hero, a title he is not totally comfortable with. But I have to say with everything he has been through he is definitely worthy of such a title. I loved this character; I mean what is there not to love about him? He’s a war hero, he’s oh so sweet with an absolute heart of gold who will do anything to protect those he loves and is quite possibly the most understanding and patient person in the world.

“I never asked to be the world’s hero. All I ever wanted was to be yours.”

I absolutely adored this gut-wrenching story of love lost and found. A story of two tortured and broken souls and their struggles to overcome the hell and prison they have had to endure. If you have not read this outstanding story as yet, do yourself a favour, because even though it was not at times an easy read, it was well worth the ride.

Nicole Williams is the New York Times and USATODAY bestselling author of contemporary and young adult romance, including the Crash and Lost & Found series. Her books have been published by HarperTeen and Simon & Schuster in both domestic and foreign markets, while she continues to self-publish additional titles. She is working on a new YA series with Crown Books (a division of Random House) as well. She loves romance, from the sweet to the steamy, and writes stories about characters in search of their happily even after. She grew up surrounded by books and plans on writing until the day she dies, even if it’s just for her own personal enjoyment. She still buys paperbacks because she’s all nostalgic like that, but her kindle never goes neglected for too long. When not writing, she spends her time with her husband and daughter, and whatever time’s left over she’s forced to fit too many hobbies into too little time.