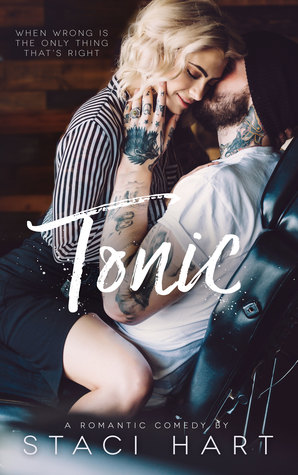 Not his relationships, which have been few and far between since his brutal divorce. Not the drama of working in a tattoo parlor, which seems to be around every corner. When things get him down, he smiles and cracks a joke. But he’s not the kind of man you cross, or you’ll find yourself at the wrong end of his fists.

Like her job as a reality television producer, given that she typically has something to prove. Or her love life, which is defined by a series of requirements — affluent, ambitious, accomplished, to name a few. Definitely her family, who worked their whole lives to afford her every opportunity, a sacrifice she doesn’t take lightly. When she’s tapped to produce a reality show at Joel’s shop, she doesn’t think twice, just goes in for the kill, as if there were any other way.

The second Annika walks into Joel’s shop, he makes it his mission to crack her open, but she’s not having it. He’s all wrong — too crass, too hairy, too un-serious. But it doesn’t take her long to find out there’s more to him than smirks and tattoos. And what she finds could put her career and his heart on the line.

Not that Joel cares. Because for the first time in a long time, he’s found his tonic.

“Ink and milk. Black and white. Her and me.”

Annika Belousov is an executive producer and is going to be running the new reality tv show at Tonic. Tonic is a tattoo parlor owned by Joel Anderson and his brother, Shepard. The moment they meet, Joel is infatuated. He sees past Annika’s cold demeanor and wants to be the one that breaks down her walls.

“She was all eyes and lips and a story I wanted to know. I needed to know.”

Annika hides her true self behind a mask. Her job has made her the way she is. Being attracted to Joel isn’t something she anticipated, especially since he’s all beard and tattoos—not the type of guy she normally goes for. But Joel can be persistent, and what Joel wants, Joel gets.

Inevitably Annika’s resolve starts to break, and soon she’s letting Joel into her life… and into her heart. But what will happen when she has to choose between her job or the guy?

“Transparent, translucent, like the ice that I was. Freezing him out would never work, not when he could see the fire in my heart.”

I enjoyed the banter and push and pull in the beginning. Both Annika and Joel have a great supportive family, giving them advice when it’s most needed. When these two finally give in to their attraction for each other, things get pretty smokin’ hot.

This is a sweet romance that is pretty low on angst and drama. There’s enough humor that will put a smile on your face and a great cast of supporting characters that you will love. Tonic isn’t one you want to miss. Also, look at that cover! It’s pretty! Make sure to add it.

“What?” I blustered, caught off guard.

“Stand up and turn around. I want to see it.” I was too surprised and caught up in the moment to refuse, so I stood and turned, laying my palms on the armrests as I faced the back of the chair.

One hand rested on my hip.

My heart stopped as I wondered what the hell I’d gotten myself into.

I glanced over my shoulder, my gaze bouncing between his face —turned down too much to read —and his reflection in the speckled, antique mirror, which I couldn’t see much of either. His free hand moved to the waistband of my tailored pants, and his fingers hooked and tugged, pulling the band down low.

His thumb ran over where I knew the tattoo was, and I felt his breath. Every place where we connected spoke to me of ownership.

“You got this done here? In New York?” His voice was rough.

Mine wasn’t much better. “Yeah. In Brooklyn.”

“Let me cover it up for you. Give you something you’re proud of. Your skin …” He paused, and I wished I could see his face, read his mind. “This shouldn’t be here, not on you. Let me … I want to …” He had moved closer, his hand on my hip pulling me back into him slightly enough for me to not have noticed that the backs of my thighs were touching his, my back arched just enough, his breath hot.

And then, he disappeared. I stood, finding my hands were trembling, wondering where I was and how I’d gotten there. The shop was mostly empty —no one had seen, not that it would have looked like much from the outside. But from where I stood, I felt every single deliberate move like a telegraph, telling me exactly what he wanted to do without him having to finish the sentence.

His back was to me when I turned around, his face down —I couldn’t see it in the mirror over his cabinet of ink and needles as he dug around in the drawers, seemingly for nothing in particular.

“Let me know if you want me to draw something up.”

“Okay, I will.” I paused, not knowing what else to say, feeling like I should say something. But there was nothing that I could say. “Well, have a good night, Joel. I’ll see you tomorrow.”

He nodded, glancing at me in the mirror. “See you, Annika.”

I tried not to bolt out of the shop, but once outside, I admit it —I took off. I hauled up the stairs and into the office to grab my bag, grateful that Laney was already gone, and I texted my driver, asking him to pick me up a few blocks away so I could walk, put some distance between me and Joel, get the energy out of my body, through my legs and feet, into the pavement.

Staci has been a lot of things up to this point in her life — a graphic designer, an entrepreneur, a seamstress, a clothing and handbag designer, a waitress. Can’t forget that. She’s also been a mom, with three little girls who are sure to grow up to break a number of hearts. She’s been a wife, though she’s certainly not the cleanest, or the best cook. She’s also super, duper fun at a party, especially if she’s been drinking whiskey.

From roots in Houston to a seven year stint in Southern California, Staci and her family ended up settling somewhere in between and equally north, in Denver. They are new enough that snow is still magical. When she’s not writing, she’s reading, sleeping, gaming, or designing graphics.