My life had a plan. Until he invaded it and stole it all away. My captor took me and I became a pawn.

His strategy changed and he sent me away to WAR, because money is everything in this world.

In my WAR, though, I found peace.

I couldn’t help but find love where I least expected it, with a man who lived a battle every day of his life
…all inside his head.

But then my captor came back for me.
Yet, this time, battle lines had been drawn and I was protected.

So we thought.
Even though my WAR was raging,
my captor would fight to the death.

All’s fair in love and WAR, right?
Not this time.

***WARNING***
This is War, Baby is a dark romance. A really dark one. So dark you’re going to wish you had a flashlight to see yourself to the end and someone to hold your hand. Human trafficking, dubious consent, and strong sexual themes that could trigger emotional distress are found in this story. This story is NOT for everyone. 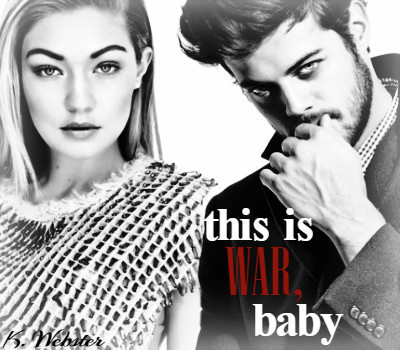 Wowza…what an intriguing, consuming book! Oh my…this author surprised me in such a good way. “This is War, Baby” was in a way…like any another dark book I’ve read before. Not only for the fact that it’s starts with a bang, and dayum what bang, but it left me with my mouth hanging open so many f@cking times. Once I’ve read the prologue I knew I will love this book and I knew it will be as captivating as its title. And trust me it was! I couldn’t put it down! It was dark, twisted even disturbing at times, but it also was sweet and sexy.

“Sometimes, sweetheart, you have to make sacrifices. You, doll, are a sacrifice. Your part is small, but it is so significant.”

Our heroine, Baylee is a seventeen year old high school student whose life is changed irrevocably when she is kidnapped in her own home. Her kidnapper is a man she has known for years, a man she trusted and secretly lusted over. He wants her for himself, but he wants money more. This man has ‘big plans’ for Baylee. He will train her for two weeks than he will sell her to the highest bidder.

“I like ‘em dirty. And you’re as dirty as they come. Soon, you’ll be just as dirty on the inside,” he murmurs against the shell of my ear, sending goosebumps over my flesh. “You’ll like it too. In fact, you’ll love it. One day you will thank me.”

Baylee knows everything could change for her, but she can’t do nothing about but accept her new life. She is bought by a mysterious 28 years old man, War. Her new captor is rich, gorgeous, but so tortured. His fears and obsessions shock Baylee, but soon she realizes that he’s nothing like her first captor.

“She is to be my reprieve from the darkness that ebbs and flows inside me—always threatening to swallow me up.” 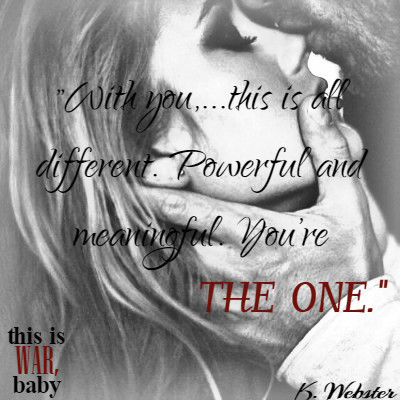 I loved every single thing about this book. The writing was captivating, the storyline exciting and all three main characters were complex and so well developed. This story was pure and simple refreshing and so addictive. If you enjoy them dark and twisted, then “This is War, Baby” is the book for you. The story has many twist and turns that for sure will keep you at the edge of your seat, but also some scenes that will offend you for sure, leave you disturbed and make you cringe.

All three characters were interesting, well developed and complex. Baylee was a great heroine. She is strong, smart, wise beyond her years and also thoughtful, caring and patient. Baylee’s first captor was such a sick f@ck…ugh…but the author did a great job portraying his character.

“Your light is already seeping into the dark parts of my soul and I’m not about to let that slip away for a second. (…)I know I can’t live without that light.”

One of my favorite aspect of the story was War. War was…something else. He was like nothing I had expected and honestly like any captor I’ve read before. He was an endearing character from the very beginning, not only because he’s not a sadistic mouthf@cker, but because of his personality. I’m pretty sure War will win you over from the moment you’ll meet him.

His past and his….condition broke my heart. Poor War! He was portrayed in such a realistic way. I loved the fact he was so…different and I absolutely loved his POV. The way he feels for Baylee was sweeeeet, heartwarming and I totally loved them together. Baylee really was the perfect match for War.

The story ends with a huge cliffhanger. OMG…and I’m dying to read the next book!

Overall, this was a very thrilling read, really well written and I highly recommend to anyone who loves dark and twisted tales. 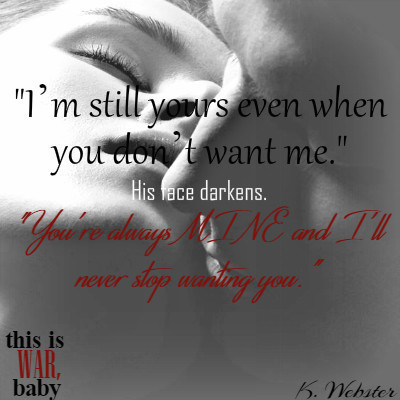