“She healed me. She broke me. I set her free. But we are in this together. We will end this together. The rules of this ancient game can’t be broken.”

Nila Weaver no longer recognises herself. She’s left her lover, her courage, and her promise. Two debts down. Too many to go.

Jethro Hawk no longer recognises himself. He’s embraced what he always ran from, and now faces punishment far greater than he feared.

The Third Debt will be the ultimate test... 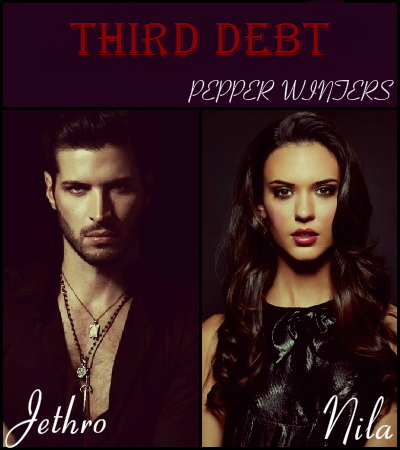 I have to be honest here…I was scared shitless to start din fourth book in the series. And, no, not because the previous book ends with a huge cliffhanger. Actually every book in this series (so far) ended with a cliffhanger so, no. But because I knew something colossal will happen in this installment, something that will change everything. I just felt it! And I was so fucking right! Anyway..this installment is hands down the best (so far) in the series. At least for me. “Third Debt” is the reason why I loved dark reads. The intensity, the twists and turns, all the dark elements are fantastically done in this book and even if some of them almost gave me an anxiety attack I loved them. Needless to say, this book left me wanting more. Yeah, what can I say? I’m a masochist!

Like I mentioned above, this installment was intense. Was so intense that I was at the edge of my seat so many times and I know for sure, like me, you will not be able to put it down for one minute. It was gripping from the first word to the last. “Third Debt” is the fourth book in the series and picks up where the previous book, “Second Debt” ended.

“Nila had my heart, but my father had my very existence.” 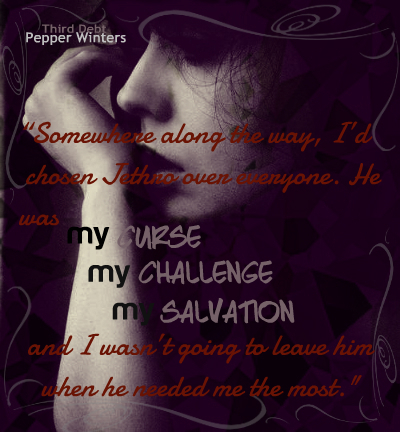 The previous book in the series ends with Nila being free, not by the Hawks, but by someone else. Nila knows she supposed to be happy, because now she’s a free woman, but she’s not. She can’t find her place in the world with his father and her twin brother. All she can think about is what she had left behind, the man she loves, Jethro Hawk. All she wants is to go back, to save him – from his nightmares, from his family and from himself. She feels ruined, destroyed and empty. All he wants and needs is Jethro Hawk, even if she is a Weaver. 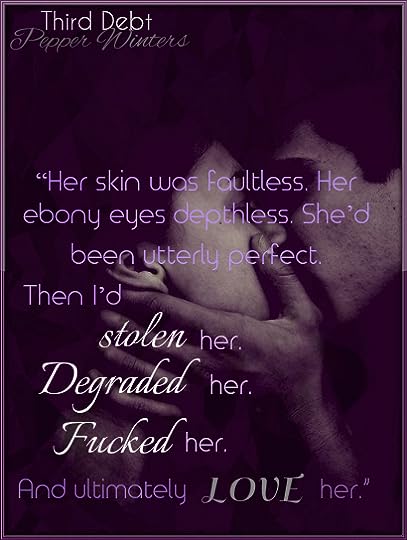 When Nila returns she realizes that Jethro is changed, that he’s another man. He’s cold and lifeless and with each and every day he becomes his father, Cut.

“I’ll break you again, Jethro Hawk. I did it once. I can do it a second time.
And then I’ll save both of us.”

No matter how hard Jethro tries to stay away from Nila, he can’t and Nila knows it. She knows he belongs to her as much she belongs to him. As the story progresses Jethro tries hard to fight his feelings for “the little Weaver” and their attraction, but he eventually realizes he tries in vain.

“We were both destroyed. And the only cure was to give in.”

“Look at me.”
“I’m looking, Jethro. And despite everything you do…I see you.”

I have to admit this book messed up with my head and left me speechless. Like I mentioned before the story it was so captivating and held my attention for several hours like no other. I didn’t have time to get bored for one minute. First and foremost I have to say this installment like the others installments in the series ends with a cliffhanger, a huge cliffhanger, the worst cliffhanger ever. Needless to say I would do anything to have the next book in the series. Like NOW! I rarely get impatient when I read a series and one of the installments ends with a cliffhanger, but this time Mrs. Winters fuck-up with my head.

I really liked how the story progressed. I know it was a little slow at the beginning, but for me it really worked because I had enough time to remember what happened in the previous books in the series. That doesn’t mean I forgot what happened in the last book/s. No! I’m talking about all the small details that counts and make the story interesting and unique.

In this installment we find out more about Jethro’s “condition”. I would have never guessed about this mysterious condition. Never! Not in a million years! It was my first time reading about something like this, so I found it very interesting and original. I love when an author surprised me in a good way, especially when we’re talking about a series, because let’s face it, it’s hard for a continues series to bring an interesting aspect or an interesting twist to hold the reader’s attention.

Like the previous books in the series I really liked Nila and Jethro. With every installment we get to know better these two remarkable main characters. They are different from other characters I read about, (and I’m not talking only about characters in dark romances), they are three-dimensional, so they very well developed. If you thought you knew Jethro, think again because in this installment you will meet the ‘real’ Jethro Hawk. And I loved ‘real’ Jethro. I really felt for him and even if he was a little annoying, to say the least, he didn’t manage to piss me off. We all remember how naïve Nila was in the first book in the series. Right? Right..If in the previous book she wanted revenge no matter what in this book like I mentioned before, all she wants is to save Jethro and to fight for them to be together. Nila here is as strong as in book2. I loved her determination and the fact she’s ready to stand up for herself and for what she wants.

“[they] forced me to do this. But I would do it my way. I hadn’t broken any of Cut’s rules. I’d played along. I’d painted a picture for the world to eat up.
I’d just been smarter than they gave me credit for.” 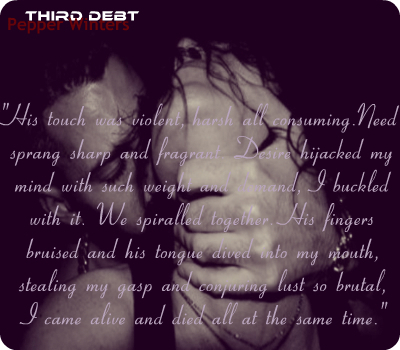 Once again the chemistry and the connection between Nila and Jethro are palpable and very well done. The same thing I can say about sexual tension between them. Fantastically done!

All the side characters like the main ones are interesting in their own way, but the one who stand out for me was Kes. I always knew he was one of the good guys and he proved that in this installment. I’m dying to know how the story will progress so I’m dying to read the nest installment!Can’t fucking wait!

“Nothing is ever black and white, Nila. You should know that by now. It’s all how you survive the grey.”