The last time I saw my best friend’s younger brother, he was a geek wearing braces. But when Cannon shows up to crash in my spare room, I get a swift reality check.

Now twenty-four, he’s broad shouldered and masculine, and so sinfully sexy, I want to climb him like the jungle gyms we used to enjoy. At six-foot-something with lean muscles hiding under his T-shirt, a deep sexy voice, and full lips that pull into a smirk when he studies me, he’s pure temptation.

Fresh out of a messy breakup, he doesn’t want any entanglements. But I can resist, right?

I’m holding strong until the third night of our new arrangement when we get drunk and he confesses his biggest secret of all: he’s cursed when it comes to sex. Apparently he’s a god in bed, and women instantly fall in love with him.

I’m calling bullshit. In fact, I’m going to prove him wrong, and if I rack up a few much-needed orgasms in the process, all the better.

There’s no way I’m going to fall in love with Cannon. But once we start…I realize betting against him may have been the biggest mistake of my life.

THE ROOM MATE is a full-length standalone romance.

“Love makes you do crazy, irrational things. And yet, even knowing where we’d end up, I doubted I would have had the strength to stop myself from falling for him.” 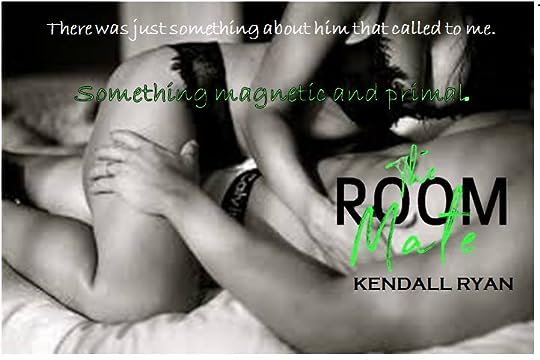 If you are looking for your next fun-filled, sexy book that will make you swoon, then look no further than “The Room Mate” by Kendall Ryan. It was such an entertaining story it had me glued to the pages from start to finish. One thing in particular I loved about this read was the amazing storytelling of Kendall Ryan; the plot was compelling as was the dialogue, it was not just about fun and sexy scenes. Don’t get me wrong I love books with plenty of hot and steamy scenes in them, but I also enjoy a thrilling story to keep me engaged with the storyline and characters; this book certainly delivered.

Paige and Cannon have been friends since childhood. Paige has only ever seen Cannon as just a friend, nothing more. Cannon is the geeky younger brother of Paige’s best friend however he has always been in love with Paige. Paige was always the centre of all his teenage fantasies.

Cannon needs a place to live after being evicted from his home and his sister Allie organises for him to move in with her best friend Paige for the next few months. Nothing could have prepared Paige for what she feels when she answers the door and sees Cannon standing in front of her. He is nothing like what she remembered.

“Just the act of standing near him made my mind wander to things like sheet-clawing sex, the smell of latex, and regrets the morning after. My best friend’s little brother wasn’t so little anymore. And he’d just marched into my life, turning my girly bits into warm, aroused mush.”

I absolutely loved and adored Cannon. I have most definitely found my new book BF. He’s a hot, sexy, dirty talking soon to be doctor with an absolute heart of gold. I mean this when I say it, there is nothing not to love about him. Everything he has achieved in his short life so far has all been for the sake of his sister and Mom. There is nothing he would not do for his family and feels it’s his responsibility to take care of those he loves.

Paige tries to resist Cannon’s charms and sexiness, but living under the same roof it becomes increasingly hard for her. She tries to do the right thing by keeping things platonic between them. She knows Allie would not approve of their relationship and she doesn’t want to ruin her lifelong friendship with Allie or cause strain on Cannon and Allie’s relationship. The more time Paige spends with Cannon, the more she develops intense feelings for him that ultimately she cannot ignore.

“In that moment, he was the realest, best, brightest thing in my world, and I hated that we would never be more.”

Kendall Ryan has delivered a smart, sexy and fun romance with “The Room Mate”. This book captured my interest from the very first page. This story is about family, friendship, love and finding it when you least expect it. I would most definitely recommend this read to anyone how loves their angsty friends-to-lovers stories mixed in with hot steamy scenes where you can’t help but fan yourself. You simply can’t get enough of these loveable, inspiring characters. 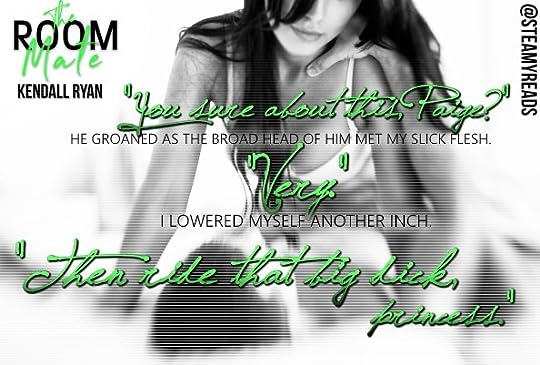 ➦This was the third roommates trope novel I’ve read this month and it was my favorite. It was just so deliciously steamy at times and I’m very glad I picked it up… even if it was only because of the cover.

➦If your mother of a hen best friend ever asked you to let her “little” brother crash at your place for a couple of months, what would you say? I’d be like

➦I suspect my answer would be a nonchalant “sure, whatever…” but I would still be thinking along the lines of “fuck THAT” just in a more… literal sense…? 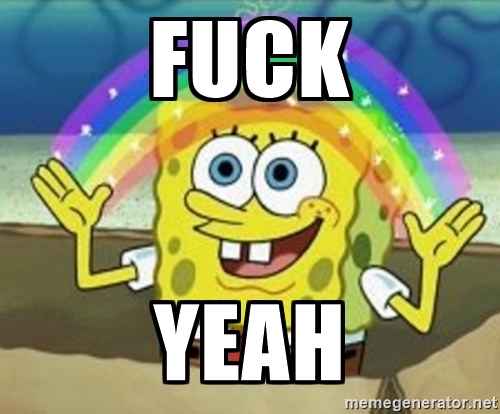 ➦I would have to make sure to stay away from him, though… because he is moving away in two months to start his residency in a different state. Did I mention he’s gonna be a doctor? o.o So yeah, best to stay away and not walk in on any funny business he might or might not be engaging in…

➦But what if he also told you he was “cursed” and after he sleeps with a woman she falls head over heels in love with him? I’d try to prove him wrong, of course!

➦Yeah, good luck to me. 🙂 Or, in this case, to our heroine here. If you like roommate and best friend’s little brother/sister tropes do give this one a chance. I loved the plot and the naughty times and I plowed through the book pretty fast and was never bored.

Shit, even his voice was hot, deep and smooth and rich.

I squinted at him, my mouth opening, then closing without a sound. Recognition clawed at the edges of my brain. “C-Cannon?” My voice was breathless and thick.

His mouth pulled into a happy smirk, and he held out a hand. “God, it’s been years.”

“At least five,” I agreed, placing my palm against his. His hand was warm and solid and the touch of his skin sent tingles rushing through me. My nipples hardened into points beneath my bra and my ovaries did a little happy dance. It’d been months since I had a man in my apartment, and my entire body was primed and ready.

“You look well,” he said, still smirking at me. And still clasping my hand.

“You’ve grown up,” was all I managed. Holy hell, had he ever.
...continue reading

He’d gone away to college at Yale, where he’d finished early, then moved to Pennsylvania for med school. He’d transferred to Michigan at some point last year, though I wasn’t clear on why. Allie occasionally gave me updates about his life, but he and I had never really been close. He was her kid brother; I had no reason to know the intimate details about him. But standing before him now, at the threshold of my small home, something felt very intimate about this moment.

“So have you.” His eyes traced down the length of me, pausing briefly at my breasts—which had never felt more achy and full. I suppressed a flash of disappointment when he finally dropped his hand from mine.

The fuck… This was Cannon. And here he was staring at my breasts. My brain struggled to catch up to what was happening.

He might be young, twenty-four years to my twenty-eight, but his eyes spoke of wisdom and maturity. This new Cannon was civilized and sharp-witted. Cultured and dashingly handsome. I couldn’t quite put my finger on what had changed, though his physical presence was a large part of it.

Just standing near him made my heart pick up its pace. My fingertips tingled with the desire to reach out and touch him. Seriously, what the hell was happening to me? This was Cannon freaking Roth. Soon to be Doctor Cannon Roth. That had a yummy ring to it.

Shaking my head against the rush of desire to play doctor with him, I scolded myself. He was Allie’s brother. Which meant he was practically family. And Allie would kick my ass if anything happened between us. She’d always been a mother hen, and although she was fiercely overprotective of everyone she cared about, her precious baby brother got the brunt of it.

“I know you spoke with Allie, but I wanted to come by myself and sure you were comfortable with this.”

Just the act of standing near him made my mind wander to things like sheet-clawing sex, the smell of latex, and regrets the morning after.

And he’d just marched into my life, turning my girly bits into warm, aroused mush.