The Queen and the Cure
The Bird and the Sword Chronicles #2
Amy Harmon
Fiction, Fantasy Romance
May 2017

"There will be a battle, and you will need to protect your heart."

Kjell of Jeru had always known who he was. He'd never envied his brother or wanted to be king. He was the bastard son of the late King Zoltev and a servant girl, and the ignominy of his birth had never bothered him.

But there is more to a man than his parentage. More to a man than his blade, his size, or his skills, and all that Kjell once knew has shifted and changed. He is no longer simply Kjell of Jeru, a warrior defending the crown. Now he is a healer, one of the Gifted, and a man completely at odds with his power.

Called upon to rid the country of the last vestiges of the Volgar, Kjell stumbles upon a woman who has troubling glimpses of the future and no memory of the past. Armed with his unwanted gift and haunted by regret, Kjell becomes a reluctant savior, beset by old enemies and new expectations. With the woman by his side, Kjell embarks upon a journey where the greatest test may be finding the man she believes him to be. 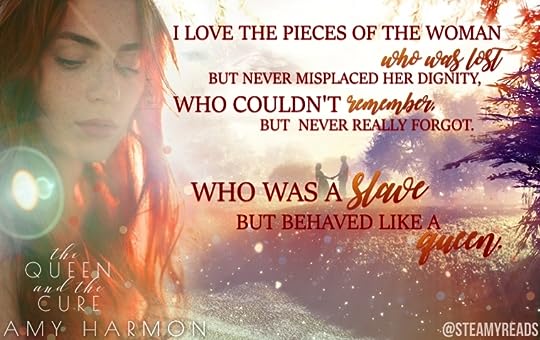 ➦Amy Harmon always manages to hypnotize me with her writing! Being a big fan of fantasy romance I can’t express how happy I am to have discovered this series. It was amazing to be submerged in this magical world if only for a couple of hours. But I felt like I was living in it and my hands are itching for more stories!

➦Kjell is a warrior and a brother of the king. He protects the lands and travels with his men in hopes of killing off the rest of the Valg – the beastly flying creatures preying on all things living.

➦Not only is Kjell a warrior, but also a healer. His gift is put to work one night when he stumbles upon a woman who fell off a cliff. By some miracle he manages to heal her and returns her to her village, where she has been a slave. But when he tries to leave, she follows.

“I will stay with you.”
“You will not.”
She didn’t protest further, but he felt her resistance, and he quietly reveled in it.

➦And so begins their journey. I loved the times they were on the road, encountering all kinds of obstacles in forms of different creatures. Absolutely fantastic. And while I might not completely fall in love with the heroes in Amy Harmon’s stories, her imaginative writing always sucks me in with its unpredictability. The story is revolved around romance but doesn’t lack in the the action – some awesome battles commenced and left this reader very happy. Definitely recommend!