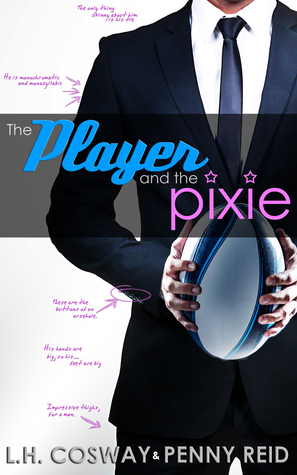 How can someone so smokin’ hot be so bad in bed? I mean, Sean Cassidy is absolute rubbish. RUBBISH. He is the epitome of walking, talking false advertising and I want a refund! Plus he’s an arsehole. So… what is wrong with me that I can’t stop thinking about him?

THE PIXIE
Lucy Fitzpatrick doesn’t like rugby.
As the little sister of Ireland’s most infamous rugby player, Lucy can’t seem to escape the championship-sized shadow cast by her big brother, or her mother’s frequent attempts to micromanage her future. Her rainbow hair is as free-spirited as her quest for inner peace, yet overbearing expectations keep bringing her down. And when she’s down, her compulsive little problem lands her in seriously big trouble.

THE PLAYER
Sean Cassidy is a cold-hearted brute… or so he’s been told. Frequently. By everyone.
His blonde locks, baby blues, and rock hard bod make ladies the world over drool with desire. As the rugby world’s second most infamous player, he should be basking in his success. But Sean has never been content settling for second place, and his frequent confrontations with Lucy’s big brother leave him cold. And when he’s cold, his compulsive little problem lands him in the lap of Lucy Fitzpatrick.

THE PLAN
Sean has a problem only Lucy can solve. Lucy has a problem only Sean can fix. The solution seems obvious: you scratch my back, and I’ll bail you out of jail. But when their business arrangement unexpectedly leaves Sean scorching hot and Lucy on the precipice of inner peace, can they convince the world—and Lucy’s big brother in particular—that this is the real deal?

Either way, both the Player and the Pixie are about to teach each other some pretty monumental lessons about family, life, but most importantly, love. 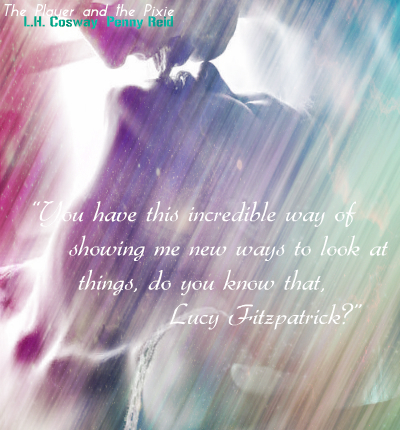 After reading ‘The Hooker and the Hermit’, the first book in this rugby series I was anxiously waiting to read this second one since I’m a big fan of these two authors. I love these two authors individually, but together they are simply fantastic. Once again these two ladies delivered an enjoyable read, written very well, a great blend of sweetness and sexiness with a big pinch of sassiness.

“It was abhorrent, I knew that, and I struggled daily with my guilt. In fact, I’d been doing so well in my attempts to quit. To be a better person.”

This second book in the series fallows the story of Lucy, Ronan’s sister (the hero from the previous book in this series). Lucy works for Annie, her future sister-in-law being a celebrity blogger/photographer. She moved in New York six months ago not only to do that for a living or to be close to her brother, but also because she wanted, needed a fresh start. To deal with her mother constant criticism, Lucy was practically “forced” to find a strange, very unhealthy coping mechanism.

“There was something about Sean Cassidy that reminded me of the dogs that came into the shelter in New York, abused and mistreated, barking at everyone because they didn’t know who to trust.”

Sean is on her brother’s rugby team, being the most hated player in the team for one reason or another. He’s talented, good looking, but at times…most of the time he can be an arrogant bastard. He has a manwhore reputation, so Lucy doesn’t have any interest of getting to know him better, especially since in the past he was the biggest douchebag, hurting her brother. But maybe Sean has a reason to be this way. He’s jealous and lonely, but maybe he’s more than meets the eye.

When Sean meets Lucy, or more exactly when he gets to see her, the real her, he’s taken aback by her free spirit and rainbow hair. As time passes his attraction towards her grows and Lucy seems to be infatuated with him as well, but there are some obstacles in their way so a long term relationship between them seems almost impossible.

“Lucy Fitzpatrick was my drug of choice, and has quickly become a necessity. I had no desire to contemplate rehab.”

I really enjoyed this one. Not as much as the first book in the series, but it was an awesome read with a little bit of everything. The plot was solid, the writing flawless as always and the two main characters engaging and well portrayed.

Luci was an endearing character from the beginning. She was relatable, fun, full of life and I honestly liked everything about her – her colorful hair, her attitude, her love for her brother, her cuteness, her vulnerability. I loved how strong she was at times, her wittiness and also the fact the she was so thoughtful and considerate with Sean. In some way she recognized herself in the cocky rugby player and that’s why they complimented each other perfectly. Sean was not very easy to like in the previous book in the series. While at first Lucy believes he is the ultimate a$$hole even if she always tries to see the good in everyone, as the story progresses, Sean proves he is more than that. Much more!

“Sean was kissing me in a way that made my toes curl, my skin prickle, and my ladies parts clench with need.”

As times passes and Lucy gets to know Sean better she realizes everyone was wrong in some way about him, including her. She sees something in Sean no one does, she sees his sweet and funny side, making him also realize that he’s worth it, showing him how it feels to be cared and appreciated.

Sean was not your usual hero. He was not the alpha male you meet in many romance novels or the confident hero that has the power to make you swoon from the moment you meet him. He has flaws, insecurities and he doesn’t have much confidence. To be honest, I prefer a confident hero, but Sean’s portrayal was a nice change. Needless to say he was a very refreshing male character.

I liked how Lucy and Sean’s relationship progressed – in a very natural way. Their attraction was palpable and the romance between them was simply lovely. The steam factor was also fantastically done. Loved all the sexy scenes between these two characters. They were smocking hot!

All in all, ‘The Player and the Pixie’ was a fun, sexy and heartwarming read, with two endearing, well-developed characters, great dialogue and fantastic writing!