His best friend's little sister is all grown up … and ready to play in a whole new way.

Smith Hamilton has it all—he's smart, good-looking and loaded. But he remembers a time when he had nothing and no one, so he's not about to mess up, especially with his best friend’s little sister. That means keeping Evie at arm's length … even though the once pesky little girl is now a buxom bombshell. A sexy blonde who pushes his self-control to the limit the night she crawls into bed with him.

Evie Reed knows she's blessed—with an exclusive education, a family who loves her, and a new job managing social media for her family's lingerie company. But she wants more, like a reason to wear the sexy lingerie herself. She has just the man in mind to help with that. She's crushed on Smith forever. Surely tricking her way into his bed will force him to see her in a new, adult way.

Except that when Evie's plan leads to disaster, she and Smith must decide—ignore the attraction sizzling between them, or become play mates and risk it all.

Don't miss this sexy friends-to-lovers romp—get your copy of The Play Mate today!

“His best friend’s little sister is all grown up … and ready to play in a whole new way.” 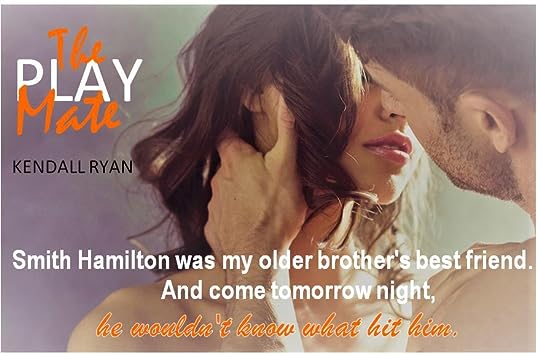 “The Play Mate” is book two in the “Roommates” series by Kendall Ryan and it is fast becoming one of my favourite series of the year. “The Play Mate” was a highly anticipated read for me as I love the ‘falling for the older brother’ trope and having said that, I do enjoy most forbidden romances I come across. So I was dying to get my hands on this naughty little treasure. If you’re looking for a fun-filled sexy read with a strong, determined heroine and a swoon-worthy hero, then definitely give this one a go.

Evie Reed has had a crush on her older brother’s best friend, Smith Hamilton, for years. She has a plan to sneak into Smith’s hotel room and have a “do-over.” Meaning, her first and only sexual experience left her more than underwhelmed and she plans to rectify that. She knows the perfect sexual partner in order to have her “do-over” with; that is Smith Hamilton.

“Somehow over the past couple of years, annoying Evie had morphed into curvy, hot-as-hell, infiltrating-my-dreams Evie, and it was slowly killing me.”

Evie convinces the concierge to give her a key to Smith’s hotel room. When she enters the room, it is pitch black and she wakes him up to the surprise of his life. Smith is under the impression the girl in his room is the one who he met earlier that night and gave him her phone number. The night turns into the most sensual and sexual night of their lives. When they are about to go “all the way” Smith realises the girl in his bed is in fact Evie. This discovery soon puts an end to their night of passion. 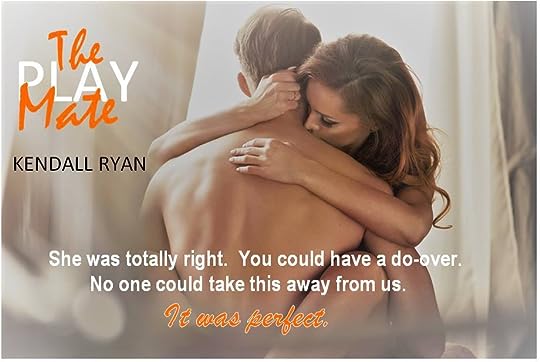 They decide to keep the night in the hotel to themselves and not divulge it to Cullen, Smith’s best friend and Evie’s older brother. This becomes a hard task when Smith and Evie discover they will be working together. The attraction they both feel towards one other proves to be impossible for them stay away from each other. Evie is certainly not the annoying little sister Smith’s known most of his life and therefore has some tough decisions ahead, as Cullen is like a brother to him and he doesn’t want to risk losing that.

“The Play Mate” is such a fast paced, sexy fun read with a touch of angst and emotion thrown in. I personally love a friends-to-lovers story and this one did not disappoint. It is a somewhat of a slow burn and the anticipation almost killed me, but I was not disappointed once the story came to fruition. If you are looking for a steamy, sexy romance, then definitely give this one a go.

➦I’ve only listened to this book last week and I’ve already had to re-read the blurb in order to remember the storyline here. I remember this book being pretty fast paced and rather short. I also remember wishing for more of something.

➦If you’re a fan of a “brother’s best friend” trope then you might enjoy this one. The heroine is very inexperienced in bed and she finally decides to rectify the situation by coming onto her brother’s best friend. She is under impression that it will be just this once and then they will never have to see each other again. Her plan doesn’t really go as expected.

➦Imagine their surprise when they both end up working for the same company. Like, in the same office. How are they going to get past the a) awkwardness b) crazy attraction to each other. And, perhaps, the most important question of all – will there be office sex?

➦So, I guess, you’re thinking “Thanks for a vague attempt at a review of this book, Maria!”

➦You’re welcome, I guess. But since this was not an ARC and I have a queue of 10 more books in need of my “constructive criticism” I hereby give myself a right to produce half-assed reviews.