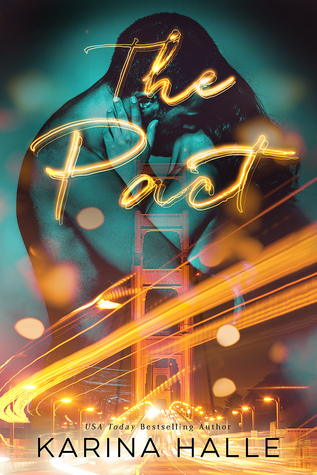 It all started with a pinky swear…

Linden McGregor is tall, rugged, and gunslinger handsome; a helicopter pilot with a Scottish brogue and charm to spare. He’s also one of Stephanie Robson’s best friends and has fit into that box for as long as she’s known him.

Back in their mid-twenties and tired of the competitive hit-or-miss dating scene of San Francisco, Steph and Linden made a pact to marry each other if neither one of them are in a serious relationship by the time they hit thirty.

It sounds like fun and games but as the years to thirty tick past and lovers come and go out of their lives, the pact becomes larger than life.
Sex is inevitable. Friendships are tested. Hearts are on the line.

The pact is about to change everything.

➦This book fell a little bit short for me. Some parts of this book I really liked but some parts were just “ok.”

➦The plot is nothing too original, it has been done before. Two best friends make a pact to get married at the age of 30 in the case of them still being single by then.

➦One thing I do like about Karina Halle’s writing is that her characters are very well developed. This book just didn’t do it for me because of the created drama, which in my eyes was so unnecessary that I had a major episode of eye rolling. The reason for the break-up between two main characters was kind of pathetic. I didn’t buy it for one second. Nobody is that selfless! It made Linden look like a complete wimp and I didn’t think he deserved a HEA. I was still pissed at him and I wanted to slap him with a rotten fish.