Chandler Alexander's The Makings of a Fatherless Child is a dark and riveting tale of a young boy, Amel River, growing of age in the Mississippi Delta all while trying to survive a broken home, poverty, fatherlessness, and a voice in his head that won't go away. With the wisdom of a drunken stranger King Lee, the unspoken love of his best friend Sea'Sea, and the innocent eyes of his two-year-old nephew Javion, Amel embarks on an unknown journey of truth, understanding, and forgiveness, hoping that his journey will lead him to experience his ultimate definition of freedom, a life worth living. 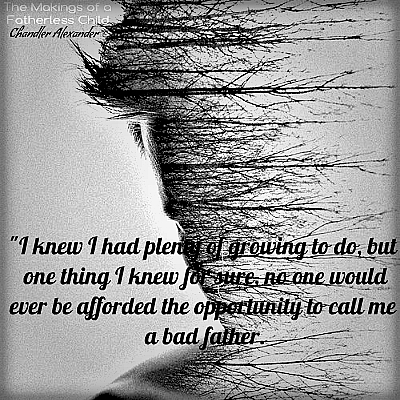 First of all, I have to admit I haven’t read too many realistic fiction novels so far, so when the author offered me the chance to read his first novel, I accepted being a little bit intrigued by the synopsis and most of all by the title. The synopsis promised this novel to be an emotional one and trust me when I say, it totally was. ‘The Makings of a Fatherless Child’ was a dark, gritty and heart-breaking coming of age story that grabbed my attention from the very first chapter. It wasn’t an easy read, firstly because my heart broke so many times for the main character, Amel and secondly because at times it was really depressing.

‘The Makings of a Fatherless Child’ fallows the life of Amel River from age 13 to age 18, focusing the most on his 15th year of life. Amel is from the wrong side of the tracks. Needless to say growing up in the Mississippi Delta wasn’t easy for this boy. He longs for his mother’s love and for his absent father’s attention. While his mother is abusive verbally and physically, his father wants nothing to do with him. But Amel desperately wants, NEEDS for his father to be there for him, to guide him on his journey to being a man. On his journey, Amel tries to find who he is, to find a father’s role in his child life and simply why sometimes life has to be so cruel.

Honestly this is all you have to know about this novel. In my opinion the blurb says way too much about the story. Personally I would have preferred to be more vague. The entire story is told from Amel’s point-of view which I loved. His voice was honest, strong and so unique. I felt deeply for this boy. His story was gut-wrenching at times and like I mentioned above, more times than I liked, depressive. It was really hard to read about his life, his reality, but at the same time heartwarming somehow to read about his needs and dreams. Because yeas, despite his reality, Amel has dreams. He dreams and hopes for a better life, for a caring family, for a future and I wanted so badly for him to have it all.

I found Amel’s character to be fantastically developed. His portrayal was pure and simply stellar, so realistic and for sure my favorite aspect of this novel. He was a complex, layered character that manage to make me feel so much. He made me smile, but he also made me so angry at times. His decisions at some point into the story saddened me or frustrated me and despite his dreadful actions I really wanted for him to have a future and find happiness. As the story progresses, Amel learns to love unconditionally, learns the value of friendship and also learns that every action has consequences. His love for poetry was something I hadn’t excepted, but I really liked. Every single one of his poems was honest, from the heart and I really enjoyed reading them. I have to say I really appreciated the fact the author stayed true to Amel’s character, but also to all the others supportive characters.

All the supporting characters in this book were fascinating. All of them were so well portrayed, were so raw and so flawed and dysfunctional. My favorite supporting character was without a doubt, King Lee. This man was so fascinating. Flawed and full of regrets, Kind Lee plays an important role in Amel’s life. He becomes Amel’s mentor and friend teaching him all kind of things about life, family, what exactly means to be a good father, but also about good and bad. I enjoyed reading about his theories and I loved his relationship with Amel.

The story was unpredictable from start to finish. It kept me at the edge of my seat and the multitude of realistic twists were interesting and engaging. While overall I enjoyed this story, I have to admit the ending left me a little unsatisfied. I just wanted something more. I know it was an open ending, but I really think it was a little too abrupt. That being said, I wouldn’t mind a sequel, because I have some questions that need clarification.

All in all, ‘The Makings of a Fatherless Child’ was a very well written, powerful and poignant tale. With a well-developed plot and intriguing characters this realistic novel will grip you from the start and it will make you feel, capturing your heart with its realness.