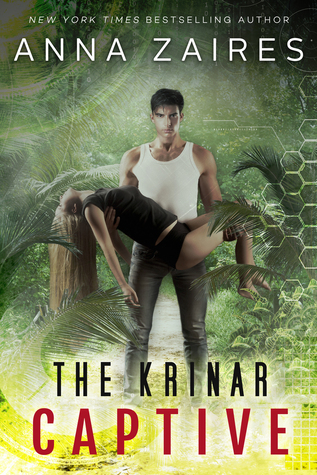 Emily Ross never expected to survive her deadly fall in the Costa Rican jungle, and she certainly never thought she’d wake up in a strangely futuristic dwelling, held captive by the most beautiful man she’d ever seen. A man who seems to be more than human…

Zaron is on Earth to facilitate the Krinar invasion—and to forget the terrible tragedy that ripped apart his life. Yet when he finds the broken body of a human girl, everything changes. For the first time in years, he feels something more than rage and grief, and Emily is the reason for that. Letting her go would compromise his mission, but keeping her could destroy him all over again.

NOTE: This is a full-length, standalone romance that takes place approximately five years before The Krinar Chronicles trilogy (aka Mia & Korum’s story). You do not have to have read that trilogy to enjoy this book.

I’m gonna be blunt and say that I didn’t love this book as much as I thought I was going to, as evidenced by the fact that it took me almost a full week to read it.

I want to make it VERY clear that the reasons I didn’t love it are completely on me, and are no indication of the quality of the book. I love Anna Zaires and I love the Krinar Series.

And the world she has created here is in one word: IMPRESSIVE.

When I saw there was going to be another addition to this series, I was super excited.

However, I must admit that, until I started the book, I was not aware that this was going to be a prequel to Mia and Korum’s story and not a sequel.

I knew it wasn’t about Mia and Korum, but I had assumed it was going to take place AFTER Mia and Korum’s story timeline-wise.

I didn’t realize this was going to take place before K-Day.

Meaning I didn’t realize that we were going into the story with Emily having no knowledge of the Krinar and who and what they were.

Now the reason this was an…issue for me is that we – through Emily – had to get the whole “I’m an alien – surprise” scenario and the whole Krinar “creation” story – AGAIN.

We had to deal with Emily’s concerns and worries regarding the Krinar and their intentions for humanity and Earth – AGAIN.

And, quite frankly, I felt like we already went through all of this with Mia and Korum and, as a result, a lot of this book felt like a rehash of things we had already worked through.

That – in conjunction with the fact that this plot didn’t have a whole lot going on outside of that rehashing- made certain parts of this book a little more tedious and slow-moving than I was expecting.

In fact, not gonna lie, I found the first 30% of this book to be borderline boring.

But what can I say. Thems the breaks.

Another thing I didn’t love about this book – and another thing that is completely on me, is the fact that the H in this book, Zaron, had a mate who died eight years prior.

A mate with whom, before she TRAGICALLY and SUDDENLY died, he had been with for 44 years.

Now, for those who follow my reviews, you already know that the dead-ex trope is just not my favorite thing.

In an effort to not be a hypocrite and rehash shit I’ve already discussed at length, here are some reviews where I discuss this in more detail, for those interested:

Otherwise, ya’ll know how I feel about this.

So, needless to say, I really wasn’t all that excited about this development.

Also, I just didn’t come out of this feeling satisfied with Zaron’s feelings for Emily independent of the dead-ex.

As I said, though, these are PERSONAL issues I had with the story that I know will be non-issues for other people.

Outside of these things, I really did like the story and feel that it’s definitely a must-read for fans of the series.