What’s sexier than a bad boy? A bad ass man who’s got his shit together.

Max Alexander is nearing thirty-five. He’s built a successful company, and he’s conquered the professional world, but he’s never been lucky in love. Focusing so much time on his business and raising his daughter, adulting has come at the expense of his personal life.

His social skills are shit, his patience is shot, and at times, his temper runs hot.

The last thing he has time for is the recently single, too gorgeous for her own good young woman he hires to take care of his little girl. She’s a distraction he doesn’t need, and besides, there’s no way she’d be interested. But you know what they say about assumptions?

This is book 3 in the Roommates series, but each can be read as a complete standalone, as they feature new couples. 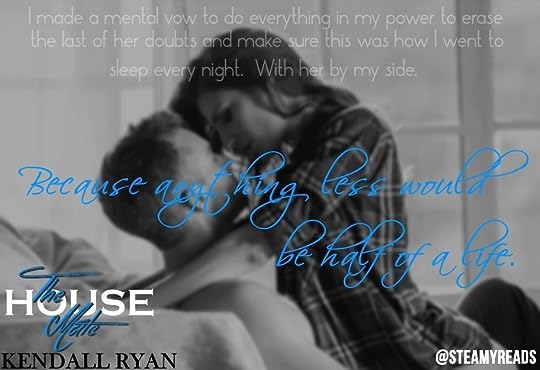 Well, Kendall Ryan has done it once again with another instalment of her Roommates series, The House Mate. I always look forward to another Kendall Ryan release because I know I’m in for a fun and sexy ride and The House Mate was no exception. If you are looking for a light, fun read which is relatively low on drama and angst then you should definitely give this one a go.

Max Alexander has built himself a successful construction business after his time serving as a ranger in the Army. He’s never had the desire to settle down or commit whole heartily to someone, or maybe he’s just never met that special person who makes him want the marriage, kids, white picket fence, etc…

Max’s whole life as he knows it changes one evening when his ex-girlfriend (I use the term girlfriend loosely) shows up on his doorstep with a one year old girl, Dylan who also happens to be the daughter that he didn’t know existed. Max is then left with a baby to take care of after the baby’s Mommy dumps her and leaves.

Max surprised me. I thought he was going to be an arrogant, surely or angry man but he really wasn’t. He was really sweet and the way he just fell in love with his baby and took on the responsibility thrust upon him literally melted my heart. Max knows he’s in need of some help and seeks out to hire a live-in nanny to take care of baby Dylan.

“My whole life, I’d never known I could love another person this completely. Suddenly, in a matter of less than two months, I’d found two people who had become integral to my happiness…vital to making my world right.”

Addison has had a really rough time of late. She’s lost her job and her home all resulting in the bad breakup with her boyfriend. While sleeping on her best friends couch, she comes across a job notice looking for a live-in nanny. This is the answer to both her home and job problems. Addison was in no way prepared to how instantly she would become attracted to her new boss, Max.

The attraction and desire between Max and Addison was instant but knowing neither of them can do anything about it made for a tricky situation. It wasn’t until Max couldn’t stand the desire and longing he felt for his nanny any longer he came clean about his feelings and offered her a proposition, while still hoping to keep their relationship professional during working hours. It was one thing I loved about this story, and Max, is the fact there was no fluffing about and he was honest about how he felt. Even if I did think his proposition was never going to work.

I really enjoyed this fun and easy read and I would most definitely recommend this story to anyone who not only loves their inked bad boys but also their single dads.