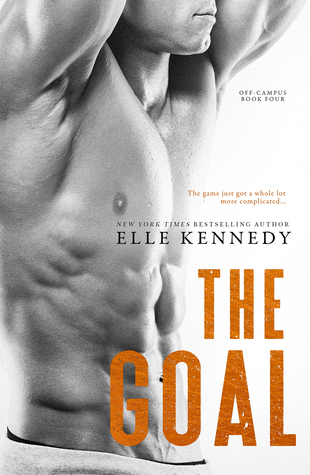 She’s good at achieving her goals…

College senior Sabrina James has her whole future planned out: graduate from college, kick butt in law school, and land a high-paying job at a cutthroat firm. Her path to escaping her shameful past certainly doesn’t include a gorgeous hockey player who believes in love at first sight. One night of sizzling heat and surprising tenderness is all she’s willing to give John Tucker, but sometimes, one night is all it takes for your entire life to change.

But the game just got a whole lot more complicated

Tucker believes being a team player is as important as being the star. On the ice, he’s fine staying out of the spotlight, but when it comes to becoming a daddy at the age of twenty-two, he refuses to be a bench warmer. It doesn’t hurt that the soon-to-be mother of his child is beautiful, whip-smart, and keeps him on his toes. The problem is, Sabrina’s heart is locked up tight, and the fiery brunette is too stubborn to accept his help. If he wants a life with the woman of his dreams, he’ll have to convince her that some goals can only be made with an assist.

I usually don’t read too many reviews on a book that I REALLY want – and pretty much know I am going to read no matter what (which is kind of a given for me when it comes to Elle Kennedy and this series) until after I’ve read it – but I broke my own “rule” on this one and read a few.

Random tangent: I laughed at myself when I typed in “rule” up there…being that I don’t see rules as being rules so much as I see them being…loose guidelines when it come to a lot of things…

Unless those rules are actually referred to as LAWS.

And live in large book titled THE PENAL CODE.

In which case I prefer to fall in line like a good little sheep so as to not end up being Big Barb’s 3rd prison wife and end up on Big Love: The Prison Years.

But anyprisonlove, as I was saying.

When I broke my “loose personal guideline,” I read a few reviews that made me believe I would come out of this thinking that Sabrina was a heinous bitch who didn’t deserve Tuck.

Now, while I feel like that is a subjective and totally fair assessment – and I absolutely understand why a lot of people felt that way – I personally found myself really liking Sabrina.

Though she didn’t necessarily say it until the bitter end, I could feel her love for Tuck throughout the majority of the book. Even though she might not have verbally expressed her feeling for him, I felt like she showed it in other ways.

She felt guilt because she felt like she had trapped him. And she didn’t want him to feel trapped because she cared about him.

She didn’t want him to feel like he had to be with her just because of you know what.

So even though it seemed hurtful when she told him to go ahead and date other people if he wanted, I understood it. And I saw that as being the action of someone who was being unselfish and trying to do what they thought was best for someone they love, no matter how much it might hurt.

I thought this was a very character-encompassing quote about Sabrina, and from Sabrina herself no less:

“I’ve been a largely solitary person my whole life, avoiding Nana and Ray when I could. At Briar, I made friends with Carin and Hope but didn’t feel the need for a bigger, more extensive circle.”

I too have always been a more “solitary” person, preferring to spend my time with mostly just my family, my husband, and a few close friends.

So I felt like I understood and empathized with Sabrina; however, AT FIRST, being that she was such a strong willed and opinionated person, I did having a hard time believing that she would stand for so many obnoxious comments from people, especially in regards to what she should do about her pregnancy, without telling them to shut right the fuck up.

Because if Tucker’s bitch ass mother (whom I didn’t like from the get-go, before her c&*t-worthy behavior even got to the party) had said some of that shit to me her ass would have been making a meal out of the sidewalk pavement I would have drop kicked it so fucking hard.

But after further reflection, perhaps that is just what I’d like to think I would do.

Which brings me to another main point in this story…

Sabrina’s inner contemplation in regards to having the baby or not…and other people’s reactions.

Or as I like to call it: Rude ass people saying rude ass shit about stuff that is none of their rude ass business.

The things that people say in regards to reproduction and OTHER PEOPLE’S reproduction never ceases to amaze me.

Yep, you read that right.

And my husband doesn’t want kids.

WE AREN’T HAVING KIDS.

But you would be shocked – SHOCKED – at some of the things people – especially women – feel free to ask or tell me when it comes to children and their thoughts on ME not having any.

Here are some of the highlights for your perusal..

From a virtual stranger I had just met at a party…”Were were abused as a child or something?”

Gee, no I wasn’t. But thank you so much for insulting both me AND my parents in one fell swoop.

From an acquaintance…”Well, that’s cool. Although I have to say I didn’t truly feel like a complete woman or that my was life was complete until I had kids.”

Gee, that’s great. Thanks for telling me that you think I’m a perpetual half-girl leading an unfulfilled life. From my sister…”But now MY kids won’t have cousins.”

Gee…thanks for that EPIC serving of Condemnation Soup. And my personal favorite…”But who will take care of you when you are old?”

Gee, wasn’t it you who was just telling me a month ago about how you caught your son pawning some of your shit to support his prescription drug habit…AFTER you sent him to a $30k rehab facility?

Well, I’m sure he’ll change your adult diaper just fine in 20 years…right after he finishes cashing your Social Security check and buying you some off-brand Ensure because he spent the majority scoring some Xanax.

But AnyNotAnEvilWitchJustCauseIDon’tWantToProcreate, my point here is – there is one I swear – at first I had a hard time buying that people would actually say some of the shit they said to Sabrina and that she would react the way she did.

When some of the characters told her she should have an abortion, for sure have the baby, or give it up for adoption and she had no response? Which at the time seemed out of character to me?

I remembered that sometimes normally awesome and great people really CAN be that rude and ridiculous when it comes to the subject of procreation.
And they WILL say some heinous shit.

And you literally have NO idea how to respond.

I apologize, Sabrina, for doubting your characterization there for a moment, because I stand corrected.

So I liked how this book really captured that struggle.

I also really liked the connection between Sabrina and Tucker. It felt really palpable to me and their sexy times were hot hot hot.

As always, Kennedy’s writing was flawless. I really love her writing style. It’s seamless and engaging and I truly get lost in it. The verbal banter between characters is also phenomenal too, which is something I always enjoy.

So all in all, I really enjoyed this book. And I am sad this series is over.

Now to check out this “Royals” thing…