Nikolai Alexei Young was born with a special gift…one he’d do anything to lose. The heart and soul of every person he comes into contact with is an open book to his heightened senses. Colorful emotions, whispers of thoughts, the sour tastes of old memories…He feels them all. The sci-fi books would call him an empath. For Nikolai, his ability has made him an exile. He roams the U.S. alone, avoiding the glut of life in big cities, and using his innate talents to win money in underground poker games. Just enough to keep going, one town to the next. He has no hope that his life can be anything else, until he meets her…

At nineteen, Fiona Starling was trapped in an ugly, desperate situation until she freed herself the only way she knew how. Now three years later, living outside Savannah, Georgia, she is rebuilding her life on her own terms; seizing every moment and saving every penny so that she might fulfill her dream of moving to the raw wilderness of Costa Rica. But behind her carefree smile beats the heart of a lonely young woman haunted by her past, until a chance encounter with a tattooed stranger changes everything…

Fiona takes Nikolai under her roof for three sultry nights, waiting out the rain of a summer storm. She grows more and more fascinated by this brooding stranger with whom she shares an intense physical connection—a connection so strong, she wonders if there is something between them beyond lust and passion. Nikolai is shocked to discover that Fiona calms the raging turmoil in his heart. She alone silences the din of other people’s lives, and envelops him in the sweet beauty of her inner self. Every moment he’s with her—every touch of her skin—brings him closer to the peace that’s been eluding him his entire life.

But Fiona harbors secrets that she is too terrified to reveal. After Nikolai confesses his unique ability, she is caught between wanting to believe him and fearing he’ll eventually unearth her own dark past. When the unthinkable happens, Fiona’s plans come crashing down, and Nikolai discovers his hated ability might be the only thing that can save the woman he loves.

Sugar & Gold is a STANDALONE new adult romance with shades of the paranormal. Intended for readers 18 and up. 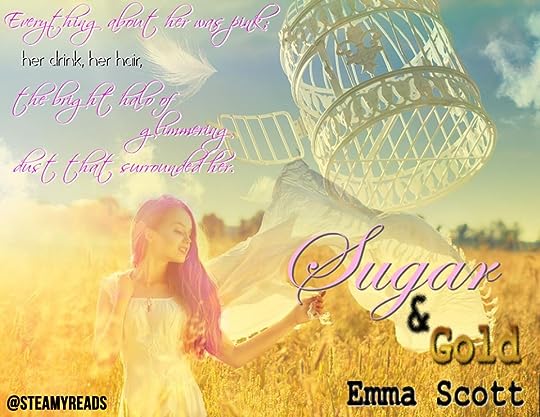 Wow… Just Wow! Every time I read a book from Emma Scott it fast becomes my new favorite; that is until she releases a new story and that one then becomes my favorite. Emma Scott always has the ability to capture me from the very first page with her powerful and touching plot lines and unforgettable characters that I devour and enjoy every page of. Sugar & Gold was such a unique and moving story; an absolute treasure that everyone, who loves a great story should discover.

I wholeheartedly loved and adored Fiona. Her determination and passion was inspiring to me. The way she strives to live her life the way she sees fit, her determination to see through her plans for the future and her desire to be happy made her a loveable character. I loved the relationship she had with her canary Lemony and the way that they would converse. Lemony literally stole my heart. Fiona is determined to leave the ghosts of her past behind and move on from all the bad things that have ravaged her mind and thoughts. Even though Fiona has not had the easiest life in her short twenty three years, she is still very strong and never lets those things diminish her vibrancy and spirit.

“No rules. Live out loud. Find the sunshine.”

My heart absolutely shattered for poor Nikolai, he was such a beautiful broken person. He has been dealt with his fair share of suffering and as a result is always trying to escape not just from everyone else, but also from himself. He hides behind tattoos and piercings and thrives on the pain they bring. Nikolai has been born with a gift (ken) or a curse as he sees it. He doesn’t want these powers and just wishes he was “normal.” He has a desire to love and be loved deeply and I just felt for him and the pain he was suffering.

When Fiona and Nikolai meet there is an instant attraction and chemistry; two broken souls coming together in order to heal one another. They were both able to find the peace, love and trust they had been searching for.

The character development was second to none. I felt everything these characters had endured and were going through. It was like I was a part of this spectacular journey and they became a part of me and I know that I will never forget them.

Sugar & Gold is a beautifully written story of love, hope, strength and finding that special person to complete and heal your broken self. Even though this story is classified as paranormal/fantasy, the elements are quite minimal and even if you’re not a PNR fan, don’t let that deter you. as long as you love a spectacularly heart-felt story that will remain with you long after the last word is read, then definitely check this one out. I COULD NOT RECOMMEND THIS UNFORGETTABLE STORY HIGHLY ENOUGH!