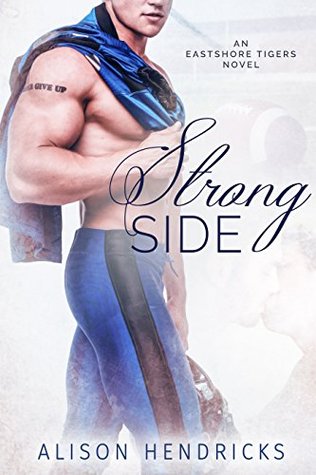 Their chemistry on the field is undeniable. But can they ever be more than friends?

Jason Hawkins is about to throw the biggest Hail Mary pass of his career.

If he can't turn NFL recruiters' heads this year, he'll lose his shot at the one thing he's ever been good at. But every quarterback needs a man he can count on down-field. For Jason, that man just might be the Tigers' new receiver, Derek Griffin.

Four years ago, Derek nearly lost everything after being outed by his teammates.

Now he finally has a chance to get it all back as a walk-on for Eastshore College... if he can resist his immediate attraction to the gorgeous and very straight star quarterback.

An instant connection during practice leads to an easy friendship that only grows stronger off the field. Derek is convinced friendship is all it'll ever be, but a very confusing moment of impulse leaves both of them fumbling for answers about their relationship.

As curiosity gives way to passion and passion gives way to something deeper, Jason and Derek will have to tackle their own personal demons to bring home the win and earn their happy ending.

‘Strong Side’ surprised me in a very good way not only because it was a an entertaining read, but also because it was a great debut. If you are like me and prefer your m/m reads to be sweet, sexy and low in angst and also drama, then you will want to try this one as soon as possible, because this little gem was the perfect blend of sweetness and sexiness, with great plot and two endearing character you will fell for from the very beginning. A friends to lovers/GFY story‘Strong Side’ is the first installment in Alison Hendricks’s‘Eastshore Tigers’ series and tells the story of two football players who together find more than friendship – comfort and love.Derek Griffin is the team’s new football player. He’s gay, but no one knows it since he prefers not to advertise anything about his sexuality. He’s out, his family knows about it being cool and supportive, but he knows not everyone is like that. What happened to him when he was in high school can confirm that, so Derek is a little afraid to come out in front of everyone he knows. Needless to say, his teammates don’t know anything about it. The sad thing is the tragic events in his past left him with some issues regarding his play.

Jason “Hawk” Hawkins is an All Star senior, the best player on campus, the poster boy of confidence and masculinity and unfortunately for Derek who feels a strong attraction towards him, is straight. When Jason figures out Derek has some issues on the field, he offers to help him since he realizes how talented his teammate is. Soon after, they become the best of friends and as their friendship grows Derek lets Jason know that he’s gay and also some things about his past. As they spend more and more time together training or simply hanging out, Derek and Jason slowly become something more.

I enjoyed this one! It was exactly how I like my m/m reads – easy to read, entertaining with a good dose of steam and some sweet and lovely moments between the two main characters. The story line was entertaining and I found the writing to be pretty engaging, so I’m looking forward to read the next books in the series. The two main characters, Derek and Jason were both endearing and both of them well portrayed. I liked Derek for being patient with the other boy and Jason for being honest with himself, with Derek and also with his father. There wasn’t much drama regarding Jason’s feelings towards Derek which I liked. It was exactly enough for everything to be believable without the story being too angsty. In fact, the angst was really low which it was fine with me.
Like I mentioned above the story has enough sexy scenes between these two boys to keep you entertained, but also some good sweet, lovely moments to make you root for them.