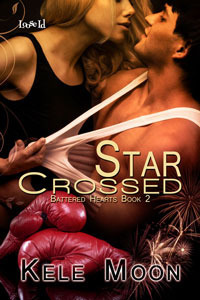 He's a Heavyweight UFC fighter with a criminal past and deep family ties to the Italian Mafia. She's from the small southern town of Garnet, where her family has been the law for the past six generations and MMA is the only language people in her neck of the woods speak.

Their MMA camps are rivals.

Everything about their lives makes them enemies.

Their love isn't just forbidden, it's deadly, but they can't seem to help themselves.

Romeo Wellings comes from the hard streets of New York where his unwanted ties to organized crime cause him nothing but pain. Everything changes when he crosses paths with the twin sister of his long-time enemy. After a steamy, one-night stand he faces the fight of his life, but it's not in the cage. The secret relationship that blooms between Romeo and his real life Juliet has him battling his family and a dark past rather than let her go.

The only lawyer in her hometown of Garnet, Jules Conner is also a volunteer Sheriff's deputy and co-owner of a successful MMA training center. Strong and dependable, Jules is always there for those who need her. Until one forbidden night in Las Vegas with Romeo leaves her feeling so alive she can't stop reaching out to the sexy, bad boy of the UFC, even knowing the forbidden love affair could jeopardize everything.

As the tide rises against them and the people they love work at keeping them apart, Romeo and Jules hold onto a dream for a better life together and vow to go down fighting rather than accept a tragic ending.

The two main characters had a lot of chemistry and great characterization overall.

The peripheral characters were also very good and I look forward to the next one featuring this female lead’s twin brother. I loved the UFC backdrop.

The only thing that made it less than 5 stars was the ending, which seemed kind of rushed to me.