The Acquisition has ruled my life, ruled my every waking moment since Sinclair Vinemont first showed up at my house offering an infernal bargain to save my father’s life. Now I know the stakes. The charade is at an end, and Sinclair has far more to lose than I ever did.

But this knowledge hasn’t strengthened me. Instead, each revelation breaks me down until nothing is left but my fight and my rage. As I struggle to survive, only one question remains. How far will I go to save those I love and burn the Acquisition to the ground? 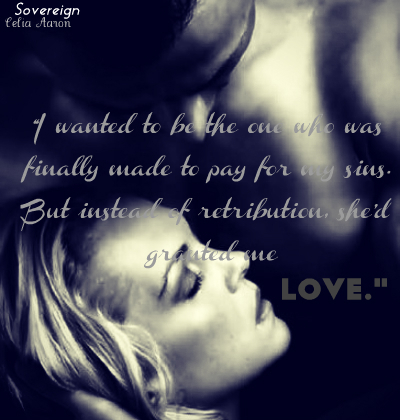 ‘Sovereign’ is the third and final installment in Celia Aaron’s dark series entitled ‘Acquisition’ and picks up right where the last book ended. This third installment is as thrilling and addictive as the previous ones. Mrs. Aaron delivered a great conclusion to this series filled with suspense, steam and action and from the beginning until the end it kept me at the edge of my seat. Liked its predecessors, this final book in the series is dark, all kind of twisted and even disturbing at times.

Stella has come a long way since she became Sinclair’s property. She accepted to save her father, but now that she knows that Sinclair has far more to lose than she ever did, she’s decided to survive, to burn the Acquisition to the ground, to help herself and at the same time to help Sinclair and his family. Stella has to survive two more trials before the name of the next Sovereign will be known. She’s training trying to prepare herself physically for everything Cal, the current Sovereign has in store for her.

While Stella tries to stay strong, not only physically, but also mentally, Sinclair has another strategy to try to find out more about what will happen in the upcoming trials, but his strategy and also behavior makes Stella question his feelings for her and also his loyalty.

‘Sovereign’ was without a doubt my favorite book in the series. Intense and fast-paced, this installment was crazy and twisted as f@ck. Celia Aaron is a great storyteller and like I mentioned above the entire time reading this installment I was at the edge of my seat. There were so many heart-pounding moments…oh my…I couldn’t read fast enough.

The cast of characters, the main and supporting ones were vividly portrayed. Both Stella and Sinclair were well developed, engaging and their dynamic one again was complex and fantastically done. Needless to say their connection was palpable and stronger than ever here, well for a good part of the story. Once again, the sex scenes between them were intense and smoking hot. I found Stella’s character to be very endearing. Her strength and determination were admirable and the fact that she was willing to sacrifice everything to save…everyone was heartwarming to say the least. She was genuinely a good woman, caring and loving and so considerate at times. Sinclair was such a complex character. There wasn’t a moment when I questioned his loyalty towards Stella even if his actions said otherwise. I guess, I trust him a little more than our heroine.

The plot was complex and well structured and like the other two installments in the series, this one is told in dual POV.

All in all, ‘Sovereign’ was a fantastic conclusion to Stella and Sinclair’s story – fast paced, suspenseful and full of twists and turns that will leave you guessing until the end.