I’m now a reluctant connoisseur of both—an expert through immersion. I know them intimately.

When I fell in love with Miranda, it was swift and blind. She was the person I’d elevated to mythical status in my head, in my dreams.

That was Miranda. She was smoke.

Over time reality crept in and slowly dissected and disemboweled my dreams like a predator, leaving behind a rotting carcass.

Reality can be a fierce bitch.

who believes in dreams.

Note from the author: Due to strong language and sexual content, this book is recommended for mature audiences only. 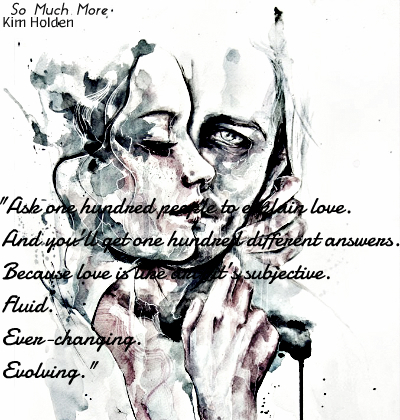 This one was SO MUCH MORE than I had expected. It was my first read by this author and I’m happy to say that I really enjoyed her writing style and her storytelling. This book simply blew me away. I honestly couldn’t put it down. It was sooo different from what I had expected. This story will hit you right in the feels, it will make you reflect, it will touch your heart. A very unique, refreshing read, ‘So Much More’ was a story about love, family, friendship, second chances and so much more.

“Seamus can’t be the king to my queen. Because he’s a saint. And no one measures up to a saint.“

‘So Much More’ fallows the story of Seamus, a thirty something man whose life changes when he finds himself in the middle of a divorce. He has three children he loves with all his heart and he would do pretty much anything for them. Unlike Seamus, Miranda, Seamus’s wife and later ex-wife doesn’t care about the kids at all. Well…at least at first. While Seamus struggle with his illness and tries to raise healthy, happy kids, Miranda continues to be herself – an evil b*tch without a heart, trying to destroy Seamus’s happiness.

“She’s contrast. She shines effortlessly, unknowingly imploring me to take notice. It’s an attraction I wholeheartedly feel but have unconsciously tried to deny.”

Seamus’s life changes for the better when he meets Faith, a gentle soul who seems to understand him like no other. She’s a tenant in the apartment building Seamus and his children moved into. Faith is Miranda’s opposite in every way. She’s good and caring and she feels like a breath of fresh air not only for Seamus, but also for the kids.

“I didn’t know people could hug your soul with their soul. Faith can.”

I loved this one! Like I previously mentioned – it was a very refreshing read, not exactly your usual contemporary romance story. As a reader, I love when a book makes me fell and this one really did. Trust me when I say at times my emotions were all over the place. The author did a fantastic job telling this story because you will feel everything there is to feel. I guarantee it!

The story is told in multiple POVs which I really enjoyed. Each one of these POVs were well done and I enjoyed them all for one reason or another. However, my favorite one was Seamus’s.

Seamus was such a great character. I swear he can easily win the award for the perfect hero. A handsome man, a devoted husband, a fantastic father, Seamus was pure and simply wonderful. He was vividly portrayed and so endearing from start to finish.

While I found Seamus’s character to be the most endearing character in the story, I found Miranda’s character to be the more fascinating. Her character was fantastically portrayed. Miranda was one of the most despicable characters I’ve read in a while. This woman was such a b*tch. Needless to say most of the time I wanted to throttle her, punch her in the face and then throttle her some her. Trust me when I say that she deserved it. As the story progresses we get to meet a “new Miranda”. She didn’t won me over at all. For some reason I couldn’t sympathize with her at all. Maybe because her redemption wasn’t totally believable to me.

“I like your heart, Seamus.” She cups my cheek, kisses me softly on the corner of my mouth, and whispers, “My heart really likes your heart.”

Faith was a likeable character from the moment she was introduced. I like her and her role in the story. She was perfect for Seamus in every way, kind and loving she tried to show our hero that he’s so much more than he thinks, that not everyone else is and loves like Miranda, that he doesn’t have to give up on love.

All these characters were so well developed and every single one of them felt so real. Each POV felt honest in their own way and like I mentioned above you will feel all kinds of emotions reading their story.

The romance aspect of the story between Seamus and Faith was not the most important, but I have to say I really liked it. The slow burn romance between these two was well done, simply lovely and really heartwarming.

Overall, this was a very good read, well written with a “healthy” dose of drama, entertaining characters and a well developed plot.