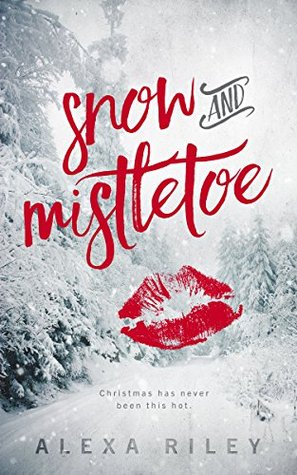 Noelle's voice has captivated Alex, and she's become his greatest obsession. Since he hired her to read audiobooks, listening to her is the only thing that makes his lonely world bearable. Thank God she's never seen him. His scars would only scare her away.

Alex has starred in every fantasy Noelle's had since she first heard his voice over the phone, and reading erotica samples to him only fuels her desire. Listening to him on the other end of the phone is the best part of her day, and she's willing to do anything to please him.

On Christmas Eve a storm comes through, sending Noelle in search of her reclusive boss. Once she's at his cabin with no place to go, there's only one way to keep warm.

Warning: This is the sweetest, cheesiest, most Christmassy book ever! It's filled with late-night confessions, dirty deeds, and a lifetime of love. If you love this time of year, I've got some cheer for you!

Although not my favorite of Alexa Riley’s by any means, it was a super cute, fun Christmas read and it hit the spot.

It felt different to me than a lot of her stuff…maybe it’s because the two characters “meet” via phone. He hires Noelle as one of his readers… …And they fall in love with each others’ voices.

Anylameway, it was a cute, decently smutty little Christmas read for when you are in the mood for it.

It’s even shorter than her normal stuff, so perfect for standing in line while finishing up some last minute Christmas shopping.