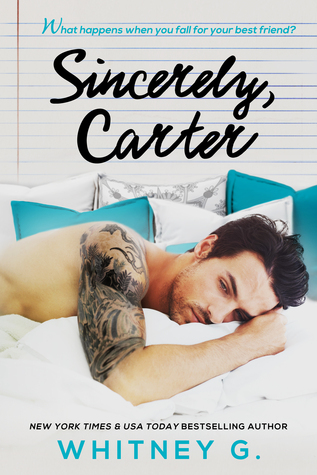 Arizona Turner has been my best friend since fourth grade, even when we “hated” each other. We’ve been there for one another through first kisses, first “times,” and we’ve been each other’s constant when good relationships turned bad. (We even went to colleges that were minutes away from each other…)

Throughout the years, and despite what anyone says, we’ve never crossed the line.

Never thought about it.
Never wanted to.

Until one night changed everything.
At least, it should’ve ...

Just friends.
We’re just friends.
I’m only saying this until I figure out if she’s still “just” my best friend…

Aw man wtf is wrong with me?
➦I might be PMSing or it might be that I’m SUCH A SUCKER for friends to lovers romances that I’m sobbing like an idiot.

➦I was so rooting for these two it’s not even funny. I was even willing to overlook the whole ridiculous way they both finally “saw” each other on the same exact day.

➦The only question I have for Whitney Gracia Williams is:

Because I really want to see some babies and rainbows and unicorns.