The stunning conclusion to the New York Times Bestseller. NOT A STANDALONE. Please read Marriage Games by C.D. Reiss first!

There’s one, unbreakable rule in the game.

Stay collected. Compartmentalize. Think your next move through. Never let your heart dictate your tactics.

The heart is impulsive.

Because the heart may have decided to get Adam back, but when the endgame comes, the heart’s going to be the first thing to break. 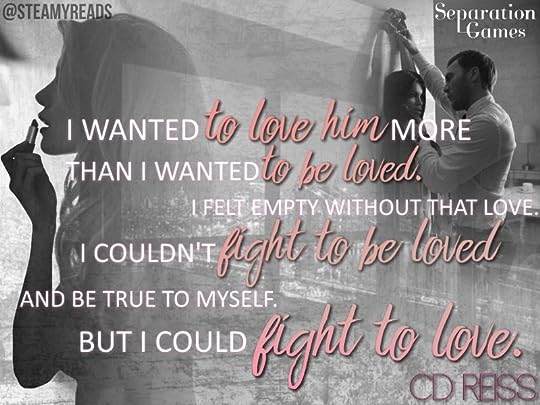 ➦Well, this was certainly an interesting conclusion to the story. Although this book was hard to put down and I loved it there were certain parts of it I wished were different. Or more specifically I wanted more of what was in book 1, primarily Adam the super dom.

➦This installment picks up with Diana deciding she is going to fight for her husband. There’s just one tiny problem. Adam seems to be experiencing personality changes. Or something. The whole thing is a bit of a mind fuck, actually. lol It’s a tricky situation:

✔Diana fell in love with the dominant Adam.
✔Adam can only love Diana when she doesn’t submit.

➦So what the fuck to do?

➦Perhaps Diana should find a new dominant to “train her”? After all, going back to vanilla after what transpired in book 1 (naughty naughty) is not possible for her. How is she going to fix this clusterf#%&?

➦So everything was up in the air and I could definitely feel the uncertainty of the situation. I also didn’t have a clue where the book would take me and that, on it’s own, is pretty refreshing. Adam was very conflicted in this book and we could see both sides of him emerge – the gentle lover and the dominant.

He took my hand, putting it in his lap as if it was finally home. “What are we doing?” he asked.

“If you’re going to do something, I say, do it all the way.”

He squeezed my hand. I was jarred by the way he looked in the direction of the window, but not through it. He didn’t look like the commanding Dominant who had been my partner for the past few weeks. As handsome as ever, and graceful and sharp, a leader and a decider, but not the same.

The streetlights glinted off the light in one eye and his jaw locked, catching things he’d never say. He looked like a man I knew and abandoned. Manhattan Adam.

“We can’t fix it,” I said, putting his hand in my lap, watching our clasped hands make a new form. I rubbed the outside of his thumb with mine, feeling it’s familiar shape, the strength of the knuckle and the texture of his skin on mine. “We have to build something new. And we can.” I looked up from our hands to his face.

Could I make him feel my optimism? Could I take a piece of it onto a fork and lift it to his lips? Would they part? Would he let me lay it on his tongue? Would he chew and swallow, saying “I do. I do believe we can, I do.”

He didn’t say that. He didn’t believe, but his lips needed to touch my belief and his tongue needed to taste my hope.

I don’t know if I kissed him or if he kissed me, but it felt like a first kiss, with full quivering that left me paralyzed at his nearness. The act of two tongues tasting each other was so intimate between strangers, so taken for granted over time, and so rarely is the wonder of it felt through to the bone.

He was licorice. Fennel and leather. And he moved like cool water, reacting to my movements, countering with his hands and his mouth, covering me with his attention. The kiss was the sway of sex, the smell of it, the carnal desire without the promise of anything but another dance.

CD Reiss is a USA Today and Amazon bestseller. She still has to chop wood and carry water, which was buried in the fine print. Her lawyer is working it out with God but in the meantime, if you call and she doesn’t pick up, she’s at the well, hauling buckets.

Born in New York City, she moved to Hollywood, California to get her master’s degree in screenwriting from USC. In case you want to know, that went nowhere, but it did give her a big enough ego to write novels.

Critics have dubbed the books “poetic,” “literary,” and “hauntingly atmospheric,” which is flattering enough for her to put it in a bio, but embarrassing enough for her not to tell her husband, or he might think she’s some sort of braggart who’s too good to chop a cord of wood.

If you meet her in person, you should call her Christine.