Life is a mixed bag for Piper Calloway.

On the one hand, she’s a twenty-nine-year-old VP at her dad’s multibillion-dollar real estate development firm, and living the high single life with her two best friends in a swanky downtown penthouse. On the other hand, she’s considered a pair of sexy legs in a male-dominated world and constantly has to prove her worth. Plus, she’s stuck seeing her narcissistic ex-fiancé—a fellow VP—on the other side of her glass office wall every day.

Things get exponentially more complicated for Piper when she runs into Kyle Miller—the handsome new security guard at Calloway Group Industries, and coincidentally the first love of her life.

The guy she hasn’t seen or heard from since they were summer camp counsellors together. The guy from the wrong side of the tracks. The guy who apparently doesn’t even remember her name.

Piper may be a high-powered businesswoman now, but she soon realizes that her schoolgirl crush is not only alive but stronger than ever, and crippling her concentration. What’s more, despite Kyle’s distant attitude, she’s convinced their reunion isn’t at all coincidental, and that his feelings for her still run deep. And she’s determined to make him admit to them, no matter the consequences.

Another one that I enjoyed and loved by this talented author!! Love her writing!!!

Kyle and Piper have met in the past, and sparks ignited. They were torn apart by the end of that summer. Why? We are taken on a journey from past to present back to past. Its intriguing, its exhilarating, yet at times, so dang frustrating!!! There were parts of this story I couldn’t turn the pages fast enough. Tons of feels, total recommend to those Contemporary Romance lovers, and YA lovers!! 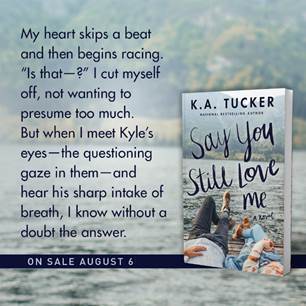