Soren Decker. He’s the epitome of the “bad boy, good man” persona. The best of both worlds. The worst of them too. He’s the type of guy most girls wouldn’t mind sharing a confined space with, except my new roommate isn’t all swagger and chiseled abs.

He’s bossy. Messy. Cocky. Infuriating. Doesn’t believe in personal space. Has no qualms about roaming the apartment with a loincloth-sized towel cinched around his waist. Seems under the delusion he’s my personal protector (refer back to infuriating). He plays college baseball and holds down a part-time job—I don’t know where he finds the time to get on my nerves.

We have nothing in common . . . except our attraction to one another. And in six hundred square feet of shared space, the tension only has so much room to grow before one of us gives in to temptation. But really, what chance do a couple of young kids chasing their dreams in the big city have of making it?

Since Soren claims I know squat about sports (he might have a semi-point), here’s a stat for him—one in a million. That’s our odds. 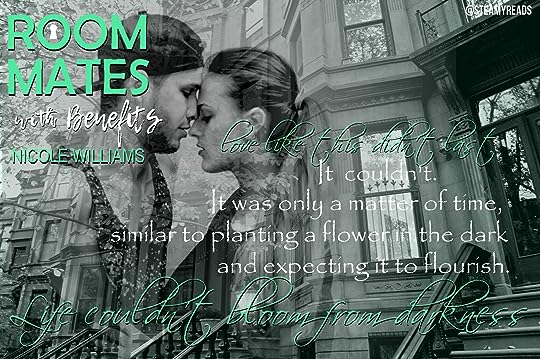 Roommates with Benefits was a HIGHLY ANTICIPATED READ for me. It’s no secret that I am a HUGE Nicole Williams fan and when I found out she was releasing a another new book I was all in, especially considering I am still suffering from a massive hangover from reading Tortured recently. If you’re a fan of entertaining, light-hearted reads with hilarious witty banter and bucket loads of sexual chemistry; involving a sassy, smart mouth heroine and a swoon worthy, sexy as sin hero then definitely one click this.

Nicole Williams poses a question… What chance do a couple of young kids chasing their dreams in the big city have of making it? ONE IN A MILLION?

Hayden Hayes has moved to the bright lights of New York City from the small town of Hastings, Nebraska, to chase her dreams of becoming the next top model. She’s arrived with no more than a suitcase, a sleeping bag, a pillow and the clothes on her back. With no money and no jobs booked as yet, her choices are very limited.

Prior to arriving in New York, Hayden had answered a roommate wanted ad, but when she arrives at said apartment, it and her new roommate are not at all what she expected. She has no other options then to take her new roomie up on the offer to move in to the six hundred square foot dingy apartment.

NOW… If you are looking for a hero to get your blood pumping then look no further than Soren Decker, he will seriously make you swoon. Soren is playing college baseball and has dreams of one day making it as a professional ball player.

Soren was the perfect hero for me; he was really sweet with a heart of gold, a complete smart ass, cocky and protective in all his alpha glory. Right off the bat (excuse the pun), there is nothing he would not do for his new roomie Hayden, except tidy up after himself. But lets face it, boys are slobs. In his defence though, he does go to school, occasionally study, play ball and work part-time so the little time he does have on his hands, he chooses not to clean.

I loved this couple; they just worked really well together and were a match made in heaven. Their attraction and intense chemistry had me flipping the pages faster than I was reading. There are some hard times and hurdles Hayden and Soren have to try to overcome together; throughout it, I found myself rooting for them to work because they were just meant to be. The odds may be stacked against them, but with love on their side I hoped that would be enough for them to prevail.

Roommates with Benefits was such a great, well written, easy-going read with characters I adored from the get go, especially Soren… SIGH! This book has the typical chemistry and pizzazz I love to read and I strenuously suggest you check it out. I always look forward to a new Nicole Williams book and I can’t wait to see what she comes up with next.

Nicole Williams is the New York Times and USA TODAY bestselling author of contemporary and young adult romance, including the Crash and Lost & Found series. Her books have been published by HarperTeen and Simon & Schuster in both domestic and foreign markets, while she continues to self-publish additional titles. She is working on a new YA series with Crown Books (a division of Random House) as well. She loves romance, from the sweet to the steamy, and writes stories about characters in search of their happily even after. She grew up surrounded by books and plans on writing until the day she dies, even if it’s just for her own personal enjoyment. She still buys paperbacks because she’s all nostalgic like that, but her kindle never goes neglected for too long. When not writing, she spends her time with her husband and daughter, and whatever time’s left over she’s forced to fit too many hobbies into too little time.