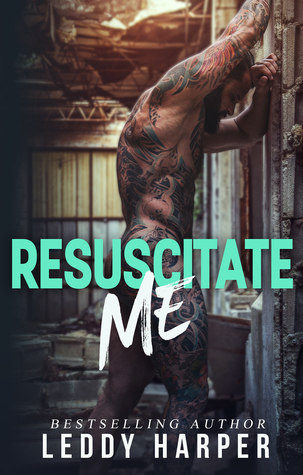 Carter Hastings was only supposed to be a fling,
A summer of fun, excitement, pleasure
And, it was…
Everything.

It’s hard to walk away,
To leave the one man,
Who resuscitates me.

But I did.
He didn’t reciprocate my feelings.
He didn’t love me.
Not now.
Not ever.

This was my second book by this author and while I didn’t fully love it like the first one, I quite enjoyed it. Leddy Harper delivered a fast paced, gripping, great friends to benefits story that held my attention from start to finish. ‘Resuscitate Me’ was angty, heartwarming and also emotional with two engaging main characters I found to be well portrayed.
Kara moved to Florida to live with her sister-in-law and help with her nephew for a while. She’s a kindergarten teacher, so she’s free for the summer and spending some time with her family will help everyone in some way since her brother was deployed a month ago. At the local gym, Cara meets a sexy, tattooed, intriguing man who leaves her hot and bothered every time he opens his mouth. Carter is the owner and from the beginning he makes sure he wants Kara. Kara wants Carter as well, a summer fling may be what she needs right now.

Soon, these two start a hot friends/strangers with benefits relationship. Carter makes sure Kara knows that he’s not looking for a long-time relationship. He’s busy with his gym and other stuff and they live in different states, so a serious relationship is not exactly what he’s looking for. When their time comes to an end, Kara is not ready to give up on Carter, but he doesn’t seem to want something more with her, so she leaves Florida with a broken heart. What neither of them expects is to see each other again very soon. Something happens and Kara will have to decide if Carter is worth fighting for.
For the most part, I enjoyed this one. I liked how the story unfolded and even how Kara and Carter’s relationship progressed, even if they were frustrating as hell at times. Both Kara and Carter were well-developed, likeable….for the most part, but I have to say there were times I wanted to smack them in the head. They were frustrating as f@ck and their crazy dynamic until some point drove me nuts. As much as I like some back and forth between the characters, here this aspect was a little too much…in many ways for my liking. On top of that, the misinterpretation and also miscommunication one time or two annoyed the f@ck out of me. Needless to say, I didn’t fully connect with neither of these two characters…at least not from the start. Overall, I liked both Kara and Carter. Kara’s confidence was almost missing, but for the most part she was a likeable heroine. As for Carter…ugh…he had a quick temper, he was stubborn, argumentative, but also sweet, caring and thoughtful.
I enjoyed the steam factor here. These two were sexy as hell and the chemistry between them was fantastically done, so personally I wouldn’t have minded the story to be a little steamier.

“Look at me,” he ordered again in that rough, no-nonsense tone.

I blinked and focused on his eyes. His pupils had dilated so much they practically swallowed the green. “I can’t…” I whispered in what sounded to me like apologetic shame. “I can’t…”

He finally released the pressure against my chest, but I was unable to catch my breath. Instead of keeping me restrained between his hips and the mirror, he grabbed the back of my thigh and lowered me to the floor. Except, I wasn’t on the floor. I stood on an aerobic step that had to have been at least four inches considering the height advantage it provided me.

Again, he kept me immobilized and mute.

He wrapped one large, rough hand around my jaw. Four thick fingers extended along one side of it. A thumb dug into my cheek with my chin cupped in the web between them. He used his hold on me to tilt my head back until it fell against the mirror behind me.

My voice, my heartbeat, and my ability to breathe—gone.

Silenced by his hungry gaze.

Leddy Harper had to use her imagination often as a child. She grew up the only girl in a house full of boys. At the age of fourteen, she decided to use that imagination and wrote her first book, and never stopped.

She often calls writing her therapy, using it as a way to deal with issues through the eyes of her characters.

She is now a mother of three girls, leaving her husband as the only man in a house full of females.

The decision to publish her first book was made as a way of showing her children to go after whatever it is they want to. Love what you do and do it well. Most importantly Leddy wanted to teach them what it means to overcome their fears.