Is evil learned, or is it birthed into one's soul, like a fallen angel who was previously part of graciousness?

Rhys is decayed, black, and bad. He cut distortion out of his life years before, but he let her live; his only way to gain redemption once more.

As his sinful needs blanket him with dread, he seeks penance from the soul he saw as a second chance.

Is absolution too late for Rhys?

**Warning, dark scenes depicted heavily throughout this novel. Read the Author's disclaimer carefully before proceeding with this title.** 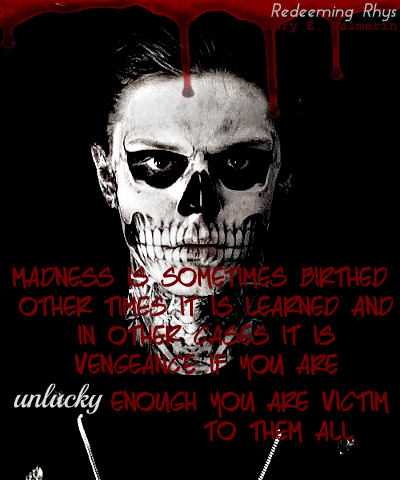 “Redeeming Rhys” was my second book by this author and for sure it won’t by my last. Oh my Gawd…to be in this author’s mind is pure and simple fascinating. ‘The dark’ she portrays in such a twisted way will leave you scared for life, but somehow at the same time will leave you wanting more. Mary E. Palmerin delivered a dark, gory, disturbing story about a man who tries to find redemption in a very unnatural way to say the least.

“One, two, Bad Boy is coming for you. Three, four, Little Girl it’s too late to lock your door. Five six, Bad Boy is about to show you sick. Seven, eight, Bad Boy is gonna filet you like steak. Nine, ten, never see Momma or Daddy again.”

Rhys grew up only with his mother, a woman who loves to drink more than care for her son. Rhys’s life change when her mother brings in their lives a man who will become the new step father and his little girl, Wren. Rhys is constantly beaten by his step-father. His mother knows about it, even the Church knows it, but no one seem to care enough do actually do something for him. Since he was a kid, Rhys grew up with the conviction that he’s a bad boy, that he’s a sinner who needs to be punished, that he has to pay for his sins. The only good thing in Rhys’s life is Wren, the girl he felt in love with, the girl who never said the most important words for him, that he’s not a bad boy.

Years later, Rhys is a serial murder, a truly psychopath who tortures and kills women who look like Wren. He needs absolution from her, so wants to find her; he’s ready to meet her again. He will find her no matter what.

“Those who cast the first sin will always be haunted by the darkness.”

Oh boy…what a twisted tale! This one was disturbing and also terrifying at times. Rhys, the anti-hero of this story was scary as f@ck. His POV was crazy and sooo f@cked-up. At times I couldn’t believe what I was reading. He left me with my mouth hanging open and he made me cringe from start to finish.

“…nothing is ever what it seems. People are always hiding behind something.”

The author did a fantastic job portraying Rhys’s crazy character. What a sick man! He doesn’t give a f@ck about anything, he’s evil and he doesn’t have a conscience.

Being is his head was mind-blowing.

The story fast-paced, which I really enjoyed, graphic and unapologetic and for one reason or another it kept me at the edge of my seat from start to finish. There are some interesting twists I didn’t see them coming and the ending…OMG…so damn smart and intriguing.