“We were perfect together. Until we met.”

I can’t help but smile at the words in her letter. She misses me.

In fifth grade, my teacher set us up with pen pals from a different school. Thinking I was a girl, with a name like Misha, the other teacher paired me up with her student, Ryen. My teacher, believing Ryen was a boy like me, agreed.

It didn’t take long for us to figure out the mistake. And in no time at all, we were arguing about everything. The best take-out pizza. Android vs. iPhone. Whether or not Eminem is the greatest rapper ever…

And that was the start. For the next seven years, it was us.

Her letters are always on black paper with silver writing. Sometimes there’s one a week or three in a day, but I need them. She’s the only one who keeps me on track, talks me down, and accepts everything I am.

We only had three rules. No social media, no phone numbers, no pictures. We had a good thing going. Why ruin it?

Until I run across a photo of a girl online. Name’s Ryen, loves Gallo’s pizza, and worships her iPhone. What are the chances?

I just don’t expect to hate what I find.

He hasn’t written in three months. Something’s wrong. Did he die? Get arrested? Knowing Misha, neither would be a stretch.

Without him around, I’m going crazy. I need to know someone is listening. It’s my own fault. I should’ve gotten his number or picture or something.

He could be gone forever.

Or right under my nose, and I wouldn’t even know it. 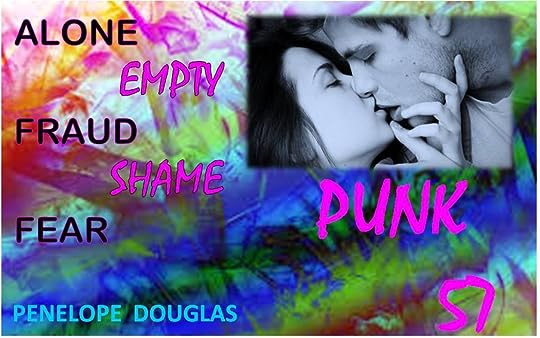 “We were perfect together. Until we met.”

I absolutely loved “Punk 57,” but having said that I found it an incredibly hard story to read. This story really draws attention to the raw and ugly side of high school; the importance of fitting in and being popular even if that means being someone you’re not. This is not the first book I have read by Penelope Douglas and I absolutely love her story telling. She sure knows how to deliver teen angst that packs a punch.

Misha and Ryen have been pen pals since fifth grade. They were paired up due to a misunderstanding. Misha’s teacher thought Ryen was a boy and Ryen’s teacher thought Misha was a girl. They continued to write to each other, even after the school year had finished. Over the years they developed a really close friendship sharing their hopes, dreams, loves, hates and song lyrics.

This close friendship continued on for seven years. They had rules though. No sussing each other out, which includes no facebook searches and no exchanging phone numbers. They didn’t want to ruin the relationship they had.

“They don’t get you and me. I know that’s what you’re afraid of. You’re perfect. I’m never in line. You’re beautiful, and I’m bad, right?”

When Ryen meets Misha, she has no idea who he is and the anticipation of her finding out almost ruined me. How do you forgive your best friend for hiding their true identity from you and for playing you like a fool? It’s a really hard question for me to answer. Clearly I’ve never been in that situation, but I should imagine it would take a great deal of time for love to triumph over hurt, deceit and lies.

If you have not read this story as yet, be warned, Ryen is not a likeable character. She is two completely different people. She is one person (who I would like to believe is the real her) in her letters to Misha and a completely different person in the real world. She appears weak, unable to stand up to her so-called friends. She belittles and picks on the “weaker” kids in order to keep on top of the popularity hierarchy and is a bit nasty. She clearly makes mistakes and is not perfect, but she is real.

“We’re all ugly, Ryen. The only difference is, some hide it and some wear it.”

This story is such an honest telling of the horrendous high school and teenage years, where they’ll do absolutely anything to be accepted and to belong, even if that means being someone they’re not and someone they don’t particularly like very much. My advice with respect to Ryen is to hold off any judgement on her and to power through, because there are reasons for her being the way she is and why it is so important to be on top; to keep the humiliation and embarrassment deflected away from her.

“That was the day I became this. When I started to believe that a hundred people’s fickle adoration was worth more than one person’s love.”

“Punk 57” was unlike anything I have read to date. I went into this story completely blind, not knowing much except what the synopsis divulged and I’m so pleased I did. This story had so many twists and turns; I was surprised by certain events. This is a very poignant, raw, honest, heartbreaking story of love, hate, loss and betrayal. If you love powerful stories full of angst then you should definitely give it a go. It sure was one wild ride.

“It gets better, you are important, and you can’t be replaced. Hang on. You’ll find you’re tribe.”

I haven’t been in a reviewing mood lately.

I have had a lot going on at home and at work…plus I think I have an ear infection that I have been assuming was a headache or something else for a while now.

For some reason – I blame the blonde – I had it in my head that only kids got ear infections.

Being that I had ear infections on the frequent regular as a youngling – and had tubes in my ear twice – you would think this option wold have occurred to me much sooner.

Maybe I’ll get some cool drugs.

Happy Thanksgiving to me.

Anyway, about this book….

I love me Penelope Douglas.

She is on what is becoming a very short list of auto-buy authors for me.

There is just something meaty about her characters and her writing that make her books oh so chomp-able.

This one was different from her other books in that I initially loathed her heroine.

Seriously though, I found a lot of Ryen’s actions to be pretty fucked up.

She was a bully.
And she stood by in silence while bigger bullies did some major bully shit.

Now at NO point was I considering a DNF – The story was still good and I trust PD.

I had a feeling she was going somewhere with all this…and she was.

In the “Note From the Author” section at the end of the book, Douglas says something that I think is worth sharing:

“We romance readers can be very hard on our heroines. We often see ourselves in those roles and compare their decisions to the decisions we would’ve made instead. We tend to judge them more harshly than we do the heroes, because we hold them to the same expectation we hold ourselves.”

My first reaction to this?

I was totally holding this poor 17 year old girl to the standards of my 34 year old mature *snort* self.

And I now realize I do this a lot – in all the books I read.

And I’m sure a lot of you do too. We are all human, after all.

I’m sure we would all act differently as teenagers – care about certain things less and other things more – if we knew then what we know now, as they say, no?

So, to ask Ryen to act as a 17 year old according to how I would act in her position is pretty silly of me.

…how much I have learned…

…and I am amazed at myself for thinking a 17 year old should have the AWESOMENESS that I have fought so hard for.

That I had to suffer for.

That I have started to WRINKLE for.

Bitch needs to EARN that knowledge on her own.

So thanks for the self-awareness check PD.

I am expecting WAAAAAY too much from my heroines *wink wink*

And an attempt at more patience and understand for my future heroines might result in my enjoying even MORE books.

Which is always a win.