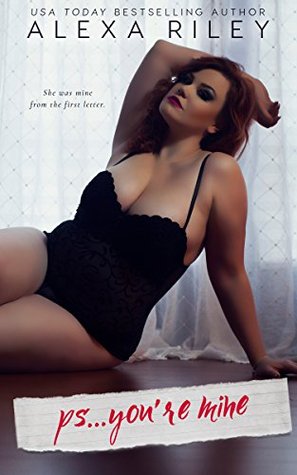 Katie Lovely signs up her class for a project, writing letters to Marines serving overseas, but a calculation error means she has to participate along with the class.

She isn’t prepared for what happens after she gets the first letter.

Sergeant Major Mark Gunner is serving his last tour and looking forward to getting out of the Marines. When he gets a letter that captures his heart, everything suddenly changes.

Their worlds connect and letters flow, creating a love unlike any other.

But when their time is up and the letters stop, will his claim remain?

Warning: This is a super quick, sweet, and dirty read with a small Valentine twist. *whispers* Don’t worry, it’s a happily ever after!

BONUS BOOK: Snow & Mistletoe anther sweet quickie will be at the end of PS… You’re Mine as a bonus book for the first two weeks after release. PS... You’re Mine ends half way through the book.

So I have a confession to make:

It’s pretty huge, so hopefully we can still look each other in the eye after this… It makes me all angry cat.

Now, not to this level of angry cat: But definitely a little more than this: …are pretty much par for the “Val Course” of life.

Don’t get me wrong, I am a very happy person…I just personally adhere to the “realistic life expectations” philosophy.

And it ALL stems from Valentine’s Day.

I hate red. It makes me hungry and…irritable.

I also hate receiving chocolate…because…it makes me hungry, and then irritable…after I eat the entire fucking box and now feel fat and bloated with a side of guilt and shame.

Add in that perhaps the worst memory in my ENTIRE life took place on Valentine’s Day of 1994 – and so all the heart and cupids and chocolates just remind me of THAT awesome moment – I’d rather the whole made up “take-your-chick-to-a-forced-and-overcrowded-dinner” or “force-all-the-kids-to-have-a-popularity-content-masquerading-as-Valentine’s-favors” just be fucking scrapped altogether. But, sadly, since I don’t actually rule the world and can’t rid the Earth of Valentine’s Day – and since I know other people actually enjoy this holiday (which I understand and love for them) – at least I have Alexa Riley to get me through. …my only beef was that it was a little too short on the story this time. But, oh well, I’ll still take it any day.

Plus, if you haven’t read her Christmas story, Snow & Mistletoe, here’s your chance for a two-fer.