At eighteen years old, I was murdered.

I wish my tale ended there.

However, my killer resuscitated me and sold me to the highest bidder, sentencing me to a world worse than Hell.

For the past two years, I've lived a life of torment as a man's property. I suffer in silence and wish for freedom, but I never break.

But then he arrives.

The first stranger since I was killed.

Elder Prest, a thief with a heart as black as his soul, arrives as a guest in our twisted home. He has business with my owner, but his interest lies in me. He pretends not to notice my bruises and hides his knowledge of what I am, but the way he watches me makes me feel more human than possession.

As his eyes tear through my walls and his voice demands answers, he challenges my owner for one night with me.

I've survived two years of torment because I no longer believe in hope, but Elder is the only man who promises me pleasure instead of pain.

Is he my ticket to safety or my ultimate end?

Whoever he is, whatever he wants...I can't say no. 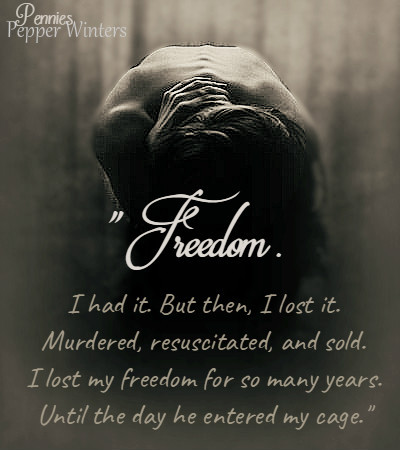 If you are fallowing my reviews, I think you know by now how much I love dark and twisted reads. I love how they keep me at the edge of my seat or how they make my heart race. I love how they push me out of my comfort zone and how most of the time they are so unpredictable. And let me tell you, Mrs. Winters’s first installment in her newest series, entitled ‘Pennies’ was a fantastic dark read. Disturbing, yet captivating, this first installment is cleverly written and it blew me away from the very beginning.

“When does living become the wrong choice and death the right one? When does taking your own life become wiser than letting someone else destroy it?”

Tasmin Blythe had been free for eighteen years, until she was kidnapped and became a slave. She was sold and she became Pimplico, ‘Pim’. Her diabolic master abused her daily in every possible way. She was beaten, tortured, humiliated, starved and raped repeatedly for two years. In these two years she did everything she could to escape, but she never succeeded.

When Pim meets the enigmatic Mr. Prest, a man who is about to do some business with her captor, she is drawn to him. He intrigues her even if she believes, at least at first, that he’s like her master. 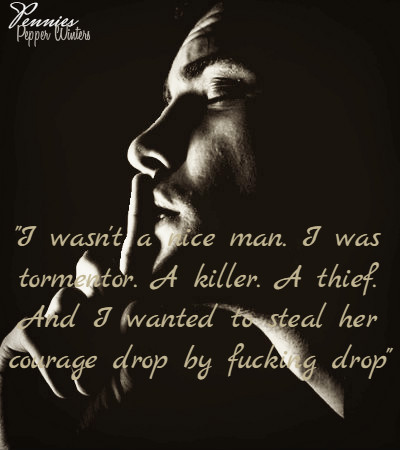 Elder Prest is as dangerous as Pim’s Master if not more dangerous in some way. Elder wants Pimlico…he wants to make her talk, to figure out everything about this sex slave that simply fascinates him. He treats Pimplico differently than her Master, offering her kindness and also some sort of compassion. Elder knows is best for him and also for Pimlico to forget about her, to close the deal with Pim’s Master and move on, but he’s too drawn to her, their strange connection being so strong…to strong.

“I wanted into her damn mind…and if I had to hurt her to achieve that.
I would.”

I really enjoyed this first installment in the series. Before starting this series keep in mind this is not for the faint-hearted. It’s dark, disturbing and to be honest it made me cringe a couple of times. It really kept me at the edge of my seat for one reason or another and what can I say…I loved every minute of it.

Mrs. Winters delivered one of the best sex slave tales I’ve read. The story’s plot was well developed, the characters were complex and well developed and the dark aspect really well mixed with the psychological one. Reading Pimlico’s story was really heartbreaking at times. The sexual and mental abuse were horrible as the story progressed. She was well portrayed as a strong heroine who is willing to do everything to be free again, freedom being the most important thing for someone like her. Pimplico is more than a victim, she’s a survivor.

“She was too much for me.
Too much work, too much temptation, far too much addiction.”

Elder Prest was an intriguing character I’m dying to know more about in the upcoming books in the series. His POV was well done and his character so complex and fascinating. His struggles to accept that he feels more for the unhappy slave were fantastically done. Elder was a very unpredictable character as the story unfolded. Powerful and commanding he has the power to save Pimlico, but Pimlico in order to survive has to remember Elder is not a good man.

Overall, this was a fantastic first installment in the series and I’m looking forward to read the upcoming books in the series!