Romance trades the open road for the high seas in the latest from the author of Focus on Me and Trust the Focus...

Perpetually shy, Quinn Mathers is content to remain in the shadow of his brash best friend Jess Hartman. But before their college graduation, he and Jess have planned one last hurrah: a spring break Caribbean cruise.

And it won’t be just any cruise. On board are members of the reality show Trip League, which follows young twenty-somethings on adventures around the world. Since the show’s beginning, Quinn has been fascinated by J. R. Butler, with his amazing body, warm eyes, and killer grin. Unfortunately, he’s straight—or so the world thinks.

At nineteen, J. R. signed a contract to play straight for the show, and there’s no way to get out of it now. Yet with each passing day, Quinn and J. R. find it harder to keep their hands off each other and to keep out of the camera’s frame. But when the lens finally focuses on them, J. R. must decide if he’s willing to risk his career by admitting his bisexuality, and Quinn must determine if he's bold enough to stand in the spotlight with the man of his dreams... 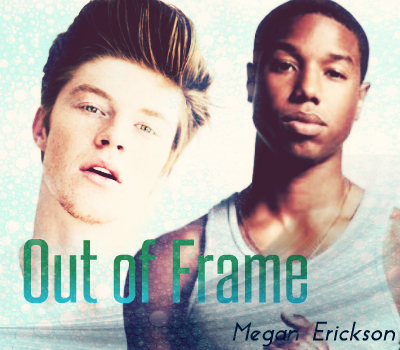 ‘Out of Focus’ is the third installment in Megan Erickson’s m/m series entitled ‘In Focus’ and can be read as a standalone even if you haven’t read the first two books. The first two installments are as awesome as this one, so they are definitely worth checking out. Once again, Megan Erickson delivered a sweet, enjoyable read. A great mix of heart and steam, ‘Out of Focus’ is an entertaining read, written really well with a great message I love to read about.

This third installment in the series fallows the story of Quinn and J.R., two individuals who will help each other finding who they are and finding the strength to be the people they wanted to be all their lives.

“I was going to act like a real, live college student rather than the old man I’d been since birth.
And I couldn’t freaking wait.” – Quinn

Quinn decides to have some fun so he agrees to go on a cruise with his best friend, Jess. Quinn is shy, an introvert and openly gay. He hopes to have a little fun on this cruise, live in the moment and maybe also meet someone. This cruise is like no other cruise because on board are the members of the successful reality show ‘Trip League’. Quinn is excited, not only because he loves the show, but also because he has always been fascinated with J.R. Butler, the straight black boy on the reality TV.

“He didn’t even know I existed. The thought was sobering and comforting all at the same time.”

J.R. signed up for the show two years ago when he was nineteen and when the show had been on for only two seasons. He’d always wanted to be an actor, so at the time he thought the show was the only shot to be known in the industry. While he’s bisexual, he signed on to play the straight guy, so he has been living a lie for a long time. He is tired of it, but he can’t do anything about it since he needs the money. His brother is sick, so he will do anything to help his family with medical bills and everything. He believes his career will be over if everyone finds out the truth about his sexuality, so he has to stay away from boys in the upcoming two months when his contract will be over.

“It wasn’t just the contract; it was my career, it was my life, and I had people depending on me.”

J.R is drawn to Quin from the moment he lays his eyes on him. He likes what he sees – the reddish hair and all the cute freckles, but he also likes his shyness. He knows he has to stay away from the good looking blue eyed boy, but as they get to know each other, staying emotionally detached becomes impossible for both guys.

“I was caught in his blue depths—as blue as the ocean that buoyed this massive ship we were now on—and I was drowning. Good as gone. Drifting to the ocean floor. But instead of struggling against the cement blocks tied around my ankles, all I felt was peace.”

This one was such a sweet, enjoyable read. In some way it was my favorite in the series…at least so far. The storytelling was fantastic as always. Megan always delivers great stories with fun, endearing characters. And here they were exactly that. I loved Quinn and J.R. individually and I loved them together. I liked the fact they were so different from each other and I enjoyed the way the author portrayed them. Quinn’s voice was honest and as the story progresses you will sympathize with him for one reason or another. He was sweet and so thoughtful with the J.R., being an endearing character from start to finish. I liked how he treated him like a ‘normal’ boy and not like a young celebrity.

J.R. was a character I felt deeply for. It must be awful, to say the least to live a lie. He has a big heart willing to make certain sacrifices for his family and I really admired him for that. I liked how the relationship between these two guys progressed. The sweetness and tenderness between them were simply endearing and I have to say I loved the romantic aspect. They were so sweet together. They absolutely warmed my heart!

I have to mention the cast of supporting characters, because they were super awesome. I enjoyed them all, especially Levi, another cast member of the reality TV show and Jess, Quinn’s best friend.

“He kissed me like he couldn’t get enough, like I was the last drink of water on earth and he wanted that cool, crisp liquid before he perished.”

The story is not as steamy as the previous books in the series, but I enjoyed it nonetheless. Unlike the other two installments, ‘Out of Frame’ was told in dual POV, which I loved. I really felt I knew these two boys and I liked how well their backgrounds were developed.

All in all, this was a sweet, sexy and fun tale about family, friendship, finding who you are, taking risks and last but not least finding love.

“Life’s too short to be something other than who you are.”