Bleu MacAllister’s fate lies in the hands of the enemy. Complicated circumstances have rendered her helpless to escape their clutches so she must await rescue by her less than lily-white knight. All is right again when she’s back in the arms of the man she loves until long buried secrets are unearthed. With them, Bleu finally discovers her mother’s killer along with far more than she could possibly imagine. Can she find happiness with a husband who will go to any length to keep her safe, even if it means denying her of the one thing she believes she wants most in this world?

The Sin Trilogy #4
Can Standalone 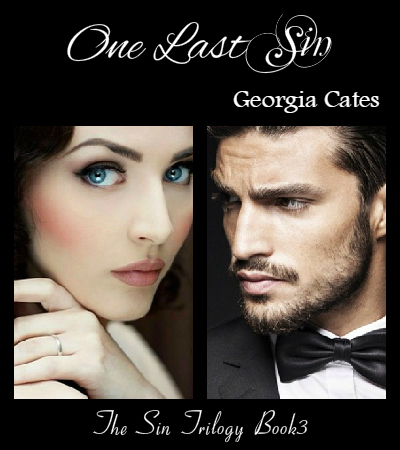 Book2 ends with a big cliffhanger – Bleu is kidnapped by Torrence Grieve, the leader of The Order while Sin is in jail. “One Last Sin” picks right up where “The Next Sin” left off. Bleu tries to stay strong for her babies;she knows in her heart Sin will come for her. She informs Torrence about what really happened when his son died, but The Order’s leader doesn’t care about anything she has to say. When Thane is ready to offer everything he has in exchange for his daughter-in-law, Torrence refuses to return Bleu. He wants revenge no matter what.

“I’m not the forgiving kind but that’s even truer when it comes to someone hurting my family.”

Once free, Sin is ready to go for Bleu. In Bleu’s place he finds a woman who looks nothing like his wife, almost beaten to death and almost raped. Bleu almost lost her babies, so she desperately needs bed rest. Time passes, Bleu and the babies are better and Sin becomes the new leader of The Fellowship. Abram tries again to plan suspicion in the organization against Bleu, but the other members of The Fellowship don’t seem to care about what he has to say or about Bleu’s past. He still thinks Bleu is the enemy and he blames her for the power he has lost in the organization, so he becomes more desperate and aggressive trying to kill her.

Bleu didn’t forget about her mother’s killer. She wants revenge and she’s still obsessed to find the killer. She nearly allowed this revenge to ruin her.

“It’s my one last sin. I’ve spent eighteen years searching for this man. I’ve devoted my life to it. It’s all I’ve lived and breathed since I was seven years old.” 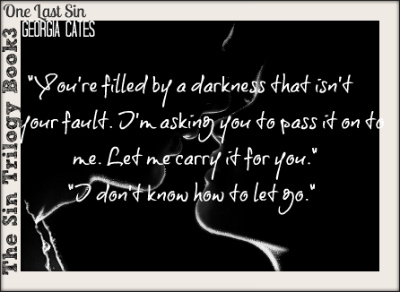 Unfortunately I didn’t enjoy this installment as much I thought. However once again I enjoyed reading about Sin and Bleu as a couple. Sin is the same loving, caring and protective man, especially now when Bleu is pregnant. He will do anything for the woman he loves and for his babies and I loved that about him. But what I loved the most about him is the fact he’s willing to protect his wife from herself and from all the darkness. He wants to be the one who will kill Bleu’s mother killer. He will do anything for her.

Bleu is the same badass, mouthy woman and I enjoyed her character. She’s smart, skillful and she’s taking her new role in The Fellowship very seriously wanting to help the other women in the organization. He loves Sin very much and her babies as well and she’s ready to do anything to protect her loved ones. However, I got annoyed with her a couple of times in this installment.

Sin and Bleu were great together. They love each other very much and I enjoyed their sweet or witty interactions.

What I didn’t like was how rushed the beginning was when Bleu was kidnapped. I really whished this part of the story to be more developed. It goes without saying the suspense and the mystery were not as good as I expected them to be. Also there’s a lot of telling, instead of showing. I also didn’t like how Leith and Lorna’s story was left hanging. Once again everything felt rushed.

Overall, this was a great installment, but in my opinion not as good as the previous ones. 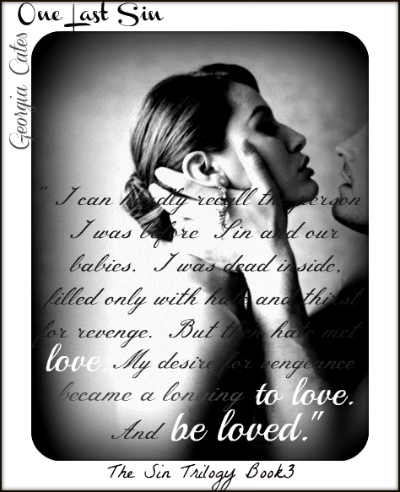