This is the first part of The White House Duet and ends with a cliffhanger. Check out the second and final installment Commander in Chief.

He's won the hearts of millions. But is he willing to lose his?

I met the president’s son when we were both young. Matthew Hamilton was handsome, polished, and intelligent. I’d never met a guy like him.

He promised me that he’d never run for president. I promised that if he did, I’d be by his side.

Three terms later, an invitation to join Matthew Hamilton’s campaign is the most exhilarating opportunity I’ve ever experienced. I'm determined to make a difference; he is determined to win.

Focused on his goal, Matt is steadfast, ruthless, and disarming. All eyes are on him and his popularity is surging. But soon, the next possible president of the United States is possessing me in more ways than one—and despite the risks, I'm helpless to resist.

We're stealing touches, stealing moments, and stealing away at night. But our chemical connection is quickly becoming dangerously combustive, putting not only my heart, but Matt's chance at the presidency on the line.

Winning will take everything. Walking away will be the hardest thing of all.

The White House #1
Part of a Duet

The White House #2
Part of a Duet 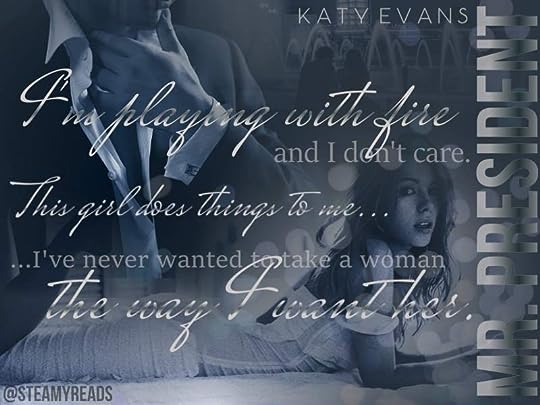 ➦So… This was actually pretty refreshing and “different”, if you will. In preparation for Commander in Chief (second installment) I have decided to read and review this and boy am I glad I did. This kind of forbidden romance is something I really enjoy! It wasn’t the naughty-naughty taboo kind of forbidden love… but. BUT… the circumstances in which these two main characters find themselves certainly make this a pretty angsty read and needless to say I was all torn up over their “predicament”.
➦Charlotte Wells is a daughter of a Senator and she has been very well acquainted with the world of politics since childhood. In fact she has even met the President of the United States when she was 11. And the President brought his son with him. Charlotte is immediately fascinated with Matt and she spends following his career years after their initial meeting. Until… they meet again. dun dun dun. See where I’m going with this?

➦Matt Hamilton and Charlotte Wells meet years later when Matt announces that he is going to run for president. He sees her at one of the functions and invites her to be part of his campaign team. She agrees. The rest, as they say, is history.
➦But is Matt prepared to fall in love? If he is going to dedicate himself to the United States there is no time for him to have wife or a family. He knows how demanding his job would be and he refuses to put his loved ones through missing him while he is constantly working.

➦Matt is definitely a very likable and lickable hero. 😀 I’ve been on an asshole male/damaged heros rampage lately and it was actually nice to read about a “good guy” for a change.

➦In fact, both of the main characters were so likable that I couldn’t help but root for them. The sexual chemistry was there but the whole book was pretty demure as far as sexy times. There was a lot of anticipating “foreplay” with a couple of fade to black scenes. But this book certainly didn’t lack in romance and that suited me just fine.

➦This ends with a cliffy and I can’t wait to read the second installment. I definitely recommend this book to anyone who loves forbidden love stories, sweet and likable heros and heroines and super romantic reads with a bit of politics infused to make it quite unique.

‘Mr. President’ was definitely my favorite book by this author. Katy Evans delivered an intriguing political romance that sucked me in from the very first chapter. Katy’s effortless storytelling made me read this first installment in the series in one sitting. As you may know, I’m not a big fan of political romance, mainly because, most of the time, the political aspect is way too developed for my liking and more developed than the romantic aspect. Katy balanced these two aspects here, I’m pretty sure, without even trying, delivering an angsty, enthralling read with some forbidden elements that made this read to be very gripping and well written in my opinion.

“He is the man his father groomed and that a nation has waited for.”

Matthew Hamilton is the darling of the media. He’s successful, handsome, has been voted “The Sexy Man Alive” and “Most Successful Businessman”. The son of an ex US President, Matt knows everything about politics and everything about all the sacrifices you have to make in order to be a good politician. When he decides to run for president, Matt makes Charlotte Wells an offer to join his campaign.

Charlotte knows everything that is to know about political scene in D.C. since her father was a Senator for several years. When she was 11 years old she met Matt Hamilton, back then the President’s son, crushing on him from the start for several years, later admiring him and fallowing his life and career. She’s more than thrilled to join Matt’s campaign staff, truly believing he’s the best candidate.

During the campaign, Matt and Charlotte start spending a lot of time together, they slowly becoming some sort of friends, but their friendship blossoms into something more, something forbidden, yet addictive for both of them. Both Matt and Charlotte know they can’t start a relationship if they want for Matt to win the presidential election, but what happens when they realize they can’t say away from each other and when the attraction becomes too much?

“What we’re doing is risky, but how can it be wrong when it feels so right?”

I really enjoyed this one! Not only this first installment it was well written, but it was thrilling from start to finish and overall, a great blend of sexiness and angst. The pace of the story was fantastic and the plot well developed, interesting and so gripping. As I previously mentioned, the author mixed the romantic and the political aspect pretty damn well. The story wasn’t boring for one minute and it actually kept me a little a at the edge of my seat. Personally, I wouldn’t have minded more angst and/or more drama. Just saying…

“Have you ever loved someone so much it hurt like hell? I hadn’t until now.”

I loved the fact the story was written in dual POV. Both main characters were vividly portrayed, both of them being well developed, genuine and endearing. Matt was a fantastic character. Larger than life, chiseled, charming and even a little intimidating at times, our hero won me over from the moment he was introduced. I was bewitched by him, completely overwhelmed by his presence from the start. I loved the way he was with Charlotte as the story progressed. His confidence in her and his consideration were fantastic and the way he made her feel protected and cherished at times was simply heart-warming.

“She grounds me. She obsesses me. She fuels me.”

Charlotte was a great heroine. Smart, loyal, determined to prove herself, she was mature for her age in my opinion, which I really enjoyed. I loved how she stood up for herself and how hard-working she was. I wouldn’t have minded for her to be a little bolder, but overall I think she was a great heroine.

I really liked the way these two characters’ relationship started and progressed. These two were fantastic together, their connection palpable and their chemistry amazing as the story unfolded. Katy did a wonderful job with this aspect, which btw was my favorite aspect of the story. I couldn’t get enough of these two! The intensity, the passion, the sexual tension between them were so well done and the stolen moments, the stolen touches between them at times made me root for them from the beginning.

All in all, ‘Mr. President’ was a fantastic, intriguing, sexy read I recommend if you want to read a forbidden political romance! Can’t wait to read the next installment!

“We’re a perfect couple, in the most imperfect situation.”