I met Bianca in an elevator.
She was on her way to interview me when we got stuck.
The beautiful, raven-haired reporter assumed I was a delivery guy because of the way I was dressed.
She had no clue I was really Dex Truitt, the wealthy, successful businessman she’d dubbed “Mister Moneybags”—her afternoon appointment.
Bianca told me how much she hated Dex’s type—snobby, over educated, silver- spooned men who didn't appreciate the simple things in life.
So, after the elevator finally started moving again, I cancelled the interview and let her believe I was someone I wasn’t—a bike messenger named Jay. I loved the way she looked at the fake me and didn't want it to end.
I began dating her as “Jay”—all the while letting her interview the real me over email.
I didn’t expect that our chemistry online would be just as hot.
I didn’t expect the mess I’d gotten myself into.
I didn’t expect that Jay and Dex would fall in love with her.
And she was falling for two men.
Only, both men were me.
And when she found out, we were both going to lose her.
Nothing could have prepared me for that day. And I certainly wasn't prepared for what came after.
All good things must come to an end, right?
Except our ending was one I didn't see coming.

“I’ve never felt connected to anyone like I do to you. It feels almost chemical. We haven’t known each other for that long, but in some ways, it seems like a hundred years.” 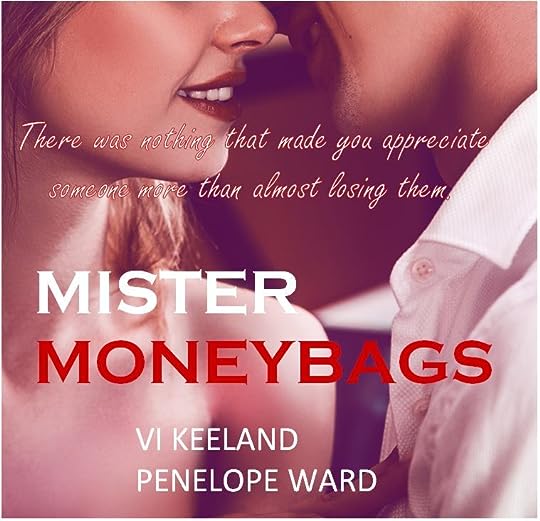 Vi Keeland and Penelope Ward have done it again with yet another amazing collaboration with ‘Mister Moneybags.’ I absolutely love when these two authors work together and I always anticipate highly when one of their releases is close to hand. ‘Mister Moneybags’ did not disappoint, it was fun, sexy and somewhat more emotional than I was expecting, but I love being surprised by stories. Bianca and Dex drew me in from the very beginning, I loved these characters and I just could not get enough of them.

Bianca and Dex meet in an elevator. That whole scene was absolutely hilarious and I can’t remember the last scene in a book where I laughed so hard that I snorted. The witty banter between the two characters was classic and I instantly knew I was going to fall in love with them. I certainly wouldn’t object to getting stuck in an elevator with Dex Truitt.

“I also whittle.”
“Whittle?”
“Yes, whittle. You know, the ancient form of woodcarving. I carve various things from wood.”

“What the fuck? Hiking or distilling couldn’t have popped into my head first? I didn’t know the first thing about wood. Well not that type of wood anyway.”

Bianca is a journalist for a business magazine called the Financial Times and was on her way to the top floor to interview CEO, Dexter Truitt, AKA Mister Moneybags; that is until the elevator abruptly stops. While stuck in the elevator Bianca meets a beautiful stranger, who is none other than Mister Moneybags himself.

Dex soon becomes aware of the fact that Bianca does not like the elusive CEO and has a preconceived idea of who Dex is. Due to this, Dex decides to keep his identity a secret from Bianca and not divulge who he actually is. Dex introduces himself to Bianca as Jay Reed, bike messenger. He created this alter ego as a way to find out the truth behind Bianca’s preconceived beliefs about him and her hatred for rich and powerful men.

“This lying thing was really beginning to come naturally now. It wasn’t unlike criminal behaviour – starting out with petty crimes – one day you’re whacking a gumball machine on its side to make a plastic container with a broken ring pop out, and before you know it, you’re robbing a bank at gunpoint.”

The interview that was to take place between Bianca and Dex never happens. Dex contacts his secretary to have her keep Bianca waiting for forty five minutes and then to cancel the interview once she has waited for that time. Dexter however sends Bianca a message to reschedule the interview at eleven o’clock at night via email. Bianca agrees and they spend several nights emailing back and forth and hence Bianca starts to develop feelings for not only Jay, but also for Dex.

After digging himself even deeper with all the lies Dex has told Bianca, he becomes extremely remorseful and knows he has no choice but to come clean and explain the reasons for creating his alter ego. He knows there is a very good chance that he will lose Bianca forever considering she has no time for liars.

“My hole I had dug for myself had just bottomed out, and I had no idea how I was going to get out unscathed.”

I absolutely loved this story from start to finish. Dex was the perfect hero for me. He was sweet, sexy, hilarious and had a deeper side to him. He absolutely stole my heart with his attempts to win Bianca. If you love strong heroines who have no problem speaking their mind and calling people out on their lies, then you will absolutely adore Bianca. Without going into too much detail, her revenge for Dex/Jay was absolutely priceless. If you’re anything like me and a huge fan of Vi Keeland and Penelope Ward’s talented work then you will love this story. I highly recommend it.

➦This, unfortunately, wasn’t my favorite book by this author duo. I will say that I thoroughly enjoyed the first half of the book. It was sort of ridiculous but at the same time gripping and funny. The second part of this book was so… sooo… dramatic and gave off some strong soap opera vibes. And that’s just never the sort of thing I enjoy in books.

➦Mister Moneybags is a super rich and super successful, sex on a stick dude, who has been hiding from the public eye and nobody knows what he looks like. Well, he finally agrees to an in-person interview with a certain sexy journalist. It just so happens that on the way to the interview these two get stuck in an elevator together.

➦I really enjoyed the funny/sad (depending on how you look at it) situation the hero finds himself in. He falls for the heroine and realizes he has to come clean. How is he going to do it? It was hilarious being in his head, the dude was jealous of his made-up persona.

➦The book takes a completely unexpected turn in the second half. Actually, scratch that. I probably shouldn’t say it was COMPLETELY unexpected, because, well, I have seen this in some other books by these authors.

➦I mainly enjoy reading about the relationship between two people, their interactions, the whole “falling in love” process. Family drama and life stories of secondary characters is not something I care reading about. On top of everything, the situation described was so far fetched that I just became completely detached from the story. Again, just a personal opinion here, it might float your boat just fine!

Penelope Ward is a New York Times, USA Today, and #1 Wall Street Journal Bestselling author of thirteen novels. With over a million books sold, her titles have placed on the New York Times Bestseller list fifteen times. She is the proud mother of a beautiful 12-year-old girl with autism (the inspiration for the character Callie in Gemini) and a 10-year-old boy. Penelope, her husband, and kids reside in Rhode Island.