I’m an outlaw. I don’t fall in love and I sure as fuck don't run... Until Jillian McAdams.
I fell for a law abiding Sheriff, breaking my vows to my own club, and turning her against her family of blue.
An outlaw and a sheriff, it can only end in one way… Mayhem.
Now we both have to pay the ultimate price for betraying our families.
I swore to kill my brother, his allegiance sworn to another club, if I ever saw him again.
Yet here I am running to him in hopes to save Jillian’s life…
We both will have to rewrite the rules we know to stay alive.
Even if it means we lose everything we had in doing so… 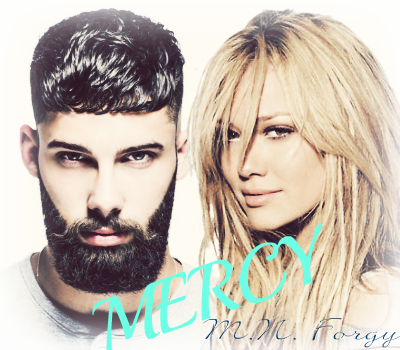 ‘Mercy’ is the second and last book in M.N. Forgy’s ‘Sin City Outlaws’ series and picks up right where the first book ended. As the first installment, this one is filled with action, intrigue, suspense and last but not least steam. M.N. Forgy delivered a pretty great conclusion to Zeek and Jillian’s story. I have to say I’ve been anxiously awaiting for this second book in the series since the ending of the first book left me nervous and with my mouth hanging open.

“Mercy is for the weak and because of the world we live in there is no room for weakness. Only the strong fucking survive.”

Jillian never planned to fall for the notorious violent MC President named Zeek. She tried to stay away from him as much as Zeek tried to remind himself that getting involved in a romantic relationship with a rookie with be suicide. The inevitable happened they falling for each other, but every action has consequences.

“He and I may not be good for one another, may be different from every aspect, but it doesn’t fade what I feel for him. If anything, it fuels it.”

Jillian was set up for the murder of her father. She still can’t comprehend some truths she found out. On top of that she has mixed feelings for Zeek. She knows she should hate him, but she can’t deny how much she loves the man who is so forbidden for her. Zeek would do anything for the woman he loves, even abandon his Club and run away with her. He wants her free and save no matter what. Planning to save Jillian and also himself, he is ready to ask his estranged brother for help. Everything gets complicated, so Zeek and Jillian have to stay strong in order to survive.

“Depending on who you ask, they say love can bring the worst or best out in a person.”

This second installment was as action-packed as the first one, but steamier which obviously I enjoyed. I enjoyed the intrigue and the suspense. There were times when the story really kept me at the edge of my seat. Once again, Zeek was hot and dangerous. I really enjoyed his character. I loved his determination to protect Jillian no matter what and the way he loved her. Jillian was sweet and gentle and as likeable as our hero.

“The feel of her beating heart against mine, the meaning of her arms pulling me in close, it all means something. It breaks barriers, it broke mine. It made me fade from numb to something more human.”

Their connection was done even better than in the previous installment. I really liked these two together and I loved their sexy times. Intense or sweet, I enjoyed every single one of them. The passion between these two was combustible at times. Loved it!

I wouldn’t have minded the story to be longer and some aspects of the story to be more developed – like the relationship between Zeek and his brother. Overall this was a good read and I’m looking forward to read other books from this author.