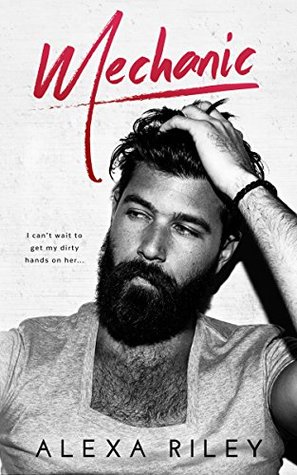 Everything was fine until that innocent little rich girl walked into my garage. Since the second I laid my eyes on her, all I've wanted to do is get my dirty hands on her pure body.

There's one minor obstacle standing in my way, but I've got a plan. All I've got to do is claim her, and she’ll be mine forever.

Warning: This book is over-the-top, insta-love. There's nothing but steamy scenes, babies trying to be made, and an obsessed bearded alpha hero claiming a virgin who will be his forever. If you want it hot and dirty, this is it!

*whispers* There's a sweet smutty surprise at the end!

As I’ve said before, Alexa Riley is my go-to smut author.

Like the book equivalent of a morning quickie…Hard, fast, and dirty – while sometimes lacking…finesse, all parties are still left satisfied, amiright?

Anysmut, this book once again deals with the whole “breeding” thing, which is apparently a thing, but I don’t care.

Sure it’s kinda creepy when brought into the Dirty Talk repertoire, but whatevs, I dig it.

But, with that said, this was not my favorite Alexa Riley.

Don’t get me wrong, I enjoyed it well enough.

However, the whole initial interaction between the H and the h when he tells her he won’t accept any other form of payment but a piece o’ pussy in exchange for repairing her car?…

…left me feeling a little skeeved out.

Not to THIS level of skeeved out or anything, but still…the ick factor did rear it’s ugly head there for a hot second.

That, among a few other things, just left me unable to “connect” with this one they way I have with a lot of her other ones. But like, I’ve said before, we don’t read Alexa Riley for War and Peace style shenanigans.

Regardless, this was a hot and short read and I enjoyed it well enough.