It started off as a battle of wits. Me: the ordinary girl with a big mouth against Him: the sexy bastard with a big...ego.

I thought I’d hit the jackpot when I was upgraded to first class on my flight to London.

That is until HE sat next to me. Gabriel Scott: handsome as sin, cold as ice. Nothing and no one gets to him. Ever. He’s a legend in his own right, the manager of the biggest rock band in the world, and an arrogant ass who looks down his nose at me.

If I accept his proposal, I leave myself open to falling for the one man I can’t manage. But I’m tempted to say yes. Because the real man beneath those perfect suits and that cool façade just might be the best thing that’s ever happened to me. And I just might be the only one who can melt the ice around his heart. 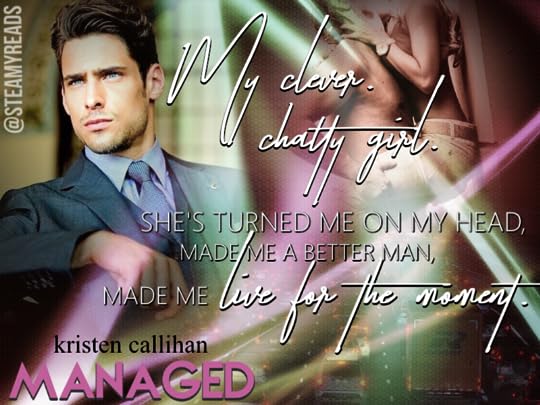 He isn’t cold or unfeeling. He’s just hiding. I want that unleashed – all that strength and simmering emotion he holds beneath the surface.

➦Okay. So. I’m delighted to read a story about a hot arrogant man in a suit any day. Gabriel here also has an accent so… naturally, le #swoon.

➦This series revolves around the band Kill John and it’s members. Gabriel is one of the guys but he isn’t a musician – he’s the band manager. And although he thinks of the band as his family he still keeps everyone at arm’s length. WHY?Interesting question, which undoubtedly gets answered in the book. :p

➦The story begins with Gabriel flying first class – his favorite form of transportation. NOT. He might be just a teeny bit afraid of flying. And who does he get stuck with on the flight? Right. Sophie is very chatty and she immediately starts breaking down Gabriel’s walls even without him realizing it. Will they keep in touch after the flight?

➦I loved pretty much everything about the story. It was a friends first type of trope and I always enjoy those. Following the experiences of these two was absolutely delightful and I enjoyed every second of it.

➦The anticipation was killing me – the sexual tension was off the charts. This was definitely steamy but also gave me all the feels. A bit of angst at the end certainly worked for me just fine.

➦I definitely recommend this to anyone who loves contemporary romances with misunderstood heroes, quirky heroines and friends first storylines.

In all this time, I had yet to see Gabriel without a shirt. He hides his body like a pious Victorian, never letting me see anything other than him fully dressed and polished. Now I know why. Had he let me get a glimpse, I might never have been able to form a coherent thought around him.

This man’s chest is a work of art. It’s every fantasy I’ve had about a man’s body made real. I don’t even know how that’s possible, but I’m not about to complain. God, he looks touchable. Olive skin, tight little brownish nipples, a smattering of dark chest hair over the most incredibly honed—

“You’re staring.” His tone is dry.

“Yes, I am.” I drag my eyes up and find his expression bemused.

A thick brow lifts. I try to mimic the look and fail when both of my brows lift as one. His lips twitch in amusement.

He shifts his weight, causing his abs to clench. Good Lord. He’s not some overdeveloped gym worshiper, just solid and strong, that perfect balance between defined musculature and healthy male—

“You think it’s easy looking away from all this splendor?” I ask his belly button, licking my lips when he huffs out a laugh and just a little bit more of his lower abs are revealed, slanting toward the thick bulge of his cock, which is lamentably hidden behind his slacks.

“You’re impossible,” he mutters, though there is humor in his voice. He strolls farther into the room and then practically kills me when he sits in one of the low-slung armchairs. That body, sprawled out on display, those thick, long thighs braced as if to take me in his lap—it’s too much.

I want to straddle him and lick my way from the hollow of his throat to the tip of his cock.

He eyes me as if he knows what I’m thinking, and the air thickens. So many things we left unsaid. I’m remembering his lips now, surprisingly soft, but strong with purpose.

From the way his lids lower, I wonder if he’s remembering things as well. But he doesn’t move. Tension glides over his body and snakes around the room. I feel it in my throat and down my spine. We’re closing up again, retreating.

Slowly, I toe off my shoes and set my gear down, never breaking eye contact. “I was being completely honest,” I tell him. “I see you like this and I want to stare forever.”

He snorts, shaking his head even as he rests his temple on his knuckles. “What do you mean ‘like this’?”

He tenses. It does lovely things to that chest. I focus on his face, mainly to maintain some semblance of decorum.

“You think this is me undone?” he asks quietly.

“It’s a start.” I reach for my camera bag. “Will you let me photograph you?”

There is safety to be found with the camera between us. A way for both of us to hide until we’re comfortable around each other again.

“You sound surprised.” Holding my camera, I sit in the sofa opposite him. “Don’t tell me no one has asked to take your picture before.”

You’re my story. You always were.

His shrewd gaze pins me. “Why do you want this?”

So I can have a bit of you forever. “Pictures capture moments in time. I want this one—when you finally let me see a sliver of the man behind the clothes.”

His nostrils flare on an indrawn breath, and he slowly lets it out. When he speaks, his voice is a rasp. “Take the pictures.”

Kristen Callihan is an author because there is nothing else she’d rather be. She is a three-time RITA nominee and winner of two RT Reviewer’s Choice awards. Her novels have garnered starred reviews from Publisher’s Weekly and the Library Journal, as well as being awarded top picks by many reviewers. Her debut book FIRELIGHT received RT Magazine’s Seal of Excellence, was named a best book of the year by Library Journal , best book of Spring 2012 by Publisher’s Weekly, and was named the best romance book of 2012 by ALA RUSA. When she is not writing, she is reading.