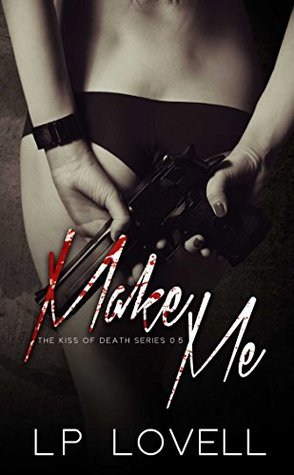 0.5 in The Kiss of Death Series. Prequel novella to Kill Me.

At thirteen years old I was sold, doomed to become a sex slave.
Nicholai Ivanov, boss of the Russian Bratva, gave me the ultimate gift. He saved me from a fate worse than death. He promised to make me strong, because only the strong survive, and the weak die, forgotten and inconsequential.

I now live in a world of blood and violence, where humanity itself is a weakness. My life is not a battle of bad and good, but bad and worse. This is kill or be killed, survival of the fittest.

Make me or break me?

Kiss of Death #1
Part of a Series

Kiss of Death #2
Part of a Series

‘Make Me’ is the prequel to ‘Kill Me’ and while it’s not a must, I highly recommend it, not only because Una’s background is fantastically done, but also because for a novella it was really well written. For me ‘Make Me’ was intriguing and to be honest it held me at the edge of my seat like no other novella I’ve read so far. Needless to say, L.P. Lovell impressed me again. This story was fast-paced, engaging filled with action, suspense and emotion and it definitely left me wanting more.

“This life is a battle of bad and worse. There is no room for good, only survival. Only strength. Only what must be done.”

Una stopped being protected and loved becoming the protective at the tender age of eight, when her parents died in an accident and she and her younger sister were moved in a orphanage. Forced by circumstances, Una learned the hard way to survive. Her life changes completely when she’s 14, when a dangerous man gives her what no one gave her ever in a long time. Time passes and Una becomes stronger, wiser in some way, a bada$$ young woman who will ultimately become the Kiss of Death.

If you already read ‘Kill Me’ and want to know what happened to Una when she was just a young girl for her to become so cold and emotionless, then you don’t want to miss this one. L.P. Lovell did a great job with this novella. Una’s portrayal was fantastically done. Her past was gradually revealed and really broke my heart. If when she was younger Una was vulnerable, as life goes on, Una becomes cold, calculated, deadly. Needless to say, if you like strong heroines, then you will like Una, cause she was exactly that.

I really enjoyed this one and I wouldn’t have minded Una’s story to be a little longer. Overall, ‘Make Me’ was an entertaining, awesome read and a really great addition to the series.

“The numbness that ensues is peaceful, easy. I embrace the cold detachment with open arms, revelling in the darkness. After all, don’t monsters live in the dark?”

Lauren Lovell is an indie author from England.

She suffers from a total lack of brain to mouth filter and is the friend you have to explain before you introduce her to anyone, and apologise for afterwards.

Lauren is a self-confessed shameless pervert, who may be suffering from slight peen envy.

LP loves to hear from readers so please get in touch.