When I was eighteen, I stood at the precipice of stardom. I had the record deal. And the tour to back it up. But I succumbed to the pressure of that life. The dark side.

Now, I skate on the fringe. My brother is the genius guitarist for the band Caged, and I’m the one who helped make that happen. I’m happy to run my bars and my land development company.

And then I meet her—Taryn Ayers—the music manager behind the three biggest bands in the country. She doesn’t know I’m Cam’s older brother. Or that I’ve got a secret that makes her world and mine fundamentally incompatible.
Problem is, I want to know Taryn.

But do I want her to know me?

➦What? You want constructive criticism? Ok, then. I’ll just say this. My absolute favorite thing about Jayne’s writing is the way she portrays her characters. They aren’t just “good” or “bad,” they are both, with traits that make them feel very real. Even if she describes a character that comes off as selfish or controlling, you can’t help but relate and in some way understand where they are coming from. Those traits don’t make them bad, they simply make them human.

➦And while “famous rockstar falls for a girl next door” trope will never cease to be my favorite, the non-cookie cutter themes in Jayne’s last two books are the ones that will stay in my mind for a while. And that’s what I love about books that don’t just make you feel good. They pack a punch and they give you characters that grip your heart and stay with you.

➦And by all means, if you want a lighthearted rockstar read with a bunch of laughs, read the first two books in this series. Because Jayne can do those too. And now I will leave you with two words.
LOOOOOOOOOGAN NEEEEEEXT!

“You’re the smooth surface to all my jagged edges”

This has been such a wonderful surprise!! I’ve read reviews on the previous books in this series and couldn’t wait to read this. So getting an ARC for this book, I was giddy, yet nervous, after all its a new author to me!!

Seriously, what the heck was I even worried about. This book was simply amazing to me. I loved it!! The writing was fabulous, it sucked me in from the beginning. A book that holds me captive is a winner in my book world. Now with saying that, I will not lie. This book hurt too. I wanted to throw my kindle, I lost my finger nails. It’s angsty as hell. Up and down. Down and up. And it doesn’t stop until the end. Believe me, ask my kids, I couldn’t be interrupted.

I enjoyed the character development in this book. This author really puts you through getting to know these characters.
Chase Noble. You. Are. Stunning. Astounding. Breathtaking. And yes, you broke me a bit too. This man is strong and he is weak. Inside he is gentle and a bit broken but he’s addicted to one drug that rehab will not help him with.
On the outside, yeah, he’s umm, yeah…. 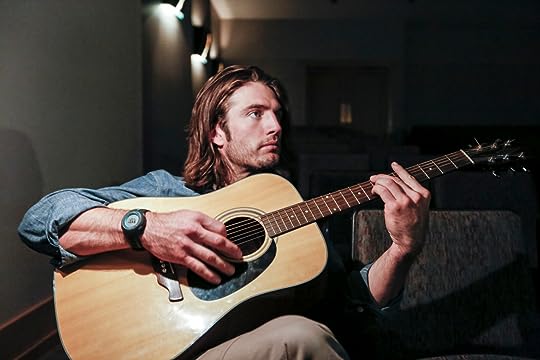 Taryn Ayers. Strong, broken, business driven. I felt she relied a little to bit too much on business, yet at the same time, I think she fell back on her business to be her life as she had literally lost everything else. Until one thing changed it all…. She is full of passion and love, waiting to give it to the right person. 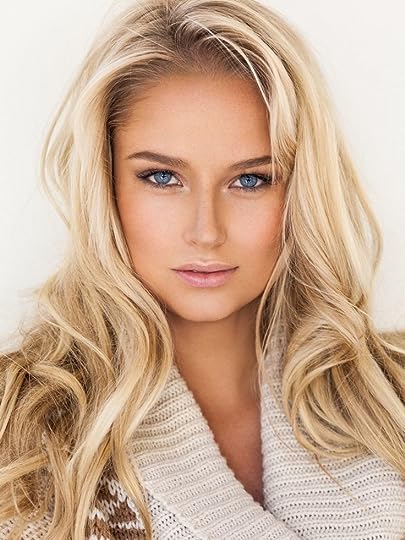 If you enjoy broken rockstars and love, I can’t recommend this one enough. I will definitely be stalking Mrs. Frost for her next release in this series and can only keep my fingers crossed as to who it’ll be on and what she’ll do with them!!!!!!???? 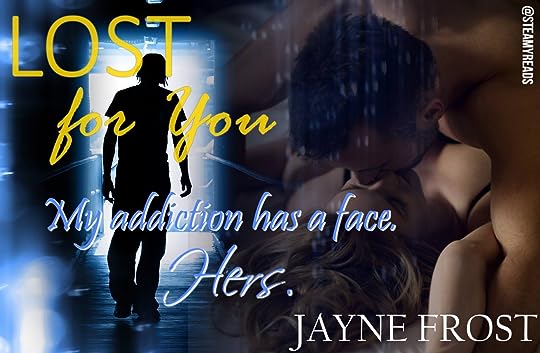 “Our eyes met, and for a moment I felt a connection so deep it took my breath away.”

One of the things I love most about reading and reviewing books are the never before read authors you discover. This is my first story by Jayne Frost and I really enjoyed it. I haven’t had the privilege of reading the other books in the Sixth Street Bands series as of yet, but rest assured I will correct that in the very near future. When you discover new authors it can sometimes be hit or miss, but not in this case. Jayne Frost can seriously write, with her carefully crafted plot lines and well developed characters, she sucked me in.

Our hero Chase, is dark, broken and real. He’s been to hell and back, but lives to tell his story, which is no easy feat by any means. He’s fragile, but then I felt him to be so strong on the other hand and when you’ve moved to the dark side it is so hard to come out the other end and finally find the light at the end of a dark tunnel.

“Pain had been my constant companion for five years. An unwelcome guest. And I didn’t feel it as acutely when I was with Chase. But I couldn’t tell him that. That probably crossed some kind of friendship boundary.”

Taryn is strong, so strong. I can’t even imagine going through what this woman has gone through and come out the other side unscathed; the strength it must take to get through your worst nightmare and have the ability to pick yourself up and carry on is simply unfathomable to me.

Lost for You is, after all said and done, a rockstar romance and we all know rockstars live by the creed of sex, drugs and rock n roll. The struggles with drugs and addiction felt so real, I read it feeling waves of depression, but then enlightenment as well, a real roller coaster. Addiction is a really dark cloud that hangs over the head of many a rockstar, especially so during the prime of their careers. This story was raw, gritty, real and I felt every emotion.

“I brushed a lock of hair out of his eyes, and when he smiled, I knew – he was going to kill me. Break my heart and leave it in a million pieces when this all faded away.”

It was not all doom and gloom, though I do love my emotional reads, so sometimes I can focus on that aspect. However, there were also hot, sexy and steamy scenes to help balance out the emotion, which had me hoping this couple would rise above the hurt and pain of their past and find their HEA.

I really enjoyed this story and it kept me invested from the start as I absorbed all the pain, heartbreak, emotion and love. If you adore your angsty, friends-to-lovers rockstar romances then I suggest you check this one out, you won’t be sorry 🙂

A faint ringtone roused me, echoing off the walls in the loft. Indistinct. Generic. I pulled the blanket to my chin.

“Phone, babe,” Beckett grumbled, his voice muffled by the pillow.

Groaning, I patted the nightstand, searching for the source of my annoyance. When I came up empty, I cracked one eye open and spotted my jeans next to the bed, my phone hanging out of the back pocket.

Teetering on the edge of the mattress, I snatched up the device and issued a groggy “Hello.”

“May I speak to Taryn Ayers?”

The woman’s voice, all business, filtered through the hum of conversation in the background.

As I settled against the pillows, the room spun from too much wine at dinner and too much Beckett for dessert. “This is she.”

Beckett draped an arm around my waist, his thumb skimming my ribs. Smiling, I rolled over and brushed a thick lock of hair from his face. His lips quirked but he didn’t move.

The thick fog of sleep receded, leaving me fully awake. “Who?”

Beckett’s lids fluttered open and his cobalt eyes found mine.

“Miss Ayers, we got your name from Preferred Motor Coach. There’s been an accident outside Fredericksburg involving a tour bus. Your name was listed as the point of contact.”

Disentangling myself from the sheet, I sat up and scooted to the edge of the bed, my legs dangling over the side. “I’m sorry … an accident? What kind of accident?”

“A semi-truck crossed the median and hit the bus at a high rate of speed. The survi … the injured parties are being transported to Brackenridge Hospital via Care Flight.”

Beckett’s fingers brushed the base of my spine. “What is it, babe?”

When I didn’t answer, his footfalls sounded on the hardwood. And then he was in front of me, moonlight from the floor to ceiling window framing his broad shoulders and illuminating the tips of his dark locks.

He needs a haircut.

Shifting my attention back to the faceless woman on the other end of the line, I cleared my throat. “But everyone’s all right, though?”

After an eternity, she started to speak, but I couldn’t process what she said. Everything after “I’m sorry” faded to white noise. And then, like a crash of thunder, her last words exploded in my head.

“… officers’ on the scene reported two survivors and three fatalities at the crash site.”

In front of me, Beckett crouched, his lips moving soundlessly as a tiny fissure formed in my chest. And then something shattered deep inside and the phone slipped from my numb fingers.

Beckett scooped up the device and began to speak, but I couldn’t hear anything but the four-word refrain echoing in my head.

When I didn’t look up, he slid his fingers into my hair and gently tipped my chin, forcing me to meet his gaze. “Baby … you’ve got to get dressed now.”

Tears rolled down his cheeks, and I tracked a tiny rivulet with my finger. “Why?”

Catching my hand, the crease in his brow deepened. “Why … I don’t …” Clumsy fingers circled my biceps. “Here … let me help you.”

Wobbling to my feet, I yanked free from his hold. “Why?”

Beckett scrubbed a hand over his face. “Babe, I don’t know why.” He snagged my jeans from the floor and shoved them at me. “Please, just get dressed. We have to go to the hospital.”

A calm washed over me. Sweet relief. “It’s a mistake.”

“Listen to me!” Clutching his arm, my nails sank deep into his skin. “Don’t you see? Rhenn, Tori, Paige, and Miles.” Holding up a finger for every name I ticked off, I wiggled my digits. “That’s four. It’s a mistake.”

Beckett crushed me to his chest. “Babe, it’s not a mistake. We have to go now. Please.”

Confused, I peered up at him, the placid smile wobbling on my lips. “But I just told you …”

Taking my face between his palms, he rested his forehead against mine, anchoring us together. “Taryn, listen to me. There were five people on the bus. You didn’t count the driver.”