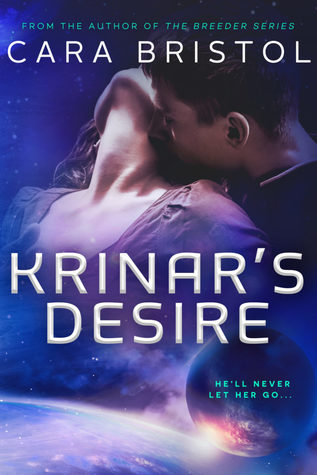 Pretending she works for the mayor’s office, investigative journalist Caitlyn Meadows goes undercover at a K company intending to expose the Krinar and show the world the dark side of the powerful, mesmerizing aliens who have invaded Earth.

Arak, a Krinar, prefers to avoid the weak, technologically backward humans, but the moment he meets Caitlyn, he wants her. Getting her to submit to his dark desires consumes him, and he sets out to seduce her.

Falling under Arak’s spell, Caitlyn begins to doubt her beliefs and her mission. She doesn’t know whom to trust—her colleagues at Viral News who warn she’s becoming too close to a dangerous alien—or her own heart that urges her to get even closer by becoming Arak’s mate.

Making the wrong choice could mean her life…

This was my first read of this whole new “Krinar Kindle World” launch, despite the fact that I am reviewing it last.

I have read and enjoyed Bristol’s Breeder series, so I was looking forward to reading her addition to the world Anna Zaires created with her Krinar series. Also, I was just plain excited to read more about the Krinar, period.

This was a fun and sexy read and I definitely enjoyed it.

That said, I didn’t expect there to be any furthering of the Krinar world…and I was 100% correct in my assumptions. After all, I wouldn’t expect Zaires to allow another author to write any big plot points that could change the course of the entire series.

This – and all of the other Krinar World stories I have read so far – are more like periphery snap shot stories. They take place in the Krinar world and involve Krinar characters, but they definitely aren’t here to propel the Krinar Universe forward.

Thus, as long as you don’t go in expecting any major plot themes here, I think you would enjoy this story for sure, as I did.

Cara Bristol can spin a smut tale, that’s for sure.
I look forward to more from this author.