In this second of the sultry, Western-set Coming Home series from New York Times bestselling author Harper Sloan, Quinn Davis might finally have a shot at her own happily-ever-after—but will she let love in, or will she tell it to go ahead and kiss her boots?

Quinn Davis prefers to live her life quietly. She’s the stereotypical tomboy with two overprotective big brothers who have always been there to protect her, especially from devilishly handsome cowboys with silver tongues. That is, until Tate Montgomery comes riding into town. Their first meeting, however, is far from something out of a fairy tale and only further convinces Quinn that men aren’t worth her time.

The only place Tate Montgomery ever truly felt at home growing up was during the long, sweltering summer months he spent at his Gram and Paw’s farm in Pine Oak, Texas. Now, Tate has returned to his childhood sanctuary seeking a fresh start—but if he’s being entirely honest, he’s not just back for the wranglers and Stetsons. During those summers, Quinn was a friend-turned-young-love who Tate lost when life threw him a curveball and he cut all ties to his past; but all it takes is one glance at the raven-haired beauty he did his best to forget for him to realize just how much he’s been missing…. 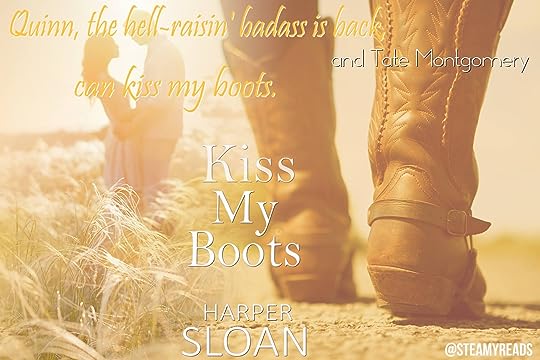 Wow! This was so awesome. Harper Sloan has fast become a one click author for me and I’m yet to read one of her stories that I don’t get fully invested in and devour. After finishing book one in the Coming Home series, Lost Rider, and falling in love with Quinn, I could not wait to get my hands on Kiss My Boots and read Quinn’s story. I loved every minute as I knew I would.

As stated above, we first meet in Quinn in book one of the series. She is Maverick’s sister and Leighton’s best friend. I absolutely fell in love with her, she was everything I had hoped for and then some; she’s feisty and sassy with a smart mouth to boot. She says exactly what springs to mind with no thought for the aftermath or the consequences that may arise. Plus she fixes cars and has no problem getting dirty and being one of the boys. I have a real soft spot for tomboys and Quinn epitomises what I love about a strong heroine.

For nine years now Quinn has kept her heart locked up and completely given up on the prospect or the idea of love. She was left utterly heartbroken by the one and only person she has ever loved and has never fully recovered from this pain. Her mindset was that if she didn’t open her heart up to anyone again, she wouldn’t risk the chance of being hurt the same way. So what happens when the one person who broke Quinn’s heart nine years ago returns to town? Will she let him back into her heart? Will he even have a chance to win her back?

“He taught me trust.
He showed me love.
Then he gave me pain.”

Tate Montgomery is the man responsible for leaving Quinn completely shattered and heartbroken all those years ago. He had left without explanation and was never to be heard from again, that is, until now. Well he’s back and his main focus is on trying to get Quinn to understand his reasons for leaving. Tate will stop at nothing to win back Quinn, though it’s not going to be easy because Quinn is definitely no doormat. Quinn has no problems standing up and voicing her opinions and there is also the fact she doesn’t think she can go through that kind of pain again.

Tate is such a loveable character; he’s charming, sweet and an all-round good guy. Quinn didn’t stand a chance to be honest, one alluring look and Quinn’s panties literally melted. Tate can thank Homer for bringing them back together again. Who’s Homer you may ask? Well you’ll just have to read to find out. Plus Tate also happens to be the new gyno in town which in itself is guaranteed to make for a fun ride.

Kiss My Boots was such a fun-loving, well written easy going story that I devoured in one sitting. It is a complete stand-alone, so you don’t have to read Lost Rider first, but I strenuously suggest you do. Not only will you get a better understanding of the characters involved, but it is such an awesome series so far and you won’t want to miss out. I wait with baited breath for the third instalment, Clay’s story Cowboy Up. I know that if it is half as good as the first two I’m going to love it.

I think it’s pretty safe to say I would highly recommend this story to anyone who loves second chance love stories involving an absolutely badass heroine and a sweet lovable hero who will stop at nothing to win back the love of his life. This story is just pure awesomeness. Check it out, you know you want to. That’s all folks!

Harper is a NEW YORK TIMES, WALL STREET JOURNAL and USA TODAY bestselling author residing in Georgia with her husband and three daughters. She has a borderline unhealthy obsession with books, hibachi, tattoos and Game of Thrones. When she isn’t writing you can almost always find her with a book in hand.