When I was ten, my father indoctrinated me into the family.

A brotherhood who would fight, protect, and give their lives for one another. A club whose ties ran thicker than blood, murkier than the dirt and grime that tainted my soul. Stronger than the bonds that connected me to my own family.

A band of brothers, where loyalty was kept and paid in a currency of blood.

When I was twenty-seven, I betrayed that brotherhood.

I’ve spent every day since running, avoiding paying back that debt.

My name is Daniel Johnson. I have betrayed everyone I ever loved.

And I’ll betray her too.

This is my story—if you’re screwed up enough to want to read it.

Warning: Kick contains graphic violence, profanity, drug use, and explicit sexual situations of a taboo nature. Intended for an 18+ audience only. Not intended for pussies. 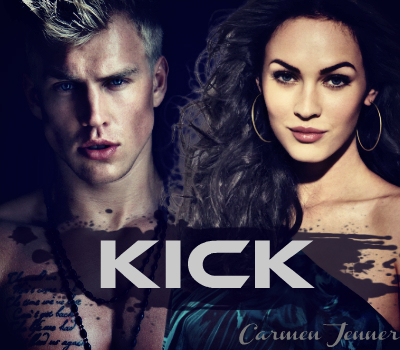 This book blew me away. If you expect “Kick” to be your usual MC novel where the hero falls head over heels for the heroine and they live happily ever after…think again. “Kick”was a very dark, gritty, disturbing with many graphic scenes tale that for sure will make you cringe, but it will captivate you at the same time. I’m still more than surprised that I enjoyed this book, because honestly I’m not a fan of MC novels. Almost all of them bore me to death. Well, let me tell you, “Kick” was anything but boring – like I mentioned above it was a dark, which if I’m honest was one of the reasons I enjoyed this book as much as I did, it was well written, the MC’s lifestyle was vividly portrayed and the two main characters were exactly like I wanted them to be – deeply flawed, yet very entertaining. Needless to say, “Kick”was one of the best MC novel I’ve read so far.

“I’m not the hero in this story; I’m the motherfucking villain.”

“Kick” is the first installment in Carmen Jenner’s MC series entitled “Savage Saints MC” and tells the story of Daniel ‘Kick’ Johnson. Kick was born into the club life. He had to act “properly” from an early age. So he had to grow up fast and hard. Needless to say, he’s like any other biker – ruthless and violent. But Kick is more than that, he is more than tortured, he’s f@cked-up, he’s damage beyond repair.

Years ago, Kick betrayed his former MC, in the process losing the only thing that mattered to him. This experience ruined him. Now he’s bitter, he’s hollow, he’s soulless…until he meets someone who’s as f@cked-up as he is.

“I love the broken ones because for a brief second, in the heat of the moment, I can forget how fucked up I truly am inside.”

Kayla ‘Indie’ is tortured and alone ‘in the dark’. At first she doesn’t comprehend why Kick wants so badly to ‘save’ her and also why she responds to him like she does, but as she gets to know him better she realizes in some way he’s the perfect match for her.

The story is written both in the present – from the two main characters’ perspective and also in the past only from Kick’s point-of-view. Both ‘the present’ and ‘the past’ were written well and as the story unfolds you will find out that every chapter from the past has a certain importance for what happens in the present. I honestly enjoyed both the past and the present, but I wouldn’t have minded to read more chapters in the present.

The story was action-packed, gripping from the very beginning with a couple of scenes that will make you cringe and/or keep you at the edge of your seat.

Kick was not your usual hero. I actually don’t know how to call him – a hero or an anti-hero. I guess he was a little of both. He’s like I said at the beginning – a criminal without conscience, a brutal man who doesn’t care about almostanything. However, IMO he was a likeable character. Not only because you will sympathize with him at some point, but because he actually has a heart. You will be convinced by that as the story progresses. Indie was a very likeable character to me. She is strong and feisty and also determined at some point in the story to fight for her life. She’s definitely a survivor.

”Darkness doesn’t seek out the light. It smothers the light, and it revels in the light’s death. And there is nothing more dangerous than darkness that doesn’t have an outlet.”

Kick and Indie’s relationship was unconventional to say the least. Their interactions are not sweet and fluffy. In spite of that, they felt good together and also believable. And one of the reasons for that is because both these characters had depth. The supporting characters were engaging, interesting and I’m looking forward to read more about the other MC brothers.