For Sean Wright, driving a cab in the tiny Navy town of Anchor Point isn’t an exciting job . . . until he picks up just-dumped Paul Richards. A drive turns into a walk on the pier, which turns into the hottest hookup Sean’s had in ages.

After a long overdue breakup, Paul can’t believe his luck. Of all the drivers, he’s picked up by the gorgeous, gay, and very willing Sean. Younger guys aren’t usually his thing, but Paul can’t resist.

One taste and neither man can get enough . . . right up until they realize that Paul is Sean’s father’s commanding officer and the last man Sean should be involved with.

With two careers on the line, their only option is to back off. It’s not easy, though; the sex and the emotional connection are exactly what both men have been craving for a long time. But Paul has devoted twenty-four years to his career and his dream of making admiral. If he’s caught with Sean, that’s all over. He has to choose—stay the course, or trade it all for the man who drove off with his heart. 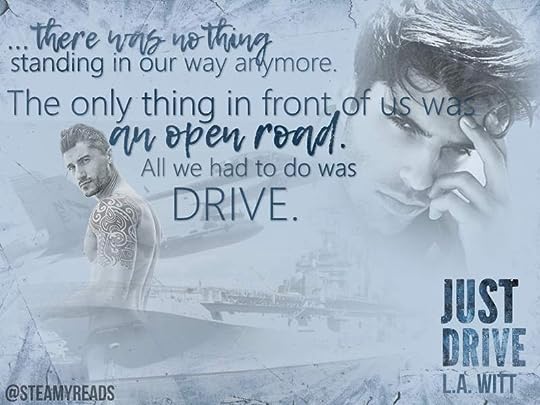 ➦I’m super duper behind on my reviews so I’m gonna make it short. L.A. Witt is a new to me author and I have to admit I enjoyed the writing a lot. I’ll definitely be on the lookout for more of her stuff in the future 🙂

➦This novel is about Sean, a young college student who who lives with his father and is a dependent of the Navy. He has been moving wherever his father gets stationed and drives a cab at night for extra income.

➦One night Sean picks up a very attractive stranger who wishes to drive around without destination in mind. Paul is much older than Sean and seems to be going through a breakup. Sparks fly and these two start an affair until they realize that Paul is Sean’s dad’s commanding officer.

➦Will they be able to stay away from each other? Is Paul willing to risk his career for Sean? How is Sean going to react to coming in second to Paul’s and his dad’s career?

➦If you enjoy M/M novels that are a bit on an angsty side you might like this one here. There’s a definite age gap – Paul is the same age as Sean’s dad. So just keep that in mind.

➦The story is pretty steamy and definitely not slow burn but the pace of the story is a bit on the slow side. I’d say it was a pretty steady pace but I found myself getting a tiny bit bored somewhere in the middle. But thankfully it picked up and finished strongly. I might or might not have shed a happy tear at the end. I’ll never tell! Laterz, need. to. write. more. reviews!!!